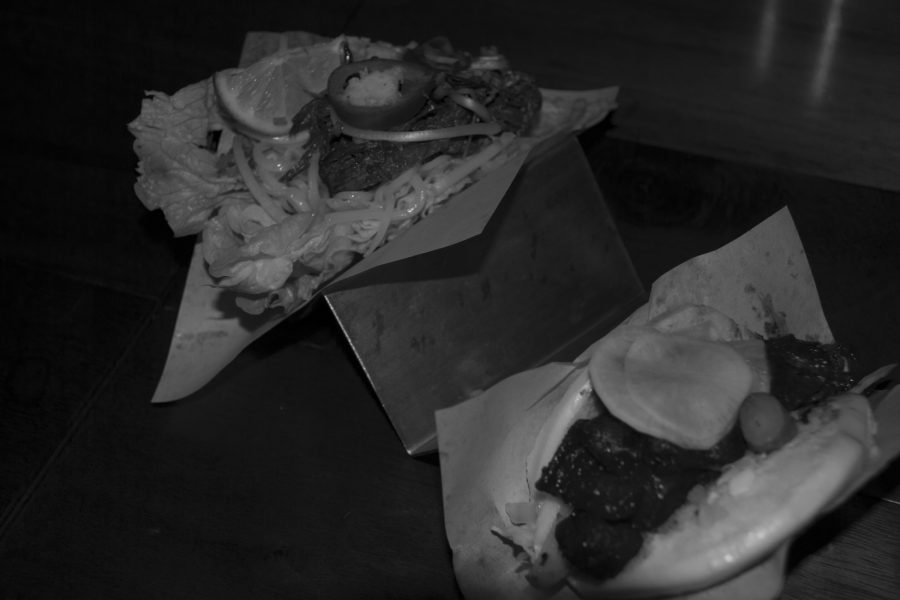 Given the rising popularity of quick, casual street food, it’s not surprising that East Street Tacos, located in downtown Mountain View’s Castro Street, opened in January to take advantage of the trend. The fare is described as “comfort food,” delivering an upscale take on a sidewalk classic: street tacos.

The tacos are derived from a wide array of cultures: there’s Asian-style cuisine, Mexican fish tacos and even some American selections. A variety of meat choices are available, as well as a handful of vegetarian options. Everything is served inside either soft or crispy corn tortillas, lettuce wraps or steamed buns known as bao. When placing an order, you have a choice of shells, although the restaurant has their own recommendations on which should accompany each taco.

An immediate, glaring fault is the uneven ratio between price and quantity: simply put, the tacos are small but uncomfortably expensive. On average, a single taco will run about $5, with some of the more premium options coming to more than $6. If they were decently-sized, this wouldn’t be as much of an issue, but this isn’t the case. Each taco takes about around three or four bites to finish, making it almost a necessity to order several per person. There is a combo deal available: 4 for $19, or 10 for $45 — a better value, but still excessive. For the price, the food should have been outstanding, a true elevation of a humble dish into something memorable. It didn’t deliver.

The thai duck curry and the “tikka chicken” tacos were both bland and felt inauthentic — neither option really captured the essence of a complex, spice-rich curry that I was hoping for.

The phở taco was, surprisingly, pretty good, although it felt like a trite continuation of the restaurant’s apparent theme of taking a well-known cultural dish and shoving it inside of a taco. The bulgogi beef option was also decent, but ultimately disappointing: the meat didn’t have the same juicy, fresh-grilled flavor of a cut from a legitimate Korean barbeque.

To my great relief, the miso truffle pork belly taco was a success. This was the food at its best: authentically Asian (or Asian-fusion, if that’s even possible) and flavorful, the bao providing a pillowy base for the tender cut of meat. It felt real, not just like a taco-ized rehashing of a classic dish. Unfortunately, this was the only item on the menu I would recommend, and even this comes with some caveats: it still isn’t worth the steep $6.25 cost.

One would expect a better-than-average experience at this price point, but East Street Tacos failed to come through on this end, as well: the bored-looking wait staff milled around the tables lackadaisically and the decór felt like an awkward, vain attempt to be cool.

The bottom line is that East Street Tacos isn’t worth it, for now. The menu is tenuous, combining a few admittedly fair selections with some duds, and it’s too expensive for what it is. It seems tailored for a more adult crowd, probably some newly minted Silicon Valley tech workers who don’t see any problems whatsoever with paying five bucks each for something that originally started as street food. I can’t foresee many reasons why a student, especially one who is strapped for cash, would choose it for lunch or dinner given the wide selection of decent, more affordable places within walking distance.