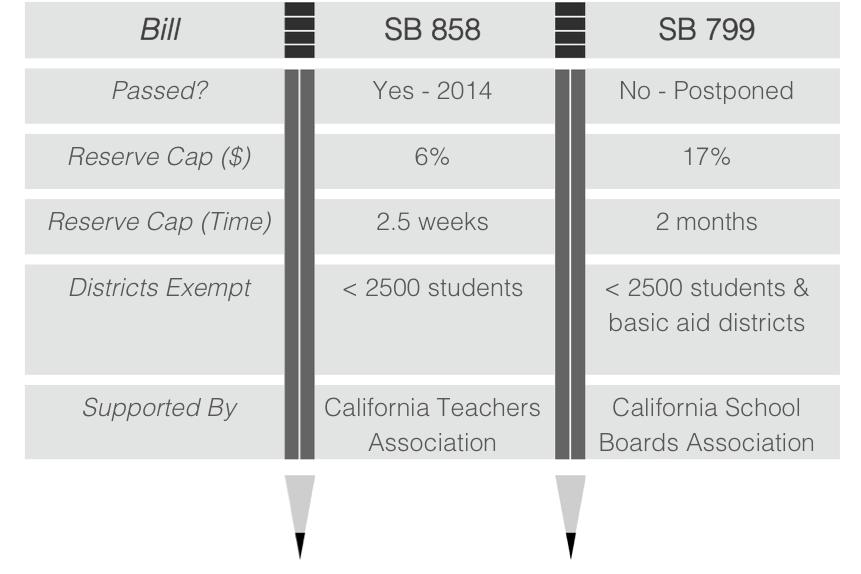 On Friday, September 11, Senate Bill (SB) 799 failed to make it out of committee, ensuring that it will stay in limbo until the legislative cycle starts next January. The bill was introduced in March of this year by a bipartisan group of lawmakers intending to amend SB 858.
SB 858 was passed in 2014 and mandated that California public school district reserves will eventually be limited to 6 percent of their budget if a series of requirements is met. The Legislative Analyst Office estimates this will not occur for at least three years.
If passed, SB 799 would exempt from the cap districts like Mountain View-Los Altos that receive a minimum amount of funding from the state, called basic aid districts. In addition, districts with less than 2500 students would also be exempt. More importantly, SB 799 would allow districts a reserve of 17 percent once the requirements are met, giving districts emergency funds equivalent to two months worth of payroll. In 2014, California public school districts were allowed to maintain monetary reserve levels at their discretion.
The bill failed to move forward because of conflict between interest groups, which failed to compromise on details of the bill’s language. Proponents of cutting reserves argue that districts should spend more on employee salaries and students.
“We saw programs get cut [and] nurses laid off,” California Teachers Association lobbyist Estelle Lemieux said in an assembly committee hearing on education. “Librarians, counselors and a lot of educators got laid off, over 30,000, and that’s not counting our parent educators, our support personnel. We believe [this is] unconscionable, to know that reserves [are] growing at the expense of our students in this state.”
Proponents of higher district reserves argue that leaving reserves at 6 percent — equivalent to less than three weeks of payroll — threatens not only the financial health of a district, but also its pledge to employees.
“I believe that taxpayers give their money to spend on kids [who are] in school now,” Associate Superintendent Mike Mathiesen said. “As a school district, we should not be in the business of building up a huge reserve. But, we need to balance that with [the idea that] we are responsible for maintaining the financial solvency of the district. Much like in personal finance, I try not to live paycheck to paycheck.”
While it is uncertain whether a compromise will be reached before districts are forced to cut reserves, one way for districts to avoid mandatory cuts is to earmark specific money as committed reserves, funds designated by the Board of Trustees for a specific project.
Under SB 858, committed reserves are not counted as a part of a district’s overall reserves, meaning those funds are not affected by SB 858. However, the district does not follow an official process of committing reserves.
“Our board historically has not committed money [to reserves],” Mathiesen said. “They are aware of it… [Instead] districts like ours have said, ‘[The money is] for explicit purposes. So let us name what those purposes are and move it out of the general fund so it does not have the appearance of ‘Look at all this money you have sitting there for no reason.’ We have a reason for it.”
In the event that the cap takes effect, the district plans to apply for a year-long exemption from the Santa Clara County Office of Education in order to determine their next steps. Currently, the district has a general reserve of around $4.6 million ― roughly 8 percent of the district’s budget ― which accommodates the diverging interests of groups in the district.
“District administrators often want to hold [some amount] of money in reserve,” Mathiesen said. “[And] labor unions want to hold less because they want more for salaries. So, you’re built up with that tension. I think in our district, we have been very good at maintaining that balance.”