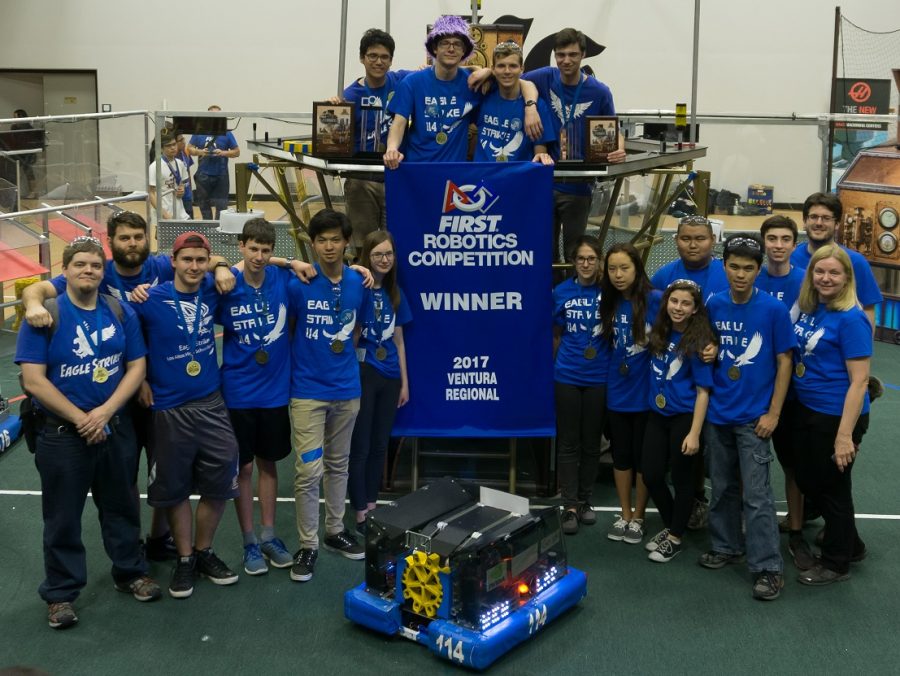 By Danny Vesurai and Justin Yu

For the first time since its inception in 1997, the Los Altos Robotics Team won a regional competition. By winning, they qualified to the international level.

From Thursday to Saturday, March 16 to 18, the team took first place at a regional competition in Ventura. The For Inspiration and Recognition of Science and Technology (FIRST) organization hosted the regional, with 42 teams in attendance.

“It’s pretty insane,” co-captain senior Joey Hejna said. “There are a lot of teams that win all the time but our team has never won, so for us it was really different to win an entire regional.”

By winning the regional competition, Los Altos qualified for the international FIRST Championship, which will take place in Houston from Wednesday to Saturday, April 19 to 22.

After a day of practice rounds and fine-tuning robots, Los Altos started the three-day regional tournament with 11 two-minute qualification matches, in which they were randomly assigned to three-robot teams called “alliances.” Competing to earn a high seed, two alliances — six robots in total — would square off on a 54 by 26 feet arena and score points by placing plastic gears on pegs, shooting balls into goals or hanging on a rope.

While Los Altos felt confident entering their qualification matches, their second qualification match left their robot unresponsive to commands from its driver. Both Los Altos and the tournament’s field techs, designated to help solve technical issues, could not identify the problem.

“We still don’t know what the issue was,” driver and co-captain senior Cole Brinsfield said. “After the 2nd round, it felt like [the robot] was running out of power as we were moving, then just stopping.”

The team eventually resolved the issue after they reinstalled their software, but the problem had left Los Altos’ robot dead for three matches. The team finished the qualification rounds with a win-loss record of 4-7 as the 32nd seed out of 42 teams.

On the last day, elimination matches started. The eight highest seeded teams picked two other robots of any seed to form an alliance and fight for the championship. Alliances would advance further in the elimination bracket after beating an opposing alliance in a best-of-three match.

Despite their low seed, the team’s spirits were lifted when Chilean Heart, an international team from Chile seeded sixth, picked Los Altos to be part of their alliance. In qualification matches, Chilean Heart had noted Los Altos’ scoring potential due to their unconventional swerve drivetrain, an omnidirectional base that allowed the robot to move in any direction and easily change orientations.

“Chilean Heart recognized that we were fast and could score well with our swerve drive, so they picked us,” Joey said. “It’s something [our] team has never done before but it’s very, very fast, and it allows us to move quickly and avoid obstacles really well. In order to place gears quickly, you need a fast robot and a fast reaction system, so we went for the swerve drive.”

As Los Altos progressed through the elimination matches, they found that their decision to use a swerve drive paid off by allowing their robot to easily sidestep opponents’ defending robots and still manage to score gears. Their alliance would end up achieving the highest scoring run of the day.

“[The swerve drive] made avoiding defense very easy because we could get pushed around [by other robots], but I would just adapt to the scenario and keep [driving] forward,” Cole said.

Making their way up the bracket, Los Altos had little time between matches to repair their robot. When they reached finals, they had to borrow a battery from the opposing alliance. It was a close match against the opposing alliance, but Los Altos’ alliance ultimately won the final match and qualified for the FIRST Championship.

“In the very last round, it took us down to the final game,” Davis said. “For me, I sat there in the last match, thinking, ‘I’m so proud of [the team], and I just hope we do it.’ [When we won,] I was almost in tears because I know how hard they have worked.”

In addition to winning the regional, the team also received the Innovation and Control Award for utilizing a DJ turntable to control the robot’s orientation and joystick to drive the robot.

“I’m moving a joystick [to move the robot] in the X and Y directions, but to actually spin the bot, I spin the [turntables],” Cole said. “It’s quite intuitive in that… the faster I spin, the faster [the robot] will rotate.”

Davis believes an important factor in this year’s success is its experienced leadership and hardworking members. The team’s four senior captains have all been on the team since their freshman years.

“Our senior student captains who run the team have all been on the team for four years, so they have a lot of experience,” Davis said. “It’s a great moment as a teacher when you see your students’ excitement, their ‘Oh my gosh, we did it!’ Everybody’s excited and everybody’s worked together… to create a pretty impressive level of engineering.”