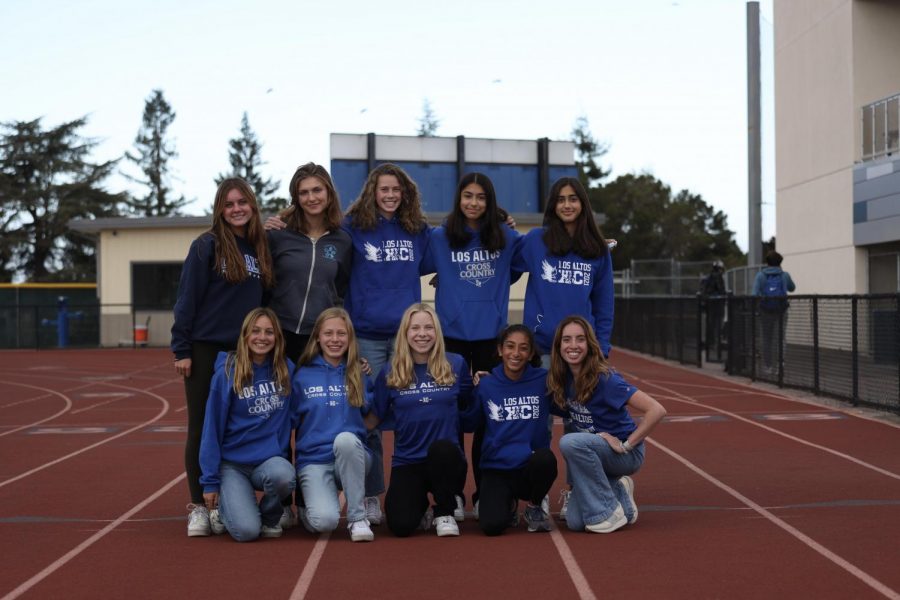 The varsity girls cross country team this year is the best team Los Altos High School has ever had. The team consecutively broke the school team record at both the Crystal Springs and Baylands league meets. Their outstanding performance had qualified the team for the Clovis Invitational, one of the largest cross country meets in the nation.

Prior to the invitational, Head Coach Steph MacKenzie and the varsity girls debated whether they should enter the championship race, which is more competitive than the regular varsity division race. Ultimately, the seven top runners, Riley Capuano, Fiona Bodkin, Jasleen Sidhu, Maddy Randall, Ella Fadil, Cameron Cox and Shelli Lewis, decided to take on the challenge and became the first LAHS team to run in the championship race.

“[The championship race] had two or three of the teams that would be considered the best in the United States,” MacKenzie said. “So it was not just the best in California but the best in the country that the girls were racing against.”

The competitiveness of the race pushed the runners through their limit and broke the previous school team record set in 2013 by three minutes and 26 seconds on Saturday, October 9, setting a new record of 96 minutes and 55 seconds and finishing 15th out of 21 teams in the championship race.

“[Except the top two runners], the other five runners were literally in the back after about 1,200 meters because that’s just how fast it is,” MacKenzie said. “In their first mile, even though they were at the back of the pack, it was still the fastest they’ve ever run for a mile.”

Motivated by the large crowd of elite runners, all seven girls broke their 5 kilometer personal record during the championship race.

“I didn’t even know I was in the very back because everyone was going so fast,” senior Cameron Cox said. “It was definitely a bit intimidating with everyone stampeding. But I caught up 50 places eventually.”

Similarly, Sophomore Jasleen Sidhu surprised the team by passing people left and right in the last few hundreds meters and ended up as the third runner on the team.

While cross country is often recognized as an individual sport, teamwork and community served as an advantage for the varsity girls team. As closely bonded friends, the team drives each other to achieve their best.

“They set this goal as a team that they want to qualify for the state meet,” MacKenzie said. “So they know when they step on that course it’s not about the individual because when you’re just focused on yourself, you can get complacent. However, when you know your teammates are counting on you, you push yourself to the best.”

During the championship race, every runner on the team moved up in position throughout the race after the initial setback. They were able to depend on each other and maintain a strong mental game, according to MacKenzie.

“We just have so much depth this year, and every single person carried their weight,” senior Riley Capuano said, who was the first runner at the championship race. “The top five scores were all super close so we just crushed the school record, because every single person is very strong.”

While they support each other during races, the team also motivates each other through competition. Since the beginning of the season, the placement of the top seven runners continued to change as they improved and shifted in the rankings.

“We all love each other but we’re all competitive,” Riley said. “We all want to be the fastest. We all have someone on the team who is around the same pace and speed that pushes each other, and that’s why we’re getting so good. It’s a really good competitive aspect to have because I don’t think I would be as good as I am and Fiona [one of the top runners] would be as good as she is if we didn’t have each other.”

Beyond just teammates, the secret to the team’s success came from hard work and their coach’s efforts.

“Coach Steph gives us really hard workouts,” Riley said. “Usually one day a week we’ll do hills. Everyone after the Clovis race said they passed a bunch of people on the hill because we’re good at hills. Coach Steph also really emphasizes taking our hard days hard and easy days easy so we’re all staying injury-free.”

So far this season, the girls varsity team has been fluctuating between the first and second place in the league. If they continue the momentum they currently have, they have a promising chance of qualifying for CCS.