Reconnecting with her roots at the hearth of Jewish culture 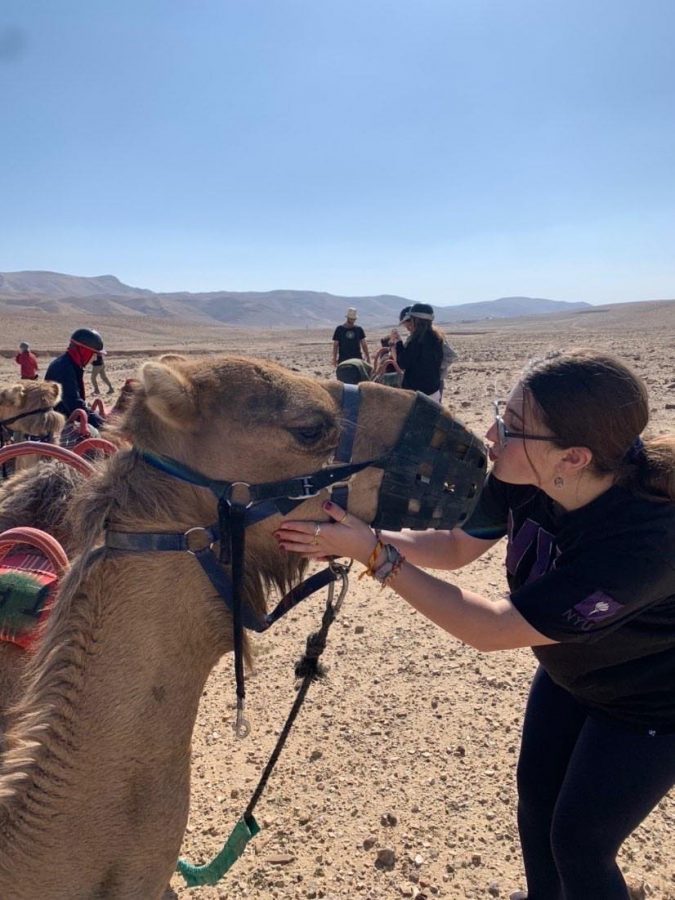 Sophomore Gabby Farber is spending her second semester abroad in Jerusalem, as part of the Tichon Ramah Yerushalayim (TRY) program. Through this experience, she hopes to establish her cultural identity.

By Kaavya Butaney and Rachel Rudyak

Discovering your identity as a teenager is a rite of passage: whether that be finding a trusted group of friends or deciding your future career, you are expected to know who you are by the time you graduate high school. But where do culture and religion belong in those self-discoveries?

When sophomore Gabby Farber started at Los Altos for high school, she was confronted with an unexpected isolation after attending Gideon Hausner Jewish Day School, a tiny private Jewish school, for kindergarten through 8th grade. At Hausner, Jewish culture was ingrained into her school community through daily Jewish and Hebrew studies. Earlier in her life, she almost took her exposure to Judaism for granted; however, her new school environment illuminated the importance of Jewish culture within her identity.

“I lost a big part of my Judaism and my learning because I’m not able to do it during school anymore,” Gaby said. “I missed it and it was a big motivation for me to figure out who I am as a Jew and how I can observe Judaism here at home.”

Gabby is part of a large Russian Jewish community in the Bay Area. She’s been a powerful advocate for standing up against anti-Semitism at Los Altos and has always been heavily involved in her community.

“My great-great-grandparents were in the Holocaust, and they weren’t able to practice their Judaism in the same way I can,” Gabby said, reflecting upon Judaism’s role in her family history. “Being able to practice it here is my privilege.”

However, her transition to Los Altos left her feeling culturally and religiously disconnected from her Jewish heritage, leading her to the Tichon Ramah Yerushalayim (TRY) program.

TRY invites Jewish students from North America to study and live abroad in Israel for two or four months and focuses on immersing students in the culture. A few of its featured activities include Hidnadvut, or volunteerism, with the local elderly and at soup kitchens, traveling throughout Israel and organizing social opportunities for participants to bond with native Jewish teens.

“I’m nervous,” Gabby admitted. “Hopefully, I’ll be the happiest I’ve ever been. But it’s possible I will not enjoy it.”

In addition to her worries about the trip, applying to TRY was not all smooth sailing for Gabby. Although she wanted to join the program, she was concerned about keeping up with her necessary high school credits while learning about Jewish and Israeli history in the program and frequently traveling all at the same time. In the beginning, she was convinced that it was impossible to spend one semester abroad, due to the logistics of leaving and returning to Los Altos, and attempted to talk herself out of it. However, the longer she thought about it, the more Gabby realized she desperately wanted to go and would do whatever it took to make that happen.

“Now’s the time to do it,” Gabby remembered thinking to herself. “But my parents were like, ‘There is no way we’re sending you to another country as a 15-year-old girl.’”

So Gabby created a 200-slide PowerPoint presentation for her parents, drove her mom to San Francisco to meet TRY’s Director and Head of School in person, and talked with her counselors to figure out how to unenroll from Los Altos and come back. She even paid for over half of the program’s costs.

What this trip will hopefully give Gabby is a sense of relativity, as in which congregation or branch of Judaism she will follow, and further, how she’ll practice Judaism in her life. Will she break Sabbath to drive to a synagogue? Or will she pray at home?

“I don’t want to wear long skirts,” Gabby asserted, referring to Orthodox Judaic customs. “I don’t want to be unable to touch boys before I get married. I don’t know what values I have, and I need to figure out more about myself, where I am with Judaism and what I believe in.”

Gabby left for Jerusalem on January 26, and she will return once in February and then at the end of the semester.