Reactions to the 2015 Paris Attacks 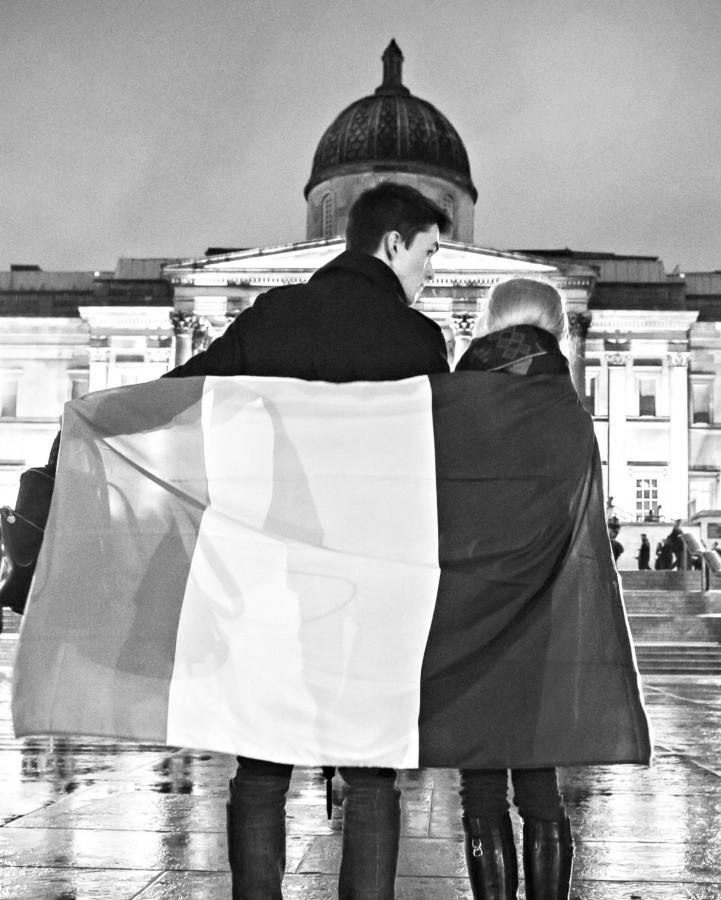 People in London’s Trafalgar Square held a French flag in solidarity with the victims in Paris. Paris received an outpouring of mourning worldwide following the ISIS attacks, both in person and via social media.

By Hanna Khosravi and Emily Aoki

In a multitude of different ways, social media has completely altered the way we disseminate information about the tragedies that take place in our world. Words spread virally, and humans, irrespective of where they are on this earth, get to express their opinions regarding such controversial topics more openly and vociferously.

In early November, Paris was rocked by a series of coordinated attacks by the terrorist organization ISIS. The immediate reaction in the media was one of mourning, the news punctuated by an outpouring of prayer for families who had lost loved ones and for the city of Paris itself.

Coupled with this massive display of empathy though, was a troubling question. A nearly identical attack in Beirut, occurring a week prior, also carried out by members of ISIS, garnered a fraction of the media coverage and general outcry which Paris had received.

With this growing sentiment, the Internet exploded with messages of lament not only for Paris, but for the overlooked city of Beirut. Anna Ciezadlo of the Washington Post wrote that even the way that the media talks about the different attacks matters. The neighborhood bombed in Beirut, Bourj al-Baranjeh, was not described as a neighborhood or a place filled with living, breathing families and innocents who have seen far too much violence, but rather a “Hezbolla Stronghold” where things like this inevitably happen because of the city’s geographic location on a map.

Perhaps Ciezadlo captured it the most apt way possible. “Paris is a city,” Ciezadlo said. “Beirut is a ‘war-zone’.”

The assumption that terrorist attacks simply “happen” in places like Lebanon, Syria and Iraq while in an elegant Western city like Paris such tragedy may be news worthy began to be attacked by writers and regular social media users everywhere. The question that started popping up on Facebook, Twitter and other social-media outlets around the globe was whether it is fair that we turn a blind eye to the Middle Eastern countries currently rocked by warfare. In fact, should we not have more of an emotional response to these nations that have been enduring war and displacement for so many years?

The Atlantic dubbed this idea as an “Empathy Gap,” articulating that the disparity has never before been seen so clearly as the present day.

“It’s become a predictable pattern: One act of violence in the world overshadows a similar, concurrent violent act, inviting a backlash against this imbalance in scrutiny, sympathy, and grief,” David A. Graham of The Atlantic said. “But that predictability doesn’t make the pattern any less distressing. Each time there’s a major terror attack in an American or European city —New York, Madrid, London, Paris, Paris again — it captures the attention and concern of Americans and Europeans in a way that similar atrocities elsewhere don’t seem to do. Seldom do events line up so neatly, offering a clear comparison, as the bombings in Beirut and the rampage in Paris.”

This inequity extends to practical measures as well. In the wake of the French bombings, Facebook brought into effect a “Safety Check” tool for Parisians to affirm their safeness for relatives and friends in the panic immediately following the news. The similarly endangered Lebanese, however, had gone “Safety Check”-less.

“When the blasts went off in Beirut, there was no ‘safety check’ on Facebook for Lebanese — or Syrians or Palestinians — living in Bourj al-Barajneh,” Anna Lekas Miller of Rolling Stone Magazine said. “There were no visible solidarity demonstrations, showing support and compassion for those who lost their lives.”

People soon began to change their prayers for Paris to prayers for all of humanity struggling against the cancer that is ISIS. It is integral to remember the nations who are exposed to this violence constantly — just because they happen to be in the “war zone” does not mean that we must neglect their troubles. It means that we must emphasize them even more.

This gap in coverage is indicative of the social problem of uninformed, fashionable support and grief. We are all familiar with Facebook’s “Change your profile photo to support France and the people of Paris” campaign. The day following the attack, Facebook was painted in blue, white and red. Above all else, this is a tremendous and noble gesture rooted in a kinship with our French allies. But it must be mentioned that when compassion and shared grief become trendy, we lose something. We add a superficial frame to something tragic. And this sort of thinking can foster uninformedness, and ultimately, forgetting.

It shouldn’t just be “cool” to put a filter on your photo to support a grieving city. It’s great that Facebook can help educate people on issues they may not have prior been exposed to, but it enables those who understand very little about the global conflicts that led to this type of terrorist action to express a sort of false support for Paris and the French people due to peer pressure.

Irrespective of these discrepancies, however, what happened in Paris is unforgivable and an affront to the entirety of humanity.

Paris will eventually win, as it has seen atrocities far worse than this — it has been the battleground for the French Wars of Religion, experienced the most dramatic revolution in history, the reign of the dictator Napoleon Bonaparte, a war with Russia, Nazi occupation, and an endless history of adversity. And yet, Paris has risen to win every single time and is known to be one of the most stunning cities on the planet.

Those who open fire on innocent people are cowards, irrespective of their religion, ideology, creed, cause or nationality. Human history has shown us repeatedly that in the end, cowards never win.