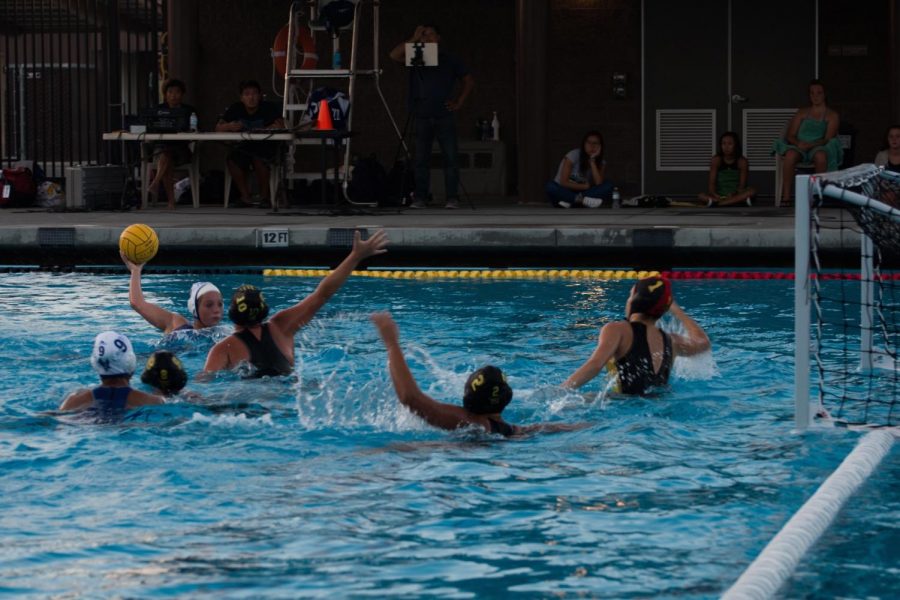 Los Altos' offense moves the ball around in front of Mountain View's goal at their meeting on September 12.

With over 200 goals and 300 points scored, the varsity girls water polo team has advanced to the Division I CCS Championship. Although they ended the league with a 6-6 record, the girls have advanced up the bracket to reach the finals against cross-town, long-time rival Mountain View High School tomorrow at 9 a.m. at Independence High School in San Jose. It’s the team’s first CCS Championship game since 2011.

“This is only the second time ever our team has been able to make it this far in CCS,” junior Kayley Gould said. “It’s going to be a new experience for all of us, and we have been training very hard to get to this point, and even harder now that we have reached it.”

Going against a team they have lost to three times this season, the Eagles have been working hard since their last 9-12 loss to the Spartans on October 3 to build up a stronger defense and offense. Though the Spartans’ 8-4 league record places them ahead of the Eagles on paper, Los Altos’ players believe they’re capable of winning — if they can settle into their rhythm quickly enough.

“The past times we have played Mountain View we have had strong second halves, so if we play the way we did in those second halves we will be in a pretty good place,” junior Alex Warren said.

The team has worked to level their skills and make stronger offensive plays. Despite consistently strong performances from top scorers like seniors Julia Santos and Brynn Walther, the girls will need to tighten up every aspect of their game to compete with Mountain View tomorrow.

“In order to win CCS, we need to clean up our turnovers and half-court offense,” sophomore Olivia Cairns said. “Oftentimes we dominate on the counterattacks but struggle with our half-court offense. It is important that we work hard in practice to improve our offense and passing under pressure.”

With high stakes and pressure, the girls rely on their team bond to persevere to the very end of the game. The team is comprised of many newcomers that were pulled up from JV specifically for CCS, and have to re-establish a new dynamic and rhythm. Although the girls have demonstrated great maturity and unity as a team, tomorrow’s game will rely on their ability to communicate in the pool.

“A big part of water polo is communication,” sophomore Alesia Piercy said. “You can’t see the whole pool, you’re leveled with everybody else, there are people blocking your vision, there’s water getting splashed everywhere, there’s a lot of chaos. So [the] one thing that is really making us and breaking us is the communication. Some days we are talking and we know exactly what we are doing other days some girls are doing this play another girl is doing something else.”

With this preparation, the Eagles are ready to come into Saturday’s game against the Spartans prepared to leave all they have in the pool.

“We need to come in and be mentally prepared for Mountain View,” coach Katie Tasman said. “It’s always been a good battle with them because the cross-town rivalry is there. I think it’s always a good game, and Mountain View, especially, is ready for us. We just need to make sure we’re ready, not intimidated, and show them what kind of team we are.”