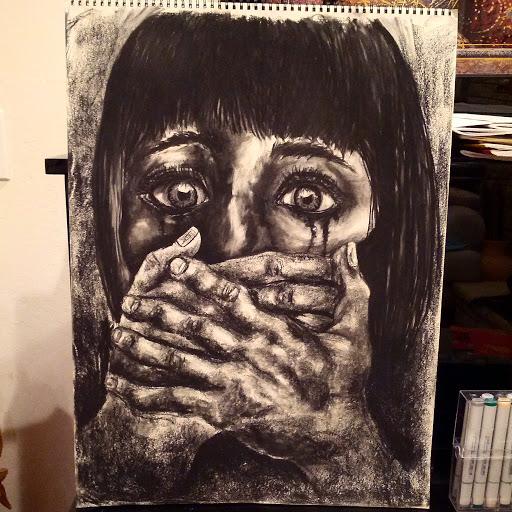 Sophomore Jerilyn Lee created the above drawing for the RAINN Art Contest. It will be on display on Thursday, March 30, as part of RAINN Week's effort to increase awareness for sexual assault. Photo courtesy Jerilyn Lee.

From Monday to Friday, March 27 to 31, the Los Altos RAINN Club will hold its first Sexual Assault Awareness Campaign, also known as RAINN Week. RAINN, or the Rape, Abuse and Incest National Network, is the nation’s largest anti-sexual violence organization, and the club will organize activities held during lunch in the quad with the purpose of educating students on what sexual assault is and how to prevent it.

Since the beginning of the school year, RAINN Club has worked on implementing a sexual assault awareness week to spread knowledge about consent and sexual assault to students. According to club advisor Kathryn Low, initiating conversations about sexual assault can be a stepping stone toward changing school culture.

“The larger goal [of RAINN] is to change school culture,” Low said. “I hope [RAINN Week]… connects people to the club itself as a place where there are safe discussions every week, facilitated by other students. And I hope that it normalizes conversations around sexual assault and what that looks like, and it hopefully promotes a healthier culture and a healthier, more out-in-the-open mentality.”

“The larger goal [of RAINN] is to change school culture,” Low said. “I hope [RAINN Week]… connects people to the club itself as a place where there are safe discussions every week, facilitated by other students. And I hope that it normalizes conversations around sexual assault and what that looks like, and it hopefully promotes a healthier culture and a healthier, more out-in-the-open mentality.”

While RAINN Week and Communication Week were created separately, RAINN Club President sophomore Aditi Madhok and Vice President sophomore May Wang worked with Assistant Principal Suzanne Woolfolk on the sexual awareness content for both weeks. However, because Communication Week predominantly covers digital citizenship, Aditi and the administration found it necessary to implement a separate week only focused on sexual assault awareness.

“I see [Communication and RAINN Week] overlapping a little bit with the consent workshops, which talk about how to build healthy relationships or how to stop friendships or romantic relationships when we realize they’re not good for us,” Woolfolk said. “I think it’s nice that things tied together. It’s a good coincidence that RAINN Week and Communication Week are coming together at the same time.”

RAINN Week will kick off on Monday, March 27, with a flash mob during brunch. RAINN Club members will dance to a mix of Rihanna’s “Umbrella” and Gene Kelly’s “Singing In The Rain” in the quad to spread the word that RAINN Week has begun, followed the next day with the distribution of pamphlets that discuss rape myths and coping methods regarding sexual assault.

“A lot of people would argue that those are such fun, preppy songs, but that’s the thing: in order to get people on board to this, we need to come up with creative solutions… so we’re getting to a greater population using music, which is what our generation normally appeals to,” Aditi said.On Wednesday, March 29, Stanford Anti-Violence Educator (SAVE) Adam Schorin, who works in the Stanford Association of Students for Sexual Assault Prevention, will speak in the Eagle Theatre during lunch on how to positively change the media students see and the language they use.

On Wednesday, March 29, Stanford Anti-Violence Educator (SAVE) Adam Schorin, who works in the Stanford Association of Students for Sexual Assault Prevention, will speak in the Eagle Theatre during lunch on how to positively change the media students see and the language they use.

“I wanted to help develop different types of consent education, especially one that treats consent more broadly and as collaborative and less as a transaction,” Schorin said on the SAVE website. “I’m also glad to work for a program [SAVE] that also encourages discussion around sexuality, gender and identity in thinking about sexual violence.”

The next day, art submissions for the RAINN Art Contest, with the theme of rape culture’s impacts on society, will be displayed in the quad. Members of the club will judge the artworks based on how well they address the theme and provide awards to the top three art pieces. Similar to the flash mob’s dance, Aditi believes that the best way to spread sexual assault awareness at Los Altos is through mediums that appeal to students.

“The art contest is part of creating a positive media that surrounds us,” Aditi said. “I think artists have the skill and ability to impact what we’re seeing in social media, in books, in movies, in TV shows, so we’re really encouraging the artists to step out of their comfort zone and help draw something that will initiate conversations about these topics.”

On the final day of the campaign, Friday, March 31, students will reflect on what they learned through RAINN Week by writing what they will do to help prevent sexual assault on umbrellas located throughout the quad the entire day.

“We’re hoping that this symbolism of the rain and the umbrella will help the message get into [students’] brains, and they’ll try to have more conversations about rape, consent, sexuality, intimacy and relationships,” Aditi said.

Early this year, Aditi and May started RAINN club after attending the protest against Stanford student Brock Turner’s release on bail despite raping an unconscious and intoxicated woman. Empowered by the protests, they decided to work together to address the issue of sexual assault.

“Aditi and I went to the [Brock Turner] protest, and there I was able to see that there were a lot more other people who were really also interested and empowered by this, and they were also fighting for justice,” May said.

Looking forward, RAINN Club hopes to complete their website soon, where victims will be able to anonymously write and share their stories to help them heal, for others to understand the impacts of sexual violence and to initiate conversations on the topic as a whole.

“In the future, we are planning to go global and reach out to other organizations to create more improved consent and educational workshops, and also reach out to schools around us, as well as middle schools, and incorporate sexual assault prevention into the sex-ed workshops,” Aditi said.