Racism: Living on the dance floor 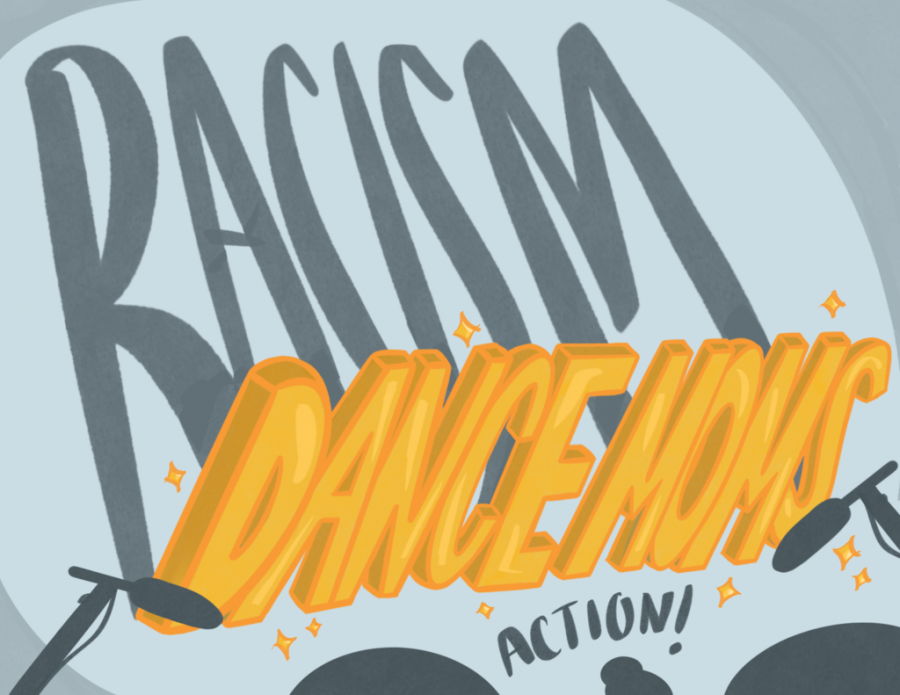 While Lifetime reality TV show Dance Moms seems like a stereotypical reality TV show in which moms fight unnecessarily over their children’s jazz dances, it has racist undertones that need to be addressed by Lifetime.

Recently I’ve seen my TikTok feed filled with videos of people reenacting the notorious scene between dance mom Kelly Hyland and dance teacher Abby Lee Miller, where Hyland nearly bit Miller’s finger off. This scene was a part of a Lifetime reality TV show “Dance Moms,” which follows the journey of talented, young competitive dancers and their mothers at the Abby Lee Dance Company in Pittsburgh, Pa, and is gaining popularity because of its unnecessary dramatics.

The show gained popularity not only because of the dancers’ talent but also because of the pugnacious nature of the mothers, as they constantly argue with Miller and with one another about alleged preferential treatment and who gets a solo. Essentially, the show consists of middle-aged women arguing over children’s jazz pieces.

With dancers under constant pressure to win, Miller’s harsh teaching methods, and the mothers’ consistent fighting, Lifetime creates a chaotic environment that leads viewers to disregard one of the show’s many underlying issues: racism.

Being one of the handful of Black dancers on the show, and the dancer that stayed on the team the longest, Nia Sioux was often treated terribly in relation to her teammates. Miller would constantly verbally berate her, and unlike the other girls, Nia was only given stereotypical “ethnic” solos in which she was often typecast. This made it seem like Nia could only do these solos and no other types because of her race which wasn’t true.

In her notorious solo “Laquifa” — and one of her only solos, Nia portrayed Black drag queen Shangela Laquifa Wadley. From the cheetah print costume to the afro she wore, everything about the solo was stereotypical and culturally insensitive.

Lifetime’s blatant racism is also clear through the portrayal of another Black dancer Nicaya Wiley and her mother Kaya Wiley in seasons three and four.

Similar to all of the moms on the show, Wiley stood up for her child and argued with other mothers who questioned if her daughter deserved her place on the competition team. Through the various seasons and episodes that the duo appeared in, Lifetime mostly aired footage of Wiley when she was yelling or angry, essentially perpetuating the age-old stereotype of angry Black women. Lifetime showed the other mothers angry as well but also portrayed other sides of them while just showing Wiley angry.

While it’s no doubt that Wiley wasn’t the nicest or sweetest on the show, the producers would purposefully exclude context in scenes according to many dancers’ and moms’ accounts. Lifetime portrayed Wiley as constantly upset when in reality there was almost always a trigger that caused her to fight for herself.

For instance, white mom Christi Lukasiak called Wiley a “hoodrat” which is a racially derogatory term, yet Lifetime still decided to keep it in the show, knowing that it would offend many. Wiley probably had to deal with comments like these on numerous occasions, explaining why she was angry, but Lifetime excluded the context of these situations portraying her as the bad guy.

When Wiley and Nicaya first joined the team, and Nicaya was introducing herself, Kendall Vertes — another dancer on the team — told Nicaya, “I’ll just call you Laquifa,” referring to the “ethnic” solo Nia had performed.

Kendall refused to learn Nicaya’s name and instead referred to her using her stereotypical view of Black culture by calling her Laquifa — except, the catch is that this never happened.

Wiley herself came out on the internet and defended Kendall, saying that the producers had juxtaposed and edited Kendall’s words to make it seem like she’d said something offensive, when in reality she didn’t.

But why did the Lifetime producers edit Kendall’s words to make her seem racist? Why did they include and perpetuate racism on the show when it clearly made the dancers and their mothers very upset and uncomfortable?

Lifetime’s producers let all this slide because the chaos of the show was gaining them popularity. With every instance of racism on the show, more viewers would tweet about it, making the show more and more popular. Lifetime exploited the sensitivity of the racist experiences many of the Black actors on the show faced for more views and portrayed their characters disproportionately, all in the means to gain more revenue.

While many of the cast members have come out on social media and addressed their racist remarks, Lifetime isn’t being held accountable and will continue to exploit instances of racism for popularity like they did for “Dance Moms” as well as another show called “Girlfriend Intervention.”

With the increasing popularity of the show on social media, Lifetime needs to address these issues with the show and give formal apologies to all the people on the show that were hurt or misrepresented by their racist tendencies. Until Lifetime addresses the blatant racism on the show and takes steps to be more racially cognitive, they’ll be at the bottom of the pyramid, or maybe at the bottom of the view charts.

At the time of publication, Lifetime has not responded to a request for comment.