Quarantine: the inner child strikes back 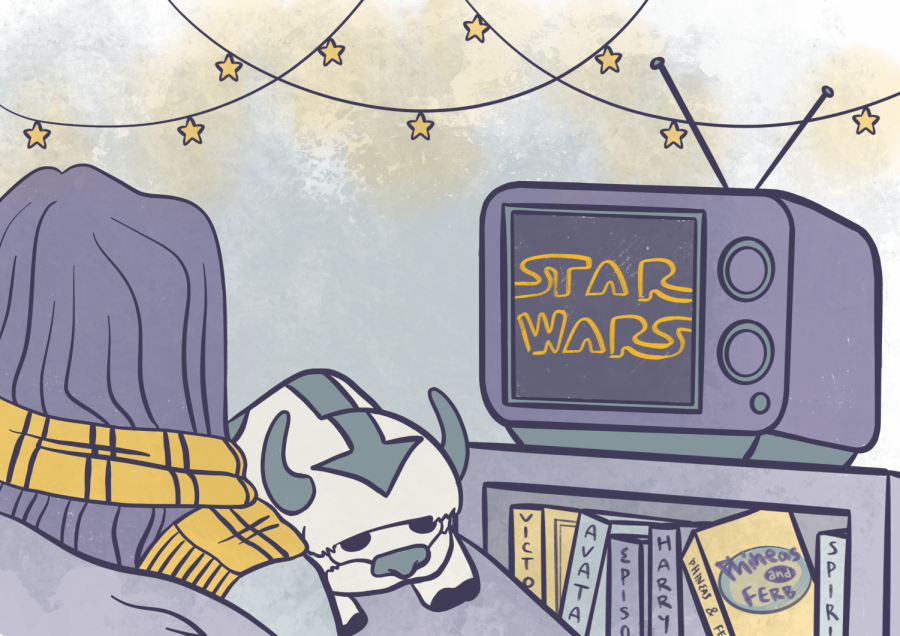 Senior Writer Kaavya Butaney writes about how quarantine has given rise to a resurgence of childhood interests — something born of a desire for normalcy.

There’s a trend beginning to emerge from the chaos — I’ve seen it in action with a million different Instagram accounts and YouTube videos: Quarantine is bringing out everyone’s inner child, from a re-discovered obsession with stuffed animals or a rewatch of “Star Wars.”

There’s a compelling reason behind it: There is something incredibly satisfying about revisiting childhood media. It’s comforting to reminisce about something happy, something that will always end well. Quarantine is unpredictable and messy, and that’s something that we don’t often see in kids’ stuff. Good always prevails in the end, no matter how many turns the movie takes.

This resurgence didn’t just start in March, with the beginning of quarantine. For many people I know, the first part of the rebirth started last year when the Nickelodeon show “Victorious” came onto Netflix. Despite not watching it when I was younger, I soon succumbed to the charms of a 2000s childhood experience, incredibly unrealistic as it was. It wasn’t so much a resurgence for me as a comforting glance at someone else’s pre-teen years. For many others, this revival was a look back at what we used to watch and thereby, who we used to be. Just like looking at old photographs, watching childhood movies or shows can transport us to our younger selves, when things were all just a bit more simple.

Which brings me to part two of this rebirth, which is quarantine itself. When quarantine started, many of us were pumped. We were going to be productive, drink massive amounts of whipped coffee, write novels and bake bread. But everything changed (when the Fire Nation attacked) when the pandemic stretched on.

So we turn to what can be expected. Curled in front of our screens, we find solace in knowing that while COVID-19 may be truly confounding U.S. government officials, Luke will defeat the Empire.

Many have had different renaissances, from “Avatar: the Last Airbender” to “Phineas and Ferb.” For me, my beloved “Star Wars” had a massive comeback. Before this year, I could recite to you every plot point in all three trilogies and spin-off films, but my obsession has only intensified. Right now, I could probably mumble the “Revenge of the Sith” screenplay in my sleep because of how many times I’ve watched it. In the process of rewatching “Star Wars,” I’ve realized something: The things from our childhood take on new, more complicated meanings the older we get.

There are subtle and overt political messages everywhere in our childhood media, and “Star Wars” is no exception. When we’re younger, we take things at face value. There are no metaphors: The Gungans are just Gungans, the Jedi are just Jedi.

I’ll admit that “Star Wars” isn’t perfect and often broadcasts messages that I despise.  For example, when my brother and I rewatched part of “The Phantom Menace,” he pointed out that the Trade Federation blocking Naboo is supposed to be a metaphor about how Chinese companies are blockading the Western world, trying to spread their communist agenda. It was something that made so much sense but had never occurred to me before.

Movies have a lot going on behind the scenes; after all, art is often made to represent more than it displays on a screen. But that isn’t always a negative thing, because political messages can convey nuance and critical importance.

My personal favorite comes from the cringiest of the Skywalker saga, a movie that is both hated and loved: “Attack of the Clones,” the second installment of the prequel trilogy. Iconic for the lines, “I don’t like sand. It’s coarse and rough and gets everywhere,” and “I’m haunted by the kiss you never should have given me,” the movie gets a bad rep for its awkwardness and Anakin Skywalker’s 19-year-old angst.

But the movie itself brings up some of the best points in “Star Wars,” including the Republic’s blatant corruption and the Jedis’ failure to acknowledge their faults. As we get older, watching the prequels becomes watching a failing government turn into an authoritarian regime. At the beginning of the first movie, this moral system seemed so clear-cut: There were “good guys” and “bad guys,” and they are good or bad, no in between. However, as the trilogy continues, the line between the “light side” and the “dark side” is harder and harder to pick out. The trilogy progresses in a way that reminds me of how we see the world around us. In the first movie/as kids, we see things super clearly, despite how complicated they actually are. But as the trilogy goes on and we get older, we see things as they are: confusing and just gray.

Even in the convoluted three-trilogy narrative of “Star Wars,” the saga doesn’t stray from the motifs of many other kids’s movies: The “good guys” always win in the end, even when things seem bleak and hopeless. Through the saga, we see democracy become corrupt and fall, but in the end, evil is always defeated and good always rises.

By rewatching old movies, we can revisit those old beliefs because we want so badly to believe in good again, to believe that if we try our best to do what is right, that it will pay off. But that doesn’t happen. There don’t really seem to be fairytale endings where everything is tied up with a neat bow and the princess and the prince are married (in like three days). The princess probably decides that talking to the prince is too awkward and ignores him, goes to college and decides on a not-prince that works just fine. So when things seem so uncertain, when life feels rocky and we can’t leave the house without wearing a mask, that safety is what we crave more than anything. And honestly? I think it’s just nice. Sometimes we need a safety blanket.

So cue the curtains, close the affair; let’s pretend that good will prevail today. Now, I’m going to go watch “Revenge of the Sith” just one more time.