Q&A: Life as a Mexican Immigrant 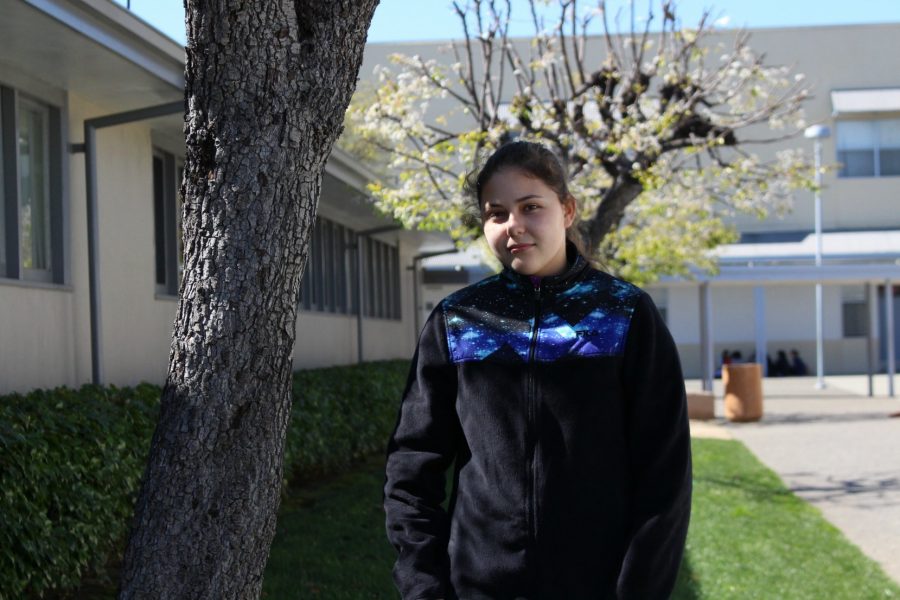 The only Mexican in AP Language and Composition seventh period, junior Esmeralda Nunez finds it difficult to participate in class.

“I don’t do my best,” Esmeralda said. “I don’t participate even though I know the answer because I always ask, ‘What if I’m wrong?’ Most of those students… are really smart. So I just try to be like everyone else, even if I’m different.”

As a Mexican moving through AP courses, Esmeralda feels constrained by stereotypes. Students around her, she says, hold prejudices that keep them from understanding her situation outside of school, where she works multiple jobs.

“If you’re a Mexican, students think, ‘Oh yeah, you’re a Mexican, obviously you don’t do the work,’ but they don’t know what’s going on at home,” Esmeralda said. “During school days, I work at five in the morning with my parents to help them out. Sometimes I work at night really late. So if I don’t do my homework, it’s not like I don’t care. There’s just not the time.”

When Esmeralda was five, her parents divorced, and her mother moved to the United States to escape her alcoholic father.

“[My father] asked my mom for money in exchange for my custody,” Esmeralda said. “He was a drug dealer, he was alcoholic, and he would always beat up me and my brother. She was tired of it.”

Eventually, her mother came back for her and her brother. When Esmeralda arrived in America in third grade, she stayed with her aunts. She wouldn’t see her mother, who was helping her brother immigrate, for another six months.

Today, Esmeralda lives with her mother. She has little connection with her father, who still lives in Mexico, and she hasn’t traveled back. It’s stories like hers, Esmeralda says, that students often never try to understand.

“Students [need] to just give us a chance,” Esmeralda said. “Every Mexican has their story. It’s always a struggle to come to America.”

With a political climate increasingly hostile toward immigrants and minorities, understanding stories can be crucial. In the following interview excerpts, edited for clarity, The Talon talks to Esmeralda about her experiences in an attempt to understand what it means to be a Mexican immigrant.

What was it like when you arrived in America?

It was really hard to catch up. I didn’t speak English, so assimilating was pretty hard in elementary school. Everyone was just making fun of me because I didn’t do this, or I didn’t know how to do that.

I always tried to dress like them, even though I had my own culture. If I wore my Mexican shirt, and everyone started calling me names, then I wouldn’t do it again. Just to act like they do.

Is there pressure to be more American? Does that conflict with Mexican culture?

I think so. Everyone always favors the higher income class, and all the white kids are always the teacher’s favorites, so you want to be like them. You want to get the straight A’s like they do, be successful in AP classes like they do.

Most of the things I do at home, I wouldn’t do at school. Like for Spanish, we had to make tortillas. All the Mexicans knew how to do it, they just pretended that they didn’t. They didn’t even pronounce things right. I was saying, “You’re Mexican, what are you doing?”

So you lose yourself, trying to be like them. Even your parents, once they come here, it’s all work, work, work. They don’t have the time to talk to you about your culture and do the traditions you’re used to doing at home.

Have you ever been hurt by stereotypes or racism?

How do some people feel pushed back by the stereotypes?

Everyone is always telling us that Mexicans are going to fail, they’re not going to go to college, they’re going to end up pregnant and stuff like that.

Not everyone can go through it. Every Mexican has a unique story. Like when I came here, I was bullied in school because I didn’t speak English. It’s just so hard. We hear all these things pushing us back, and we get tired. And some say, “Whatever. They say I’m going to fail, I’m going to fail.” And then they just give up.

Would you be willing to talk about your experiences with depression a little?

Toward the end of freshman year, my best friend was killed in a car accident. That really got to me. My grades just started going down. I was just freaking out. I was failing at school, I had just lost my friend. I was way too overwhelmed. Sophomore year, I tried to commit suicide, and I was so close to doing so.

I know a lot of my friends who are like this, and they’re all Mexican. Some get through it, but not everyone. A lot of them have to deal with it by themselves, and they do self-harm and stuff. They don’t ask for help, and they don’t feel comfortable asking for help. Mexicans have that stereotype where it’s like, “You have to be tough, you have to be a man.” So even my guy friends who have cut before, they’ll talk about it, but they’ll say, “No, don’t tell anyone.”

Do you think there are ways to help students facing this?

I think the way they do therapy, like the way they sent me to therapy here and said, “Sit down, talk about your problems. Okay now go get out to class,” is not a way to help people. People need to constantly be talking to someone, not to just sit behind a desk and have someone in front of you. They need a walk, or just someone to hear you out but not be telling you, “Oh yeah, don’t do this, don’t kill yourself.” That’s not going to stop you from doing it. You just need a positive person to be there.

Do you think LAHS does a good job helping low income or immigrant students?

I don’t think they really do much to help us. Other than the AVID program I’m in, they don’t have much special help. They know kids are failing, but all they have is the tutorial center. And the kids there don’t even want to tutor, and a lot of my friends have gone to get help, but they’re so rude about it that my friends don’t even want to go anymore. So it’s not like there’s any center that we can go to to get help, or any certain group for help.

Is there a divide between native-born Mexicans and Mexican Americans?

It makes a division to some point. In Mexican homes, you strictly speak Spanish, and you cook the typical Mexican food. But some of my friends were born here, and they talk to their parents in English, and they don’t have the traditions we have. You see them differently, the same way you see Americans, like “Oh yeah, they’re not real Mexicans.”

Although we do talk to them and stuff, we don’t feel that comfort, they don’t understand because they haven’t gone through the same struggles. They don’t really know as much of the culture, and some of them don’t speak Spanish. With the whole Trump thing, they were like, “Oh no, we’re not immigrants. Our parents are, but we’re not.” And I was like, “You guys come from immigrant families, you basically are.”

What helps you get through the different struggles you face?

I move forward by finding something I was passionate about. Last year I started playing soccer. Then after soccer was over, because I realized sports were my thing to go forward and get things off my head, I did preseason conditioning for football. Then this year I played football. And then I’m going to do conditioning again to play football next year. It’s just finding what’s going to help you get through it.

Some people just need to draw, or write. I write a lot. When I just completely can’t handle it, I just write how I feel. If I’m mad at someone, I’ll write them a letter and keep it to myself. Just to let it out.

I have to keep going, because I’m a first-generation student, and I can’t give up on my parents. They’re the main reason I do it, because they paid all that money to bring me here. I have to pay them back.