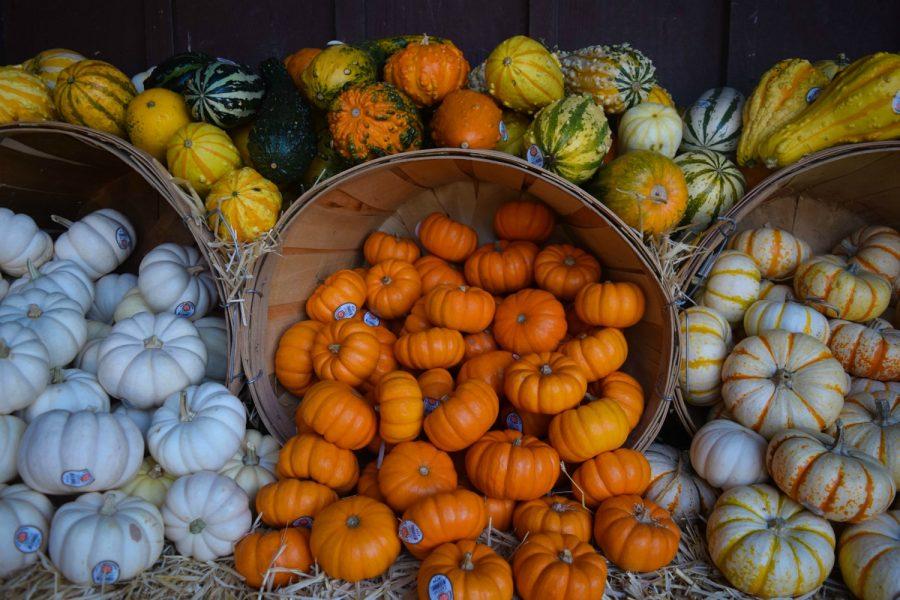 There are a couple ways to tell if it’s truly fall. You could take the old-fashioned approach and go outside for a walk and feel the crunch of leaves beneath your feet and the cool breeze on your skin, or you could choose the modern route and go to a store and see endless shelves packed full of orange packaged pumpkin spice infused goods. However, It’s easy to overlook that this classic spice blend hasn’t always existed. Pumpkin spice may have unclear beginnings, but its quick rise to popularity can be attributed to clever marketing strategies by big companies like Starbucks.

America is crazed for pumpkin spice. In fact, a third of all Americans will say “pumpkin spice latte” in response to the word “fall” before they even consider “fall foliage” or “sweaters.” Last year the total sales of pumpkin products in the United States was $500 million.

Although many people ravenously consume pumpkin spice beverages and foods during fall, many don’t know what ingredients make up this flavoring. Not consisting of any actual pumpkin, pumpkin spice is a spice blend that is comprised of cinnamon, nutmeg, ginger, cloves, and allspice — the traditional spices used to flavor pumpkin dishes.

One of the earliest references to pumpkin spice was in a recipe for “Pumpkin Spice Cakes” by the Washington Post in 1936. In the 1950s, McCormick started selling a mixture of spices that would commonly be used in pumpkin pie, called “Pumpkin Pie Spice.” The convenience of the pre-blended spice sparked its popularity. In the 1990s, businesses, including bakeries and coffee shops, started infusing pumpkin spice into their products.

So why all the hype? Why is pumpkin spice so integral for some for a proper fall? Popularity of pumpkin spice is attributed to its limited-time availability which drives consumers to purchase the special product before it leaves the shelves. Limited-time offers create urgency, circulate talk and facilitate interest about the product.

“Limited-time offers help the goal of always having news — it keeps a brand in the forefront of the consumers’ minds,” Mary Chapman, director of product innovation at research firm Technomic, said in an interview with Advertising Age.

The Bandwagon Effect is prevalent during seasonal sales. This is the psychological tendency to copy and follow what others do. Thus, the more hype and more attention put on pumpkin spice products, more people will purchase the limited products and more people will follow those consumers.

Seasonal offers also create a higher average order size. According to an NPD Group study on seasonal beverages, the average check of a pumpkin spice latte buyer was $7.81 whereas a non-seasonal drink buyer spent $6.67. This occurs because seasonal items are thought of as “indulgent purchases” and people like going all in when treating themselves, resulting in extra purchases.

Another key component of the success of pumpkin spice is the use of marketing campaigns, especially on social media. Standing out in a sea of pumpkin spice is definitely a challenge, but Starbucks manages to connect with their target audience through trendy marketing strategies. Giving the Pumpkin Spice Latte (@TheRealPSL) its own verified Twitter, Instagram, and Tumblr account, Starbucks has managed to expand its brand awareness and has allowed customers to creatively interact with its product. The pumpkin spice latte also has a dedicated Facebook page where consumers can share their experiences about their drink.

“The Starbucks social team established traits to support PSL’s spirited persona and decided to treat it as a celebrity after noticing people who follow PSL on social media also follow more celebrities than the average user,” a Starbucks spokesperson said to New York Daily News.

The pumpkin spice frenzy doesn’t appear to be going away anytime soon. With constant innovative marketing techniques and new products being sold each year, pumpkin spice fever will continue to rage on.