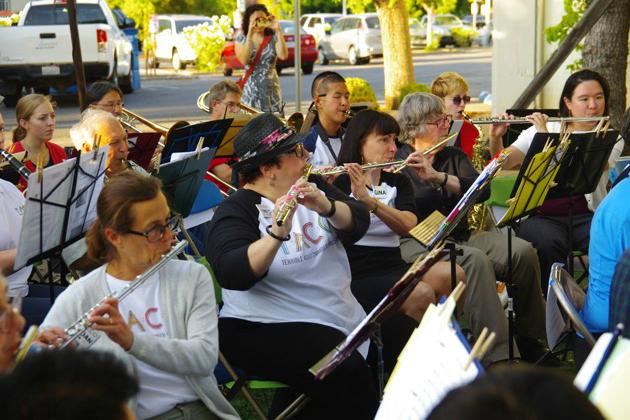 Los Altos downtown’s pop-up park Third Street Green, open between August 4 and last Monday, serving as an accessible green area for many Los Altos residents to relax outside. The annual park first opened 2013, and was closed last year due to construction.

The Green offered up a whimsical park theme, with bright green turf and multicolored umbrellas. Toys and games were laid out every day, with options such as a ping pong table, foam blocks and magnetic toys. It was walled by Vietnamese restaurant Tour Eiffel and Fina Lifestyle Boutique, whose employees commented on the success of the Green.

“I like [Third Street Green because] it gives a spot for parents and nannies to bring their kids and just sit and hang out,” a Fina Lifestyle Boutique employee said. “It’s brought a lot of community members together in that one spot.”

The pop-up park garnered residents’ attention, with some of them adding it to their daily routine.

“It’s become a part of our [family’s] day,” a Los Altos resident said. “The kids love it, so we come as much as we can.”

The weekly Farmer’s Market went hand-in-hand with Third Street Green — the Green offers a resting place for shoppers, and the Farmer’s Market offers the families choices for a bite to eat.

“Where the synergy comes with [Farmer’s Market and Third Street Green] is that you can buy all your stuff there, and you actually have a place to sit and eat,” Los Altos Economic Development Manager Jennifer Quinn said. “We made sure we kept Third Street Green in a way that would support [the Farmer’s Market], not create a distraction.”

The success of the park led many patrons to wish that it continued on past August.

“It would be nice if the park could last longer,” a Los Altos resident said.

Quinn understands the desire for a permanent park area downtown, but keeping the Green on Third Street blocks traffic.

“We hear the appetite that people have for a recreational space,” Quinn said. “The thing with Third Street Green is, is that’s a street. We can’t really alter our traffic patterns for a permanent thing like that.”

Next year, Quinn plans to increase community input when the park is put up again.

“The passive space that we’ve had is really great,” Quinn said. “We’re going to take this and run with it, and let the community have more of a say in it next year.”

The Green first opened as State Street Green, when State Street was under construction in 2013. As Foot traffic decreased across downtown as many businesses temporarily closed, the city introduced the green to boost downtown’s attraction and create a community green space in the closed street.

“[Third Street Green] was making lemonade out of lemons,” member of Los Altos’ Steering Committee Robin Abrams said. “We closed [the street] off and made a bit of a park so it would attract people.”

After the success of the park in 2013, it was reopened in 2014, increasing its popularity. Construction on Third Street prevented it from reopening in 2015. With the success of this year, the park is set to continue returning in the following years.