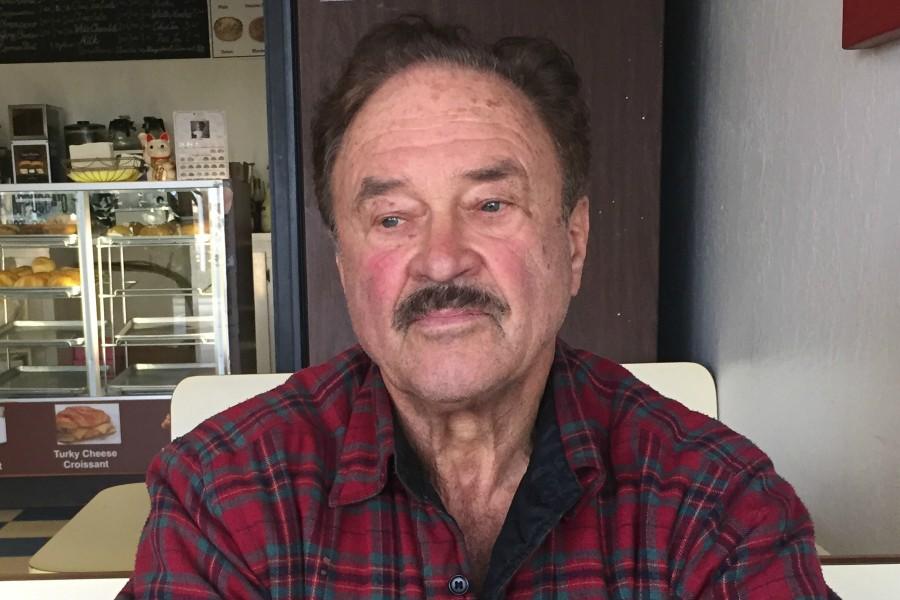 Don Letcher poses for a photo. Photo by Eli Colbert.

“Rengstorff was just a dirt road when I was a kid,” Don Letcher said. “It was orchards, mostly. Next door to me, where the bar is, was a pig farm, and in back of us were almond orchards almost all the way up to Central Expressway.”

Letcher’s notorious relationship with the City of Mountain View can be blueprinted by zoning law, traced through generations of local law enforcement, through succeeding mayors, and can be observed in his absurdly vacant lot. A retired Sunnyvale firefighter, Letcher bought his Mountain View property from an aunt and uncle 50 years ago. 688 N Rengstorff Avenue consists of six housing units and 12 buildings all together, on 0.86 acres of land. The sunlit complex seems ripe for communal living. Houses line the perimeter, leaving a pocket of asphalt where one can imagine barbecues and children’s chalk drawings.

Letcher’s inaugural run-in with the city was volcanic, considering that it sprung from the legal nuance of a code inspection. Municipal officials approached Letcher about inspecting his tenants’ homes. Letcher, familiar with some civil law, objected to the inspections on the basis that they were only compulsory for units housing three or more tenants, not Letcher’s single-family homes and duplexes. Taking Letcher’s advice, his tenants stayed home on the day their homes were to be inspected. After inspectors were rebuffed, the police department was called.

“The SWAT team showed up,” Letcher said. “About seven officers came down and I went to the back of the property first and just watched. And my god, some of my tenants came out of their houses with their hands on their heads. [The police] told them that they had no choice but to come out of their houses and let them be searched, without a warrant. They huddled them in a circle in the middle of the property, and went in and did the place.”

Letcher’s clash with the city crescendoed in 1996, following the rezoning of Old Middlefield Way. The lots facing Old Middlefield were redesignated as commercial service.

Letcher’s strong suspicion, gathered from word-of-mouth, is that the city needed a central area to situate gas stations, auto repair shops and smog stations, whereas they would be an eyesore if spread across the city. Letcher’s gripe, which would snowball into petitions and phone calls of protest, was that his property didn’t face Old Middlefield, but Rengstorff. He felt that his own conflict was a reflection of the city’s deteriorating direction. Armed with a paint can, he made his dissent as public as possible.

Also painted on Letcher’s house, above his front door, were the messages, “Affordable Housing Is An Issue,” “Stop Abusive Code Inspections” and the names of Mountain View mayors who Letcher felt supported gentrification. Letcher’s property is empty today, except for him, and has been for 17 years. Letcher’s protests have been painted over.

“Oh well, I’m just getting to old,” Letcher said. “I put it up myself, I painted it myself. I’m 78 years old; do you really think I should be climbing a ladder up there? Twenty-eight years with the fire department, I put up ladders. I hate to say it, but I can’t put up that 35-foot ladder by myself anymore. I had a regular painter I used, and I hired him to come down. But even he’s 65 years old now.”