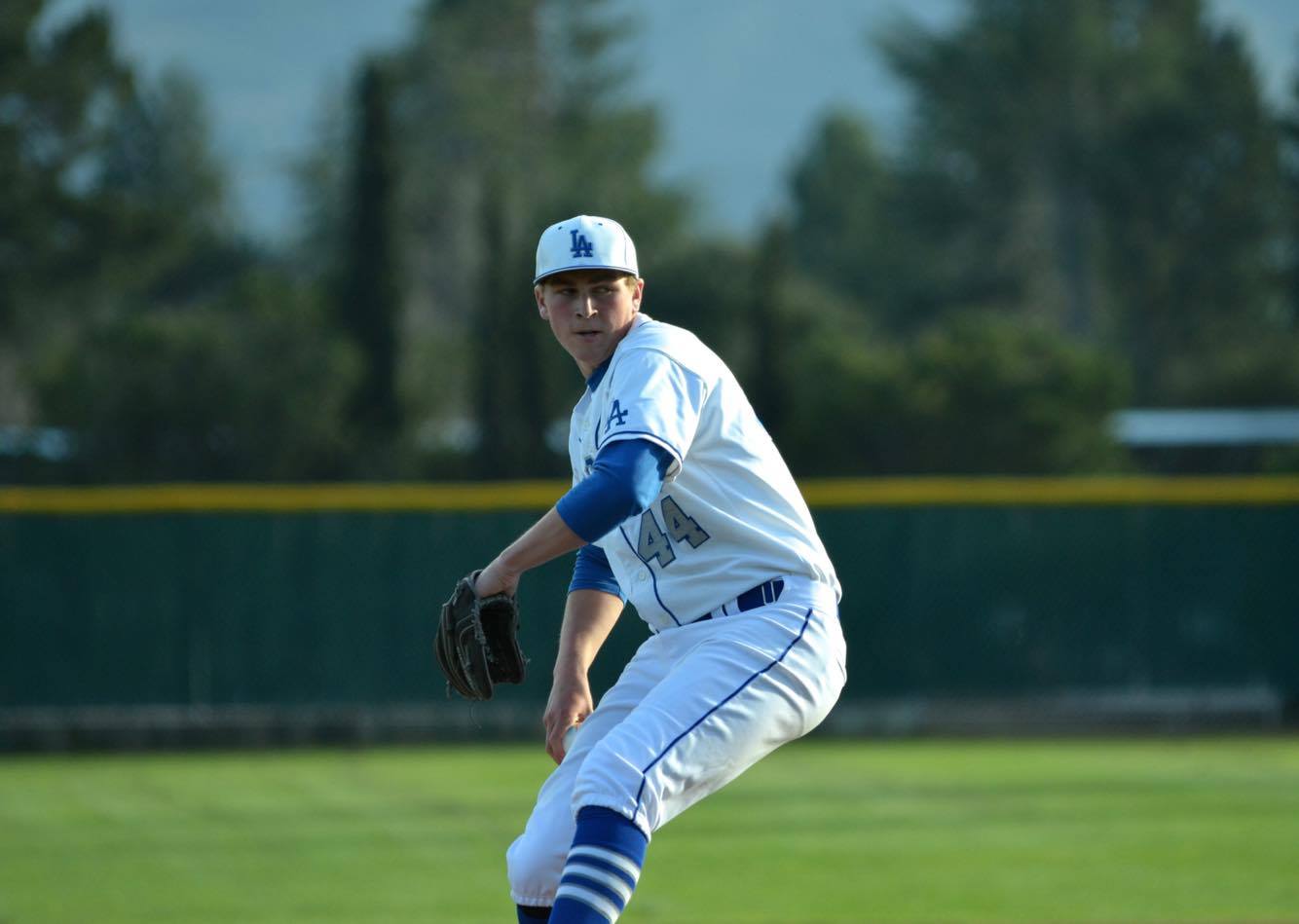 Junior Alex Reelfs listens to the same song on repeat before every game. Headphones on and tossing a baseball in his right hand, Alex blasts “The Zephyr Song” by the Red Hot Chili Peppers until it’s stuck in his head. Why? To pitch to the tempo during the game. Alex started this pregame ritual his freshman year, and now halfway through his junior year season, he has already pitched two no-hitters — the only two in the league this year.

“I have always been competitive since I was young,” Alex said. “I believed that if you aren’t trying to be the best then why try. This also involves never settling which is why after my first no hitter in the first game of the year, I came back and threw another one on Saturday. It is just all about getting better.”

Standing at 6 feet 5 inches tall and 220 pounds, Alex is a lethal pitcher and first-baseman playing his third year of varsity high school baseball. His love for baseball all started when he first picked up a bat at the age of 6.

“My mom tried to get me into t-ball which is the first level, but it never really caught my attention because it was too easy for me,” Alex said. “And then once I got into little league, before and after practice I would always stay for hours at the field.”

Alex’s drive to improve his game started young, but he didn’t keep up with the MLB nor did he idolize anyone from the baseball community — it was his competitive nature due to always competing with older brother that pushed him to become better.

“I played in the front yard with my brother where one person is batting and one is pitching and I would always lose because he is two years older than me,” Alex said. “That made me even more competitive because my goal was to beat him and I had to get better.”

While Alex grew up with extra pressure from having an older brother, it was Alex’s father, the coach of his little league team, who gave him the time and resources that other young baseball players did not have at their disposal.

“My dad was my little league coach so that allowed me to get to the field 30 minutes early and leave an hour or two after practice,” Alex said. “That enabled me to be better. I have always been competitive and since I was young I believed that if you aren’t trying to be the best then why try.”

Nearing the end of regular season play, Alex is at the height of his varsity high school baseball career, switching between first baseman and pitcher every game. Alex is currently leading SCVAL in home runs (2) and has pitched the most strikeouts in the league (46). He pitched two no-hitters this season, one in the opener in a 4-0 win over Gunn, and another just recently in a 6-0 win over Branham. Alex throws an 89 mile-per-hour fastball, an impressive feat for a high schooler.

“There is some pressure but at the same time when it comes to game time I trust my training and believe that if I just go and throw like I know I can, my stats will back up my abilities,” Alex said.

In addition to his talent when it comes to playing the game, Alex has proven himself to be team player — he was picked to be a team captain alongside senior Max Higareda. He helps keep the team motivated and focused during practices, even during the toughest times. Alex hopes to guide the Los Altos varsity baseball team to CCS this year. The team has a strong lineup and are currently 5-5-1 in SCVAL.

Junior year is one of the toughest years for student-athletes planning to play in college. While the majority of the high school athletes are playing for fun, there are always a select few students looking to extend their athletic careers past high school — Alex is one of these athletes. Although there is more at stake for him personally when it comes to impressing college coaches with statistics and game IQ, Alex is truly grateful for his teammates.

“Even if my teammates aren’t trying to play in college, that doesn’t mean they don’t want to win,” Alex said. “It’s nice because usually that would not be the case. We have a second baseman who wants to be a doctor but still comes out and competes and does really good. It’s a team sport and on our team everyone contributes.”

Alex is currently in the middle of the recruiting process, talking with coaches from schools including the University of Utah and Columbia University. He also has a scholarship offer from Sacramento State.

“I mean the recruiting process is tough because if you reach out to a coach the likelihood is that they haven’t seen you play so it’s a tryout and you only get one chance really,” Alex said. “It’s feels good but at the same time it’s a lot of pressure because they want me to commit but I don’t know if I’m ready for that. I want to explore more colleges.”