Performing his piece with great Fine(nesse) 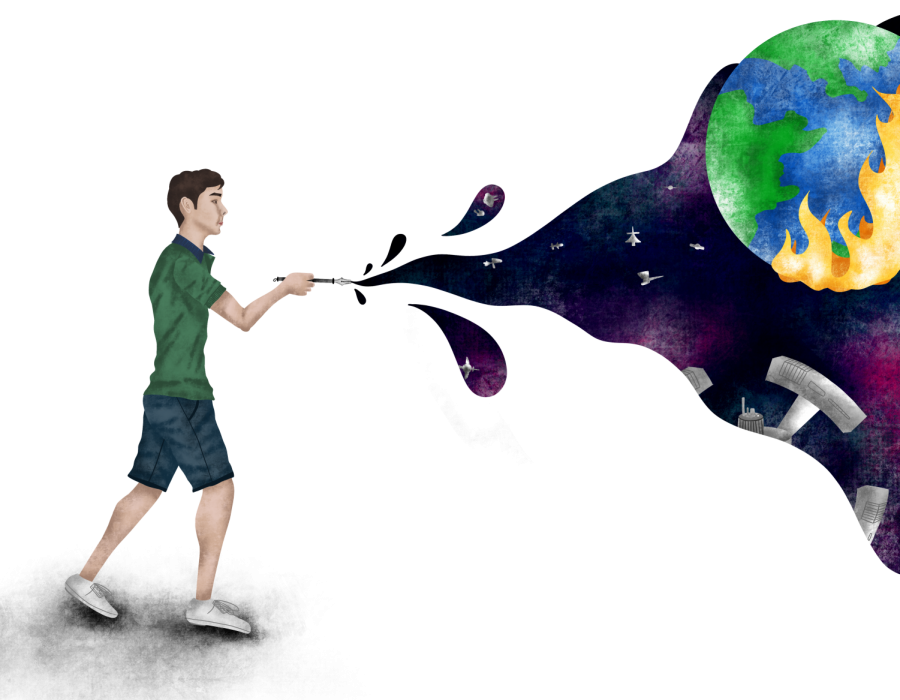 Junior Evan Fine is a fine man with many fine talents: he is known as the finest “speech god,” a fine mock attorney, a fine history nut, a fine violinist and a fine writer—talents that he channels into a love for creation, whether it be playing the violin or writing stories.

By Kaavya Butaney and Cedric Chan

Junior Evan Fine is a fine man with many fine talents: he is known as the finest “speech god,” a fine mock attorney, a fine history nut, a fine violinist and a fine writer—talents that he channels into a love for creation, whether it be playing the violin or writing stories.

He began playing the violin at age three after hearing Joshua Bell perform the Mendelssohn Violin Concerto and allegedly told his mom, “Ma. I want.”

Now, at age 15, Evan is highly committed to the violin and has spent countless hours practicing.

“If it’s the same piece I’ve been playing for over four months and I have to play the same thing again and again until I fix every note, I hate it,” Evan said. “What I do like is getting new pieces and feeling the nuance of the music.”

But beyond just playing, he’s also composed various pieces of music and worked with the Los Altos orchestra to play them.

“The sensation of creating something and watching it become a coherent piece—it works the same in music and writing,” Evan said. “It’s the same underlying principle.”

It all comes down to the way creativity makes ideas into something real.

“The je ne sais quoi factor,” Evan calls it. It’s this intangible quality that drew him to creative writing in the first place—watching the meaning behind the words come together.

Evan loves to write drunk stories, where authors simply write in a state of drunken stupor. He doesn’t get drunk; instead, he just writes whatever comes to mind, no matter how crazy or confusing. Through this and similar approaches, he cultivated a group of stories and poetry.

Gradually, Evan’s collection of short stories and poems grew and took form to become the basis of the novel he is now writing called “Future’s Advent.” The easygoing approach Evan took to start his novel consisted of using voice memos to record his ideas, which, being unpredictable, would come and go at any given time. Evan always had his phone at hand, ready to record his ideas, and over time, they became a cohesive story.

As many aspiring writers would confirm, writing a novel is hard: It takes hours upon hours of work and planning, as well as a laser-like focus on a single topic.

When asked to give advice to readers, Evan mentioned a quote that he appreciates from his English teacher Michael Moul: “Look beyond the words, go into the nuances of the story.”

Although it requires significantly more effort than short stories, Evan does love writing “Future’s Advent,” which is a post-apocalyptic science fiction novel. His inspiration for writing came at the exact same time his love of the violin did: When he was three years old, he watched and fell in love with the sci-fi movie The Forbidden Planet.

“Chronophobia, they call it—the fear of time—because you don’t know what is going to happen,” Evan said. “It’s that kind of fear that made me look into science fiction. It can talk about a good future or a bad future. And it’s that sort of uncertainty that makes it interesting.”

The United Coalition is military-focused, without concern for its people, and it is terrified by attacks by the so-called ESPERs, an alien force they know nothing about, occurring every 20 years. 2663 will be the 20th attack. The Iron Stars is a meritocracy where people augment themselves by replacing body parts with robotic counterparts.

In a blend of his creative talents, Evan is working on composing a motif for each character in the novel.

“Jason’s motif starts like a very ceremonial thing, what you would expect of the president, and then it becomes a more human theme,” Evan described, humming the tune. “That’s what his character arc is, really.”

These distinct elements—writing and music—are unified by Evan’s passion for creation.

“I’m hoping to publish my music with the book,” Evan said. “Something I like is both writing and music, so I figured, why not do it together? Copyright the book, copyright the music, stick them together. Voilà.”

This book has taken more than a year of planning, and Evan hopes to publish it before the end of high school. Motivated by his passion for creation, Evan hopes to have a sequel called “Afterglow.” So, as Evan once said, “Buy my stuff.” Or as we said, “Buy Fine stuff.”