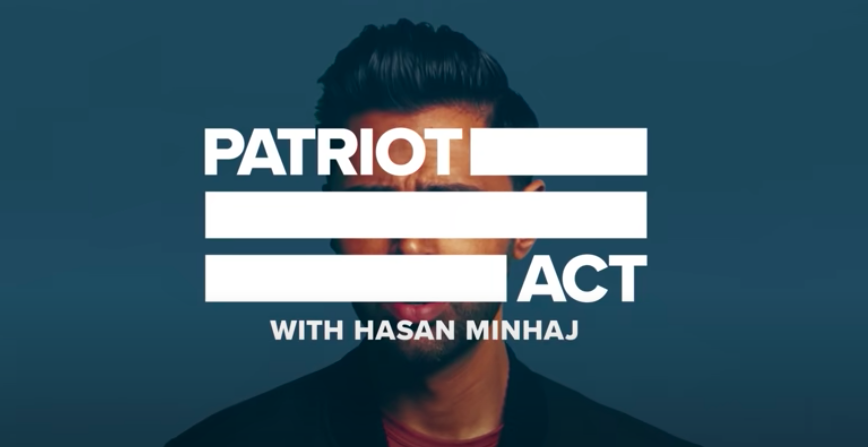 You might think it’s just a little sad of me to say my favorite show in 2019 was “Patriot Act with Hasan Minhaj,” but it was. It was a grand old time, watching it religiously every Sunday on Netflix with my brother over bowls of leftovers from the previous three days, trying to absorb as much of its densely-packed 25 minutes as I could.

But as of Tuesday, August 18, “Patriot Act” was canceled. So as you can predict, I am incredibly bitter and just a little in denial.

“Patriot Act” was an amazing show. In half the time it takes me to do my math notes, Minhaj introduced things like the National Rifle Association’s global impact and how it actually works, with spicy comedy and terrible clips of political figures, often discussing important issues that are overlooked or just ignored, like the Sudan crisis. Plus, I’m not alone in my love of the show: “Patriot Act” gathered millions of views on YouTube, creating a wide and diverse fanbase, full of political wokeness and biryani jokes.

Netflix’s declaration to kill this masterpiece came out of nowhere, and at first, I was half-convinced it was a joke. But as word spread across my Instagram feed (the only source of news I trust), I was forced to come to terms with the fact that it was terribly real. So, farewell, “Patriot Act.” It’s been great.

I lamented the loss of the show for many reasons, an important one being that “Patriot Act” is excellent journalism. The information it presents is reliable, sources are referenced and, what many news reporters fail to achieve, the show is engaging. Minhaj simultaneously discusses the work of local newspapers in outing Epstein and self-roasts his over-gelled hair.

But what truly made me enjoy the show is the perspective it gave. “Patriot Act” is not white. It is not geared toward white people. In fact, “Patriot Act” is unabashedly South Asian, a welcome break from the range of news coverage and talk show hosts, who vary from cream to eggshell. But beyond that, Minhaj doesn’t focus on telling stories about white people. In fact, the majority of the time, he covers stories that affect people of color, stories that aren’t being covered in the way that they deserve to be.

“Patriot Act” worked hard to make people of color feel included in a way that doesn’t often happen in the news. Hasan Minhaj isn’t your neutral mediator or even your semi-biased laughing host; he’s a person who’s as frustrated as you are.

Nowhere does that come into play more than Minhaj’s 11-minute video about the George Floyd protests and how they fit into Asian American culture. And he is not making excuses. He is calling out the Asian American community for its own hypocrisy — for being complicit in anti-Black racism and pretending it doesn’t exist, trying to fight for itself without fighting for others and actively discriminating against those with darker skin. That’s why losing “Patriot Act” right now is a disaster. In the time where we need quality political dialogue the most, less than three months from the 2020 election, we just lost an informative, funny and bitingly honest talk show.

But not even my beloved “Patriot Act” is perfect or even close to it. This year, there were comments about a toxic work environment and a place that didn’t give women of color a place to speak out. It was also said the show, as incredibly well done as it was, was built on the labor of mistreated and hurt people. These issues matter, I will not deny that and this is indicative of a massive problem within the show itself. Yet while these complaints matter, I hold hope that “Patriot Act” could improve itself and practice what it preaches in terms of treating workers properly. Yet reportedly, “Patriot Act” was willing to do that change and were planning to enact it in the next cycle, which never came. I don’t know if it was just an empty promise, but we’ll never know.

Look, I know that “Patriot Act” is gone, probably forever. The legacy it leaves behind is more complicated than I realized. At the beginning, I saw “Patriot Act” as a beacon of light, a statue of good political comedy and while it is, it was built on broken backs and pain. “Patriot Act” was a flash in brown in a blizzard of journalism, something new to be seen and a platform for incredibly well-written political commentary. So, yes, “Patriot Act” is a loss to be mourned but it is also a lesson to be learned: nothing is immune to bigotry.

Despite this controversy, I’ll miss the show. It taught me and so many others a great deal about undercovered problems and opened me up to the world of political comedy. So while there are no more “Hello, I’m Hasan Minhaj, welcome to ‘Patriot Act’”s in my future, I can still remember the show for what it was: an informative, wildly entertaining TED talk with fourteen screens.