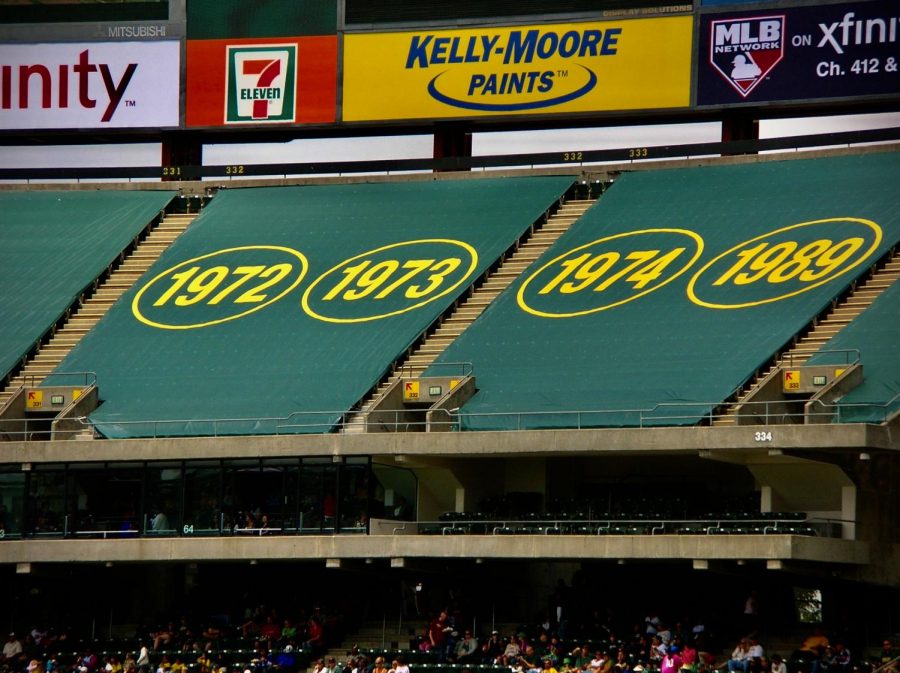 The Oakland Athletics have made the playoffs in a non-wildcard position for the first time since 2013. While many fans are hopeful that this is the start of something bigger, all the signs point to the team not performing in the playoffs.

By Garv Virginkar and Barrett Wong

A’s fan’s report, October 10th, 2020: “Seven years. Seven long years. That’s how long it took for the Oakland A’s to make the playoffs. At first, it was going well. Then setback after setback, Wild Card loss after Wild Card loss – made what was going to be an underdog playoff upset into seven years of hell.”

Old video game references aside, the Oakland Athletics (A’s) are officially the American League West champions for the first time since 2013 after the Houston Astros were defeated 6-1 by the Seattle Mariners on Monday, September 21. The team made the Wild Card elimination game last year and the year before, but was blown out both times.

After a slow 3–4 start, the team has gone 21–16 since August 8 and has carried that momentum throughout the season, ending with a 33–20 record.

And while that looks great on the surface, the A’s probably won’t make it past the first round of the playoffs. In all honesty, the A’s are not a very good baseball team for a number of reasons — the most notable being star Third Baseman Matt Chapman’s season-ending hip surgery on September 12th.

Chapman was by far the most valuable player on the A’s, both offensively and defensively. He posted a 0.232 batting average, 0.276 on-base percentage and a 0.535 slugging percentage, with a team-leading 10 home runs and 25 runs batted in. On the defensive end, his total of 82 defensive runs since 2017 leads the entire league. Both his offensive and defensive numbers are incredible and are often the highest on the team, if not in MLB as a whole.

And while rookie second baseman Vimael Machin and late-season-addition second/third baseman Tommy LaStella have played well in his absence, a key player such as Chapman just can’t be replaced so late in the season.

Even with these newer additions, other longstanding players on the A’s have yet to step up. Designated hitter Khris Davis, one of the league’s best hitters in 2018, has been terrible and has been deservedly scratched from the lineup. Similarly, shortstop Marcus Semien and first baseman Matt Olson have continued to perform defensively, but their offensive numbers are down significantly from their 2019 averages.

Additionally, the A’s have played one of the weakest schedules in the majors. Of their 53 games played, only four were against teams with winning records, and the A’s lost three of them, including last night’s ugly blowout against the Los Angeles Dodgers. Even against teams with losing records, the A’s only have about a 60 percent win rate. You need to win at least 60 percent of your games in the playoffs, and if you can barely do that against terrible teams, you definitely can’t do that against some of the best teams in baseball who will all have winning records. Basically, one of the only reasons that the A’s are at the top of their division is because the rest of their division is terrible.

Another major issue is that the A’s build their team based on the farm system. Instead of signing already established star players, the A’s resort to building up their minor league system in order to find potential top prospects. While this may be a good long-term strategy, it’s proven to not lead to success in the short term, with players such as catcher Sean Murphy taking years to develop. Additionally, since most of the team, especially their star players, are still on their rookie contracts, they have little to no playoff experience, which has harmed them in the past and will continue to hurt them this year.

Despite this, many loyal fans still remain hopeful that their team will finally win after years of mediocrity. In particular, fans like senior Charles Sirey believe the players the A’s have picked up over the years are promising and that the team has the motivation to succeed.

“The A’s are a team with a low payroll, meaning they’ve had to either make good draft picks or smart trades, which they’ve done,” Charles said. “Even after suffering from a disappointing playoff loss last year, the team was able to rally past that and win the division.”

Others, such as sophomore Alexander Daltchev, are satisfied that the A’s simply made the playoffs. He’s hoping for a World Series win, but considers making the playoffs a step in the right direction for the franchise.

“Well I’m really hoping they end up winning the ALCS and go to the world series,” Alexander said. “It’s looking like the Ray’s are gonna take the AL east tonight, so let’s crush Tampa, it’s a win for Oakland for sure. I’m happy as long as the Angels, the Giants, or the Orioles don’t win it all.”

The A’s do have a great regular season record and clinching a playoff spot is a boon for longtime fans, but their record suggests they’re far better than they really are. Although everything up to this point has been speculation, it’s going to be difficult for the A’s to win the world series this year, and fans of the franchise looking for the Commissioner’s Trophy to come back to Oakland will likely be left sorely disappointed.