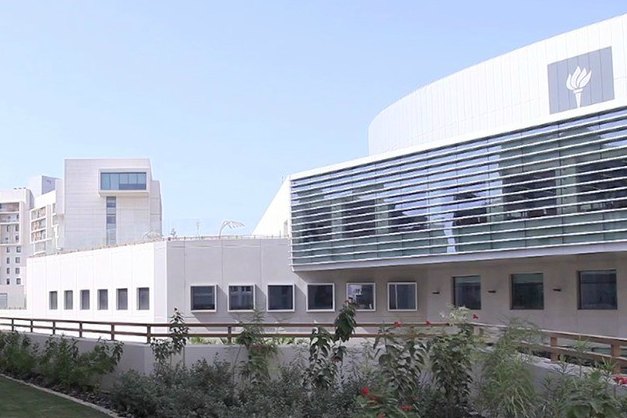 By Anisha Desai and Emma Kwan

Situated in the United Arab Emirates on Saadiyat Island, NYU Abu Dhabi is in the midst of a burgeoning cosmopolitan city as its curriculum and programs emphasize the idea of a globalized culture.

Students who value being around others who share their passion for becoming global leaders should consider NYU Abu Dhabi because of its carefully selected student body.The immersive experience of Abu Dhabi best suits students with aspirations to expand their influence worldwide.

Because of a selective application process, only 4 percent of applicants are admitted. As part of their admissions process, the university does not accept students solely from their application. The initial applicant pool is narrowed down, and the resulting applicants are then flown to the Abu Dhabi campus for a “candidate weekend” where admissions officers take note of how the applicants interact with others. Acceptance offers are extended to students that truly believe in the school’s mission. In 2016, Abu Dhabi offered admission spots to 402 out of 11,000 applicants, with 323 students accepting their offers.

In terms of financial aid, Abu Dhabi is able to completely fund many of their students’ education as they are financed by the Emirate of Abu Dhabi government. Out of their 1,050 students, around 300 students are fully financed, including costs of traveling abroad for semesters in other universities around the globe. Abu Dhabi offers both merit scholarships and need-based grants to prospective applicants.In order to make the application process completely fair, admissions are“need-blind,” meaning that applicants are admitted without prior knowledge to whether they would like financial aid or not.

Abu Dhabi offers both undergraduate and graduate majors in the liberal arts and science areas. Overall, 22 majors are offered along with 27 disciplinary concentrations, or courses that are outside of a student’s major. As well as general courses, Abu Dhabi also requires students to produce a “Capstone Project,” which takes place over their senior year and allows them to produce either research or a creative work based on their area of study.

“They are most interested in having the right kind of student that fits their mission [when considering applicants],” Carter said. “They are not hurting for money at that school… It’s a really delicate balance. You can’t throw kids from all over the world into a school and not have problems unless those students are really open to being in a setting where their beliefs and assumptions are challenged every single day.”

Because of Abu Dhabi’s emphasis on creating a global hub, classes at the college tend to be extremely diverse, with students from all over the world.

“Abu Dhabi is this global, melting pot of kids that NYU seeks out and brings in from all over the world,” Carter said. “[At] NYU Abu Dhabi… only one other student [is] the same nationality as you in the entire class. [The experience] gets you out of your United States centric views on the world because you’re constantly hearing from people from other places.”

One of the key features of the college is that it requires students to travel for two semesters to other colleges, including the original New York campus and NYU Shanghai.

“One of the unique things about studying at NYU Abu Dhabi is that they require you to take coursework outside of Abu Dhabi… but as part of that, you can select to spend up to two semesters in New York or Shanghai or in [another] approved academic environment,” Carter said.

For many students, media portrayal of the Middle East affects their perceptions of the stability and safety in the region. Carter was initially unsure about how Abu Dhabi’s location affected its safety, but he found the area to be much more globalized and urban than many people assume, as well as more stable and safe than media portrayal.

“There’s a lot of… [misinformed] conceptions that people have about the Middle East… and especially [in Abu Dhabi],” Carter said. “One of the things that was really cool about going there was [that] it helped dispel some of my misconceptions about the region.”

NYU Abu Dhabi is still growing, with the goal of consistently enrolling 2,200 undergraduate students from their current 1,000. While the university remains relatively unknown today, its unique global emphasis and diversity allows for graduates to be able to lead on the global stage and adapt to various customs of countries around the world.