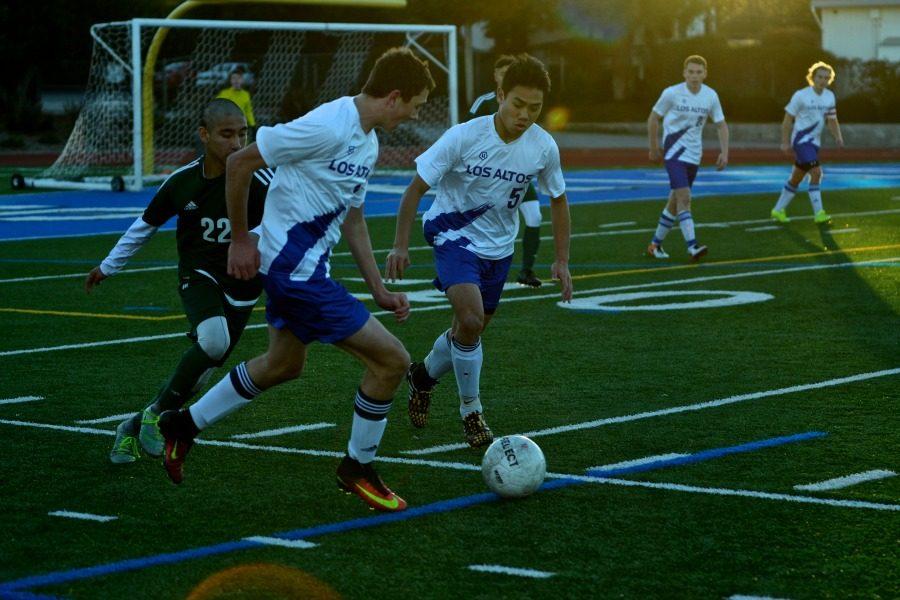 After being promoted to the higher level De Anza division for the first time since 2014, the varsity boys soccer team is 2-0 in league play and making their way to the top of the leaderboard. On Thursday, January 5, the Eagles secured a 4-2 win over Palo Alto High School.

“We were expecting a good game,” senior captain Albin Mollerstedt said. “[Palo Alto] had a good preseason, so we knew it was going to be tough.”

Los Altos started the game off strong, immediately controlling the ball offensively to create chances to score. In the first minute, junior Tyler Goloubef headed the ball against the crossbar, missing the header but helping  propel the Eagles’ offensive drive. Only four minutes later, junior Coby Zorn threw in the ball towards Tyler who then headed the ball over the Palo Alto defense to senior Albin Mollerstedt who finished the play with a close-ranged goal giving the Eagles a one-point lead.

After seven minutes, Coby, a starting center back, was tackled and injured his wrist, putting him out for the rest of the game. But this would not stop Los Altos’ offensive attempts as senior Victor Yu’s free kick curled top corner only to be punched out by the Palo Alto goalkeeper.

As the end of the second half neared, the game toned down with both teams being unable to find an opening. Los Altos led 1-0 at halftime.

The beginning of the second half took a bad turn for the Eagles, Palo Alto scored a goal off a deflection within the first two minutes to tie the game at one all. The Eagles came close to scoring when Victor played a long ball to Tyler whose shot soared over the goal.

The Eagles struggled to maintain their momentum as sophomore Kai Moos received a second yellow card, leaving Los Altos to play down with only 10 players. Palo Alto came close to scoring again after a player powered a shot towards goal, but it was stopped by junior goalkeeper Eitan Weiner. Los Altos took back the lead once again after senior Lars Joehnk played a low cross to sophomore Harry Allen drove the ball from the top of the box towards the goal and scored

“I saw Lars on the left hand side,” Harry said. “I thought I’d stay back. I called for the ball and he played it to me, I took my time and placed it left, and it went in.”

However, Palo Alto quickly responded after the kick off. Eitan attempted to save a shot, which rolled towards goal, junior Ivan Amaya attempted to clear the ball but failed. The game was tied at 2-2.

Right after Palo Alto’s equalizer, senior Henry Garcia-Camacho took a free kick and the ball bounced between the keeper’s legs into the goal, putting Los Altos in front again with a score of 3-2. With the game minutes away from ending, Lars played a through pass to Harry, who finished from a hard angle to seal the win for the Eagles with a final score of 4-2. Harry scored a game-high of 2 points against Palo Alto.

“This win means a lot,” Albin said. “We’re 2-0 now, and we moved up divisions last year, so it shows that we’re able to compete.”

Varsity boys soccer will next play against Mountain View High School on Spartan turf on Thursday, January 12. Their next home game is against Homestead on Tuesday, January 17.