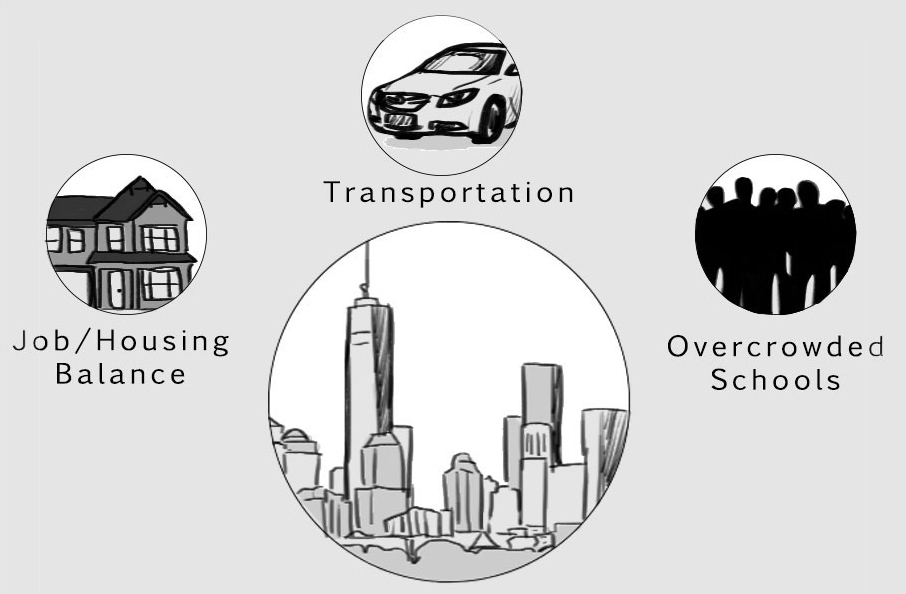 If passed, the North Bayshore Precise Plan would alleviate the housing crisis, but would strain the district's resources and could amplify traffic. Mountain View council members and the district are in communication about ways to decrease the impact on the district. Graphic by Anne Schill.

By Emma Kwan and Zooey Nguyen

The Precise Plan, which aims to address North Bayshore’s jobs and housing imbalance, will create an influx of students in a district that is struggling to accommodate a growing population in facilities which have already reached full capacity. The district is working on an agreement with Mountain View that would mitigate the impact of increased enrollment.

Accommodating the vast increase in students will likely involve building new schools, but the district is uncertain whether it would be able to attain the land and funding to do so. Building a comprehensive high school would be unfeasible as they require large plots of land, and land prices in Los Altos can range from $5 million to $15 million per acre. Los Altos occupies around 35 acres, but the district built the high school when land was much less expensive.

¨A smaller school on a smaller footprint without the football and soccer fields seems more practical,” Harding said. “There just aren’t plots of land of 35 acres sitting around.”

The district will begin negotiating and communicating with City Council and developers after the vote happens, with the goal of reaching an agreement where developers could offset some of the impacts of construction by providing the school district with land, buildings or money.

“At this point we’re just at the discussion phase,” Harding said. “We have made no proposal, and we are trying to understand the complexities of the project. We want the city council to be able to communicate what their issues are, but it’s safe to say that this number of students would have a dramatic impact on our campuses.”

Some residents have opposed City Council’s housing plans, believing that a high density of people in North Bayshore will amplify traffic congestion for work commutes. However, the Precise Plan is designed to decrease congestion on a larger scale by allowing people to walk and bike to work by situating people closer to their workplace and incentivizing people to find alternatives to driving by using VTA buses or the BART system.

However, the council is not solely counting on the probability that most people moving in will be nearby workers. To expand alternative transport options, the Precise Plan lays out plans to construct a reversible bus lane where traffic can travel both ways on Shoreline. The council has also been developing a plan to create an automatic or driverless transit system connecting North Bayshore with downtown Mountain View.

“The real key to encouraging ridership is to make the transit system convenient,” Council member Margaret Abe-Koga said. “The problem with our system right now is that it doesn’t run very often, and it doesn’t get people to where they want to go in a short enough time to make it worth giving up your car.”

Uncertainty over transportation has led to a debate over how the project should be phased, and in June, the council came to a 3-3 tie over the issue. Half the council believed that the initial part of building should be paused once 1,500 to 3,000 housing units are built, at which point the city would evaluate the state of transportation before deciding on whether to continue housing development. The other half believed that the city should follow the original Master Plan approach, which is to have periodic check-ins without pausing development. Mayor Ken Rosenberg was absent to break the tie, but sent in a note to express his support for the Master Plan approach.

As the vote for the Precise Plan approaches, developers, the city and the school district will continue to discuss the transportation and schooling conflicts associated with the plan.

“There’s something happening here that doesn’t happen in other places,” Harding said. “This kind of explosion in revenue coming in and the demand for employment bringing in people all around to live here, that’s a good thing. There’s cities like Detroit, the rust belt of the country, that would love to have these problems.”