No to Death (Penalty) 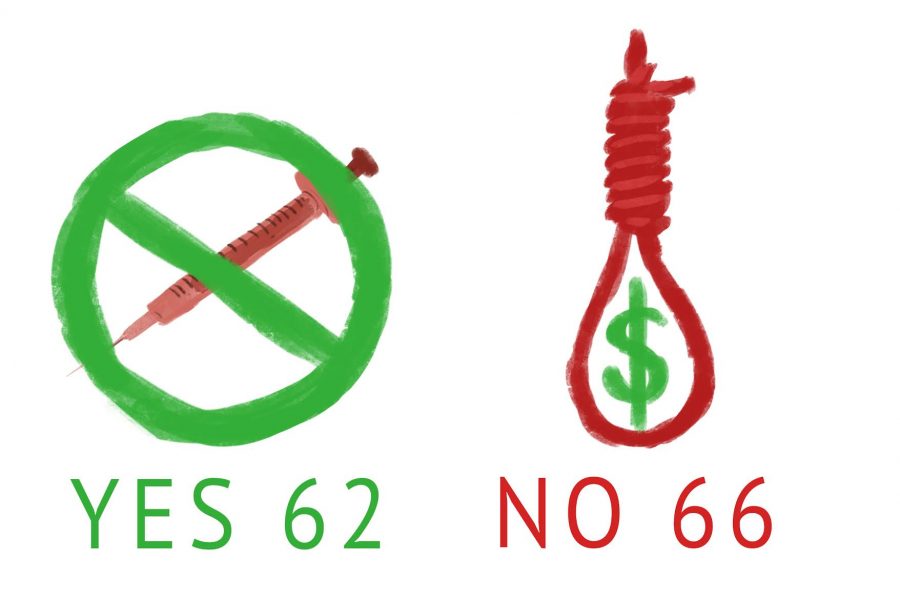 By Julia Santos and Michael Sieffert

Not only is Tuesday, November 8th the day of the presidential election, but it is also the day we vote against other major issues in the form of proposition ballots. Californians will have the opportunity to voice their opinions on issues ranging from education to drug pricing. Two propositions regarding the death penalty, 62 and 66, are especially pivotal for 2016 voters.

As the state with the most death row inmates, California’s decision on Proposition 62 (Prop. 62) regarding the repeal of the death penalty will have a powerful effect on the state. And with a multitude of moral and practical reasons, Californians should affirm the proposition.

Since 1976, across the world there has been a positive trend on the rise. Dozens of countries have abolished the injustice against humanity that is capital punishment. Among these nations, there is a glaring omission: while nearly every other developed nation has banned the death penalty, the United States continues to retain the practice.

The logic which supports the death penalty is simple: by stopping threats that warrant the harsh punishment, we create a safer society. It can be seen as society’s ultimate punishment, and also a very strong deterrent to committing crimes.

However, this logic is flawed. The absolute and draconian nature of this punishment no longer fits into our progressive society. By ending the lives of those we see as detrimental to our society, we become no better than the criminal.

Even with a repealed death sentence in California, those who were on death row will now face life without the possibility of parole. The proposition clearly states that “The measure would repeal the state death penalty and replace the maximum punishment for murder with life in prison without possibility of parole. It would apply retroactively to those already sentenced to death.” Thus, the punishment of life imprisonment effectively ensures the same severity, but with a chance to exonerate any wrongfully imprisoned inmates.

Though capital punishment remains a worldwide problem, this season voting-age citizens of California have the opportunity to end the cruelty with Prop. 62. The proposition would immediately end the penalty by taking all of those on Death Row off, commuting their sentences to life without possibility of parole.

On the other hand, if Proposition 66 (Prop. 66) is passed, the process of the death penalty will be sped up and require millions of taxpayers’ dollars to ensure that every condition listed under the proposition will be met.

While many advocates of the proposition point to the advantage that it mandates that all death row prisoners must work in order to pay restitution to their victims’ families, the proposition is very misleading and the economic harms it causes will far outweigh the harms.

“Prop. 66 is so flawed that it’s impossible to know for sure all the hidden costs it will inflict on California taxpayers,” former Attorney General of California John Van de Kamp said.

The biggest issue with Prop. 66 is the money that it requires in order to be successful. The program will be extremely costly as attorneys must be hired to re-examine cases and  to set final dates of execution. And in the end, the money cost to speed up the death penalty procedure can be used to house inmates serving life sentences

According to the California Appellate Project, there are 356 inmates, as of August 2016, that are all in need of habeas corpus attorneys and some in need of appellate attorneys as well to review their cases in order to speed up the death penalty. Along with the expenses of lawyers, other individuals such as investigators and other experts must be hired to fund defense teams for each case. Additionally, the state will give $50,000 per each case for investigation fees. Because of all of these expenses to hire certain people of different skills, it will cost California taxpayers around $106.8 million after the first year.

Between the two propositions, 62 is a clear “yes”, while 66 should fervently be voted against. If proposition 66 fails to pass, California could spend money in other areas, like education. The state would also be forced increase overall prison spending to maintain and construct new or current prison facilities. On the other hand, by affirming 66, we affirm an inhumane process. Putting expenses and other political decisions aside, no one should have the power to put an end to anyone else’s life.