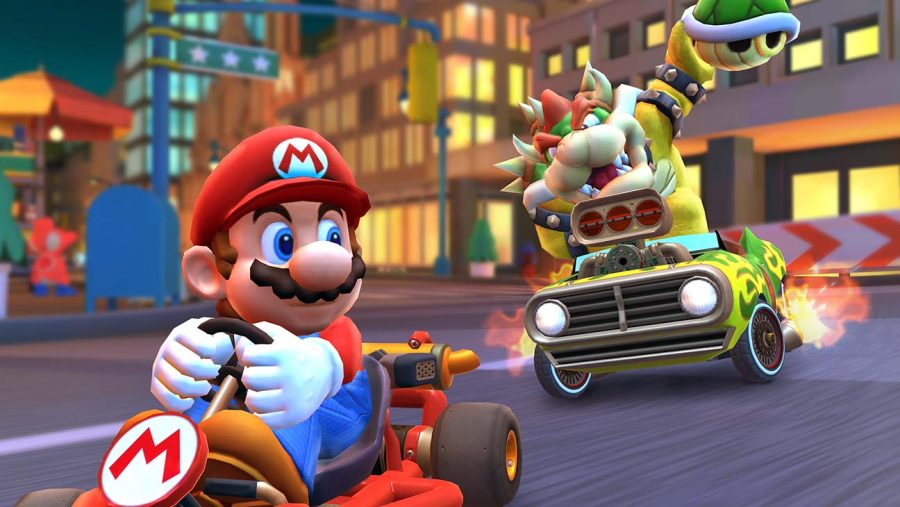 Bowser chases down Mario in Nintendo’s newest game, Mario Kart Tour. The game is currently free-to-play on all IOS devices.

Imagine a world filled with extravagant go-karts, fancy power-ups and characters from all throughout the famous Mario franchise. This is Mario Kart Tour, the first Mario Kart game to be released on a mobile device. The objective of the game is simple: race around a track and win first place. Although the premise might sound somewhat complicated, the natural enjoyment of the game and its social aspects make it so popular. But, despite the many mechanical issues that users have been experiencing, the mobile version of the beloved game has also deviated from the core ideas of the game itself.

Typically when playing a Mario Kart game, the items and currency earned in-game are available for all players to get with the exception of the money paid upfront. But in Mario Kart Tour, in-game currency can be bought with real money, and thus items can be too. This is in part due to the game being free to play, along with the appeal of exclusive items. Because of the pay-to-win nature of the game, there’s less of an incentive to frequently play the game because players who are willing to spend more money on in-game currency will simply be better equipped than those players who don’t spend money, giving them an unfair advantage. For the first time, Mario Kart is based on money instead of skill, which creates an unwanted change in the traditional game dynamics.

For most players, the pay-to-win nature of the game is overlooked in comparison to the social connection between them and others. In past versions of Mario Kart on other Nintendo devices, there was always a multiplayer mode in which players could play against their friends. However, Nintendo has struggled to create a similar feature with Mario Kart Tour–currently, the only mode available is single-player, which takes away the potential social interest involved in playing the game. Along with the lack of multiplayer, there has been no announcement of cross-platform play, or the ability for people on various mobile devices to play with one another. Although the availability of Mario Kart Tour on a phone is more universal, there’s still room for improvement when it comes down to the social features within the game.

There’s no doubt that the premise and ideas of the game are new to a mobile platform. They offer an exciting new challenge for players to beat all of the courses, and at the beginning, a desire to collect all the characters within the game. But as time goes on, the game’s longevity is sure to decrease. Rewarding those who spend more money and the limiting social features in-game proves Mario Kart Tour still has various flaws. Leaving these issues unresolved will eventually lead to the game fading out of its state of popularity.