Nike’s endorsement of Kaepernick: a touch (down) too late 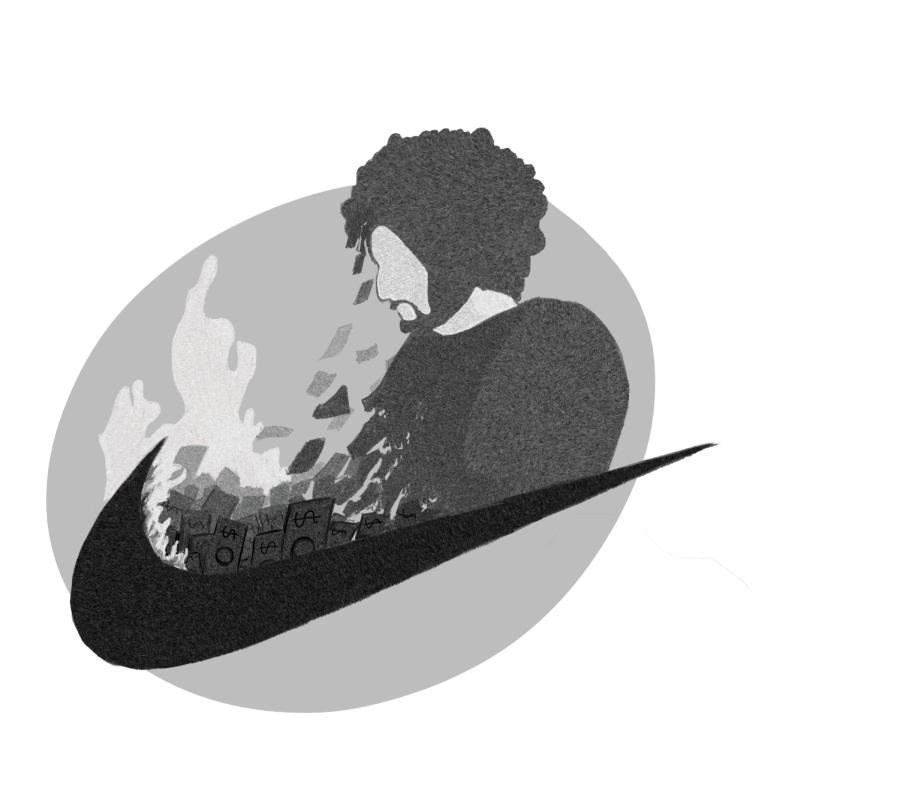 By Audrey Chang and Navya Singhai

Just do it. Well, Colin Kaepernick just did it. He protested against racial oppression and police brutality, but now he’s facing repercussions. Critics are burning their Nike gear and cutting off the swooshes in a show of rebellion against Kaepernick’s ideology and Nike’s new endorsement of the athlete.

Nike unveiled their contributions to Kaepernick’s charity and a new line of Kaepernick branded shoes and apparel through a Twitter post on September 4. But based on Nike’s history and their delayed endorsement of former San Francisco 49ers quarterback , it seems their new selection is based more on profit than beliefs.

Kaepernick first took a knee during the national anthem in August, 2016 to protest oppression, police brutality and racism. Athletes across America began kneeling to support  Kaepernick’s movement, sparking controversy and polarizing the public.

Kaepernick had been unemployed for the last two years after being pressured  into leaving the NFL when Nike chose him as the new star of the “Just Do It” campaign.  By endorsing Kaepernick, an inactive player, Nike is truly announcing their support of his fight.

Despite the backlash, Nike’s credibility and status actually amplifies Kaepernick’s message and herds support. As the world’s largest supplier of sports apparel, Nike has both the reach and power to impact the world’s ideology and promote equality among all races and genders.  However, considering the timing and trends from Nike’s past endorsement of similarly controversial athletes, it seems that this is a decision based more on profit and less on spreading a message.

Unemployed for two years, suffering from fierce public backlash and even receiving death threats, Kaepernick was being attacked, and no one was helping. Nike had the means to assist him, but instead of  offering Kaepernick support when he truly needed it, they opted to wait until the hostility had died down.

If they truly encouraged his message, Nike would have had his back from the start. When announcing the deal, Nike stated  that Kaepernick was “one of the most inspirational athletes of this generation”. Then why wasn’t Nike inspired to endorse Kaepernick when he needed it the most?

Some would argue that because Nike is a large company made up of people with different views, it takes time to make large company decisions that encompass the entire company’s beliefs. From that perspective, it’s understandable that Nike would want to see a potential for significant future profit before investing in such a contentious player.

Nevertheless, Nike has taken this risk before, and it panned out well.  Ric Munoz, a gay and HIV-positive runner, was endorsed by Nike in 1995. Similarly to the Kaepernick endorsement, Nike’s support for Munoz caused a comparable uproar among the public.

Yet despite the prevalent unaccepting mindset back then, the ultimate outcome was positive for Nike in terms of revenue and reputation. The company adopted a liberal and accepting position, impacting the public’s opinion on social taboos.

Nike banked on the same positive outcome for Kaepernick endorsement, and the gamble has paid off.

In spite of the negative responses, Kaepernick merchandise is selling out, as Nike expected it would. Since Kaepernick was made the star of the “Just Do It” campaign, Nike’s stock increased by five percent and the company’s overall value increased by six billion dollars.

The numbers don’t lie. Nike made this decision so late in the game because they  didn’t want to invest until there was an unquestionable guarantee for revenue. It seems like Nike isn’t trying to convey their beliefs. Rather, they’re playing along with what the majority of their customers support to appeal to a greater audience.

However, in this case,  the ends justify the means. Whatever financial reasons Nike had for supporting Kaepernick, at least they are supporting and spreading his message. The results are positive as a whole: Nike and Kaepernick’s protests against oppression, racism and police brutality are making a difference in the world.