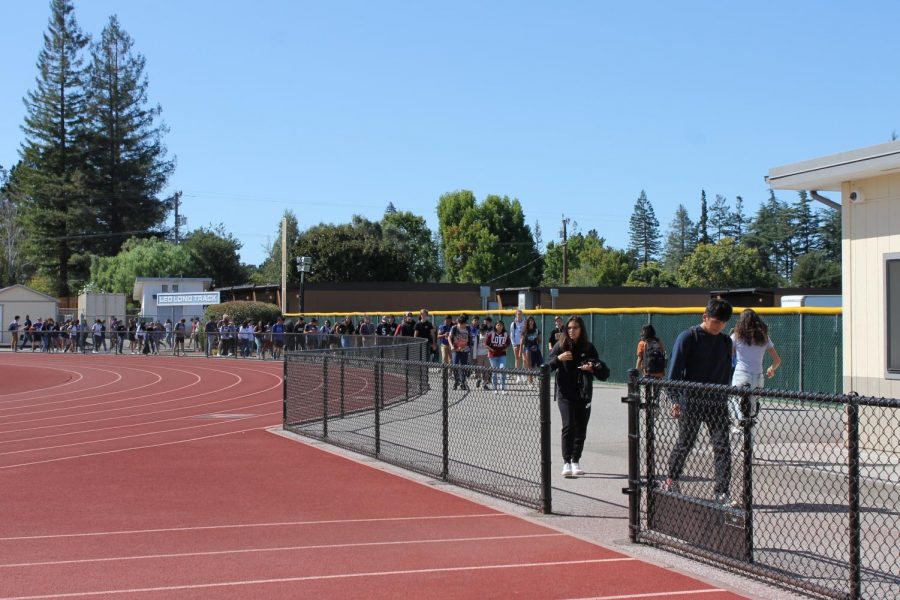 By Rachel Rudyak and Tomoki Chien

The school administration is piloting a new tardy policy giving students with longer walks to and from the portables additional time to get to class. The policy mandates that students consult their teachers on an individual basis in order to receive a passing period extension of 90 seconds. These extensions do not apply to periods at the start of school and after lunch, brunch or free periods.

The new policy seeks to reduce the recent influx of tardies caused by the added walking distance between the portables and the main campus. By analyzing tardy data compiled in Aeries, administrators found that many students were struggling with the commute to and from the portables in the first few weeks of school.

The new portables, located near the parking lot and baseball field, are housing the Social Studies Department until the completion of the two-story 500 wing building at the back of the school. Construction is set to be finished in 2021.

An alternative solution would have been to add time to all passing periods, thus changing the bell schedule itself and making the school day longer or cutting into lunch and brunch. However, the current solution of having students individually request an extra 90 seconds of time from their teachers means that the regular bell schedule won’t need to be disrupted.

The policy does not specify which walking distances qualify for an extension.

“Students should be able to get to class on time at their natural walking speed, but we also recognize that it’s just a reality that some students walk faster than others,” assistant principal Galen Rosenberg said.

Principal Wynne Satterwhite appreciates that the policy will help students become more independent due to the lack of explicit guidelines.

“[The tardy policy] lets students be proactive and advocate for themselves which is one of the things we’re trying to teach,” Satterwhite said.

The administration has an additional follow-up solution to help students with classes in the portables after brunch and lunch get to class on time. According to Rosenberg, the administration might add an additional bell that rings 90 seconds before the end of brunch and lunch that will remind students to leave at the right time for their own commute. At this time, the addendum has not been decided upon and therefore has no set introduction date.

While some students and teachers are happy with the introduced policy, others feel that it doesn’t truly solve the issue of added walking distance.

Students like sophomore Anisya Malinovskaya have classes in the portables after brunch and lunch and have to incorporate the walk into their breaks.

In addition, teachers aren’t able to start lessons on time regardless of whether or not they’re marking tardies.

“The tardies aren’t the problem,” sophomore Lily Aronovitz said. “It’s the fact that the class is starting a couple of minutes later which encroaches on our class time. The ninety-second grace period doesn’t do anything about that.”

Keeping in mind opinions from students and teachers, Rosenberg plans to run the trial of the new policy until the end of the first semester.

“I think in terms of what’s next, it’d be worth knowing whether or not students and teachers think it’s worth sacrificing instructional time, adding to the school day or losing lunch or brunch,” Rosenberg said. “We assume students and teachers would not be in favor of that [but] it would be nice to know for sure.”

With the trial policy in place, administrators will continue to monitor tardy data and feedback to decide on their next steps.