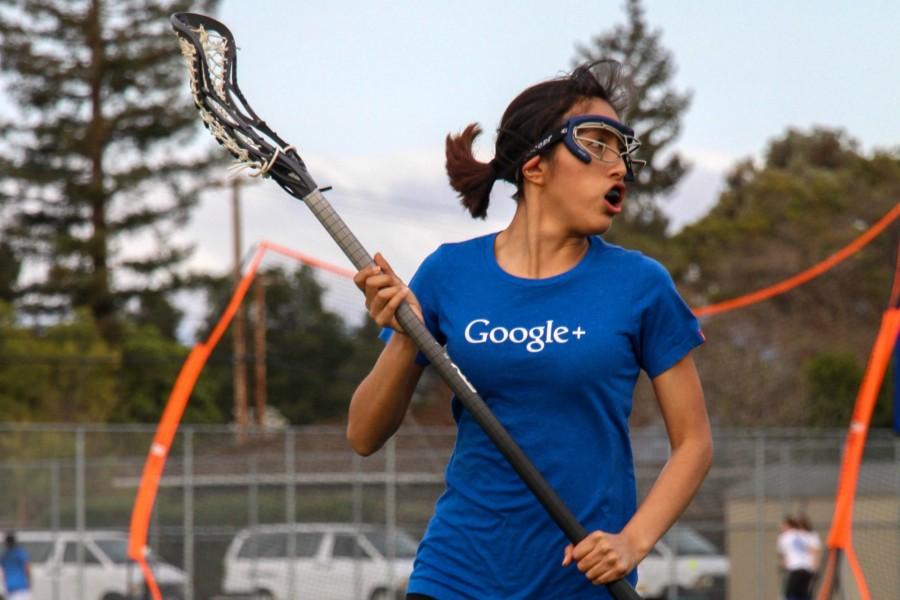 Senior Joceline Montebello looks for the ball in practice. Despite a relatively inexperienced squad, the girls lacrosse team hopes to do well this season. Photo by Michael Sieffert.

Hit the ground running, make a statement and set the bar high. The girls lacrosse team will be looking to accomplish these three things in its first-ever season at the school. The boys lacrosse team was added to the athletic department just a few years ago and now the girls have followed in their footsteps. The team will be led by head coach Jessica Lappe, who is an alumnae of the school and had played lacrosse for eight years, reaching heights as high as Division II lacrosse for Regis University. Since then, she has coached for seven years for both Tomahawk and Norcal Lacrosse and is now ready to take over the first girls lacrosse team at the school. Her experience will be vital to the team this year as many of the girls are new to the sport.

“I haven’t had a lot of experience playing lacrosse besides from eighth grade P.E. at Egan [Junior High School],” sophomore Diana Gonzalez said. “This is a brand new team with many people new to the sport, [but] in my opinion we will get the hang of it pretty soon.”

At the very least, the team will have chemistry, as a large portion of the players come from the field hockey team that competed in the fall. The roster includes a mixture of both upper and lower classmen, which is a promising sign for the future seasons of girls lacrosse. That being said, there is still a difference between the sports, and the girls will need time to adapt.

“Since many of the girls played field hockey, we are all very close,” Diana said. “Once we start playing games, that will be beneficial for communication.”

Freshman Katie Radcliffe will have a lot of weight on her shoulders, as she is one of the only experienced lacrosse players on the team. She started playing in third grade and will be expected to take a leadership role and help her teammates learn the game. Despite the pressure, Katie is prepared for anything coming her way.

“[I want] to help teach the sport to some of the girls who have not played before,” Katie said. “Lacrosse is one of the fastest growing sports and I’m stoked that Los Altos has a team [now].”

The action of implementing the girls lacrosse team is certainly a step in the right direction for women’s sports and will contribute to the strengthening of the school’s athletic department in the short and long term.

“Adding a girls lacrosse team to Los Altos was an amazing idea,” Diana said. “It gives girls the opportunity to explore a different sport and ramps up competition.”

The team will be writing history in its first ever season, and will look to achieve its goals at the same time.

“[Our] goals for this year are to have fun, have the girls play their best, have the girls experience growth both on and off the field and start the foundation for this new sport for the coming years ahead,” Lappe said. “I look forward to a productive and exciting first year of lacrosse at Los Altos High School.”