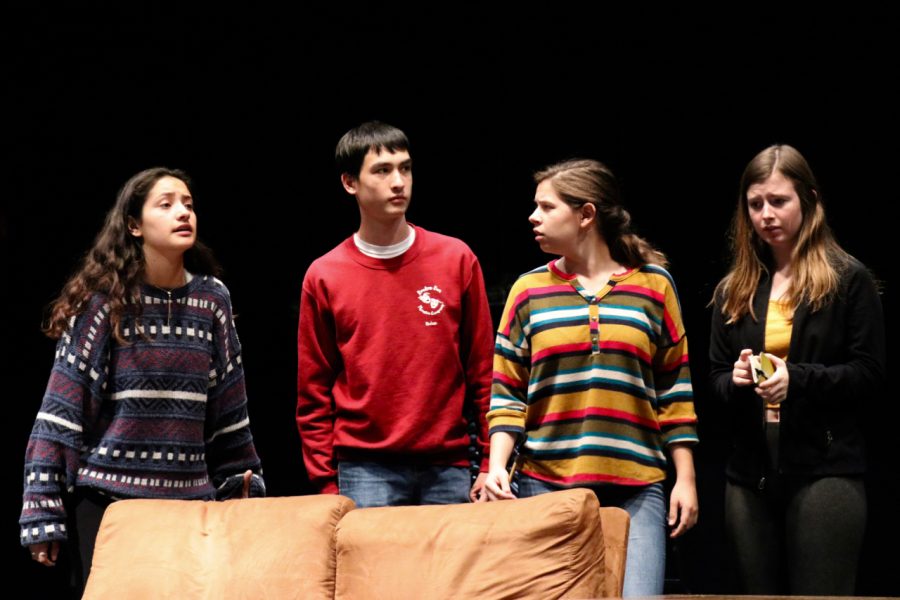 In Broken Box’s forthcoming play, “Don’t Try to Wake Him, Hand Me the Shovel,” new members, senior Desiree Medina and sophomore Nolan Taylor, have been chosen to play the lead roles. Broken Box is set to perform from November 15 to 17 in the Eagle Theater. This production is a comedic mystery that includes mistaken identity, disorientation and a lot of running around.

First year members to Broken Box have not played main parts since the 2011 show “There’s No Place Like Rome.” Generally, veteran acting students attain lead roles due to their greater experience. Nolan and Desiree, however, are two of the few exceptions.

Although both of the new members have had limited exposure to the performing arts, what set them apart was their interest. Desiree took the Acting I course her sophomore year and Nolan attended the Peninsula Youth Theater, a two-week-long theater group, in elementary school.

“At first I was terrified,” Nolan said. “I’d never had to memorize so many lines or even be in a two-act play. And it’s definitely a challenge to have such a large role, but I’m having a lot of fun and the other [members] are really helpful.”

It is very rare for Broken Box Director Nancy Moran to select newcomers for a main role. However, she sensed that Desiree and Nolan had remarkable tone and style that fit the roles of the main characters.

Through Moran’s guidance, Nolan and Desiree gained vital skills to improve their knowledge on acting. Additionally, the seasoned Broken Box students played an important part in preparing the novice actors for their performance by giving advice and helping new members develop their characters.

The play, written by Pat Cook, is about two news reporters attempting to uncover the truth behind the speculations concerning the mysterious Billingsgate Mansion. As these reporters enter the haunted mansion, they grow paranoid of encountering supposed ghosts.

While these reporters explore the mystifying area, different characters from dissimilar backgrounds wind up in this mansion: two convicts, a movie director, a cheerleading squad, a policeman, paranormal investigators and more.

Each personality builds off energy from each other which creates excitement from the start to finish of the production.

“There is so much going on at all times during the play,” Desiree said. “The dialogue is also incredibly funny and quick. Throughout the play, there will be calm moments that turn into chaos at the drop of a hat.”