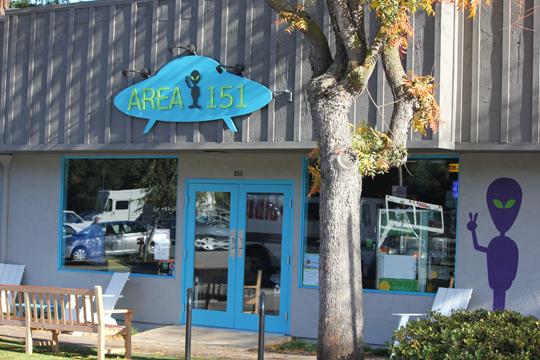 It would be no overstatement to say that going to arcades is one of my fondest childhood memories. Whether it be parties, playing with friends or spending time with the family, the local arcade center was the number one pick more often than not. It was a rare occasion when I didn’t play alley ball or a crane game for a few months. Now, Area 151 has created an opportunity to relive one’s childhood at the convenience of a simple stroll through downtown Los Altos.

Area 151 is a suburban arcade, with a room size slightly bigger than the Starbucks down the street. The atmosphere is quite youthful, with kids scampering around the games while eagerly tugging at their parents’ hands. There is only one employee who has to oscillate between manning the cash register and fixing broken machines.

The room is filled with at least 20 different arcade games and a prize area over in one corner, where tickets can be exchanged for prizes ranging from a bouncy ball to an iPod Touch. The token exchange rates are four for $1, 22 for $5 (two extra tokens), 48 for $10 (eight extra tokens), and 100 for $20 (20 extra tokens). Each game requires between one to five tokens to play.

While I thought that I wouldn’t last 10 minutes without becoming bored, I found myself $13 poorer within 2 hours. Thanks to my educated decision-making, I was able to spend my money on the three most exciting games.
Connect Four

This machine is an electronic and enlarged version of the classic board game. It costs two tokens to play and the player can choose either to play against the computer or against another person (in which case four total tokens would be used). The rules are the same as the original, in which players drop their respective colored piece into a grid in an attempt to line-up four consecutive chips. The victor will receive 20 tickets and have the chance to play “chance roulette” that will supply them with a random number of extra tickets. The loser will only get five tickets. I recommend playing against a fellow friend, unless you want to have the dehumanizing experience in endeavoring to outwit the impenetrable Connect Four grandmaster computer.

In this game, the player plays a game of Blackjack, in which they try to get as close to 21 as possible by adding up the face values of playing cards. However, the cards are chosen by dropping tokens into a rotating roulette that has card values at each end. An appropriate number of tickets are rewarded relative to how close the total number is to 21. If the player gets Blackjack by using only two cards to get exactly 21, they get tickets in the jackpot at the time. The jackpot starts at 100 tickets and increments by 2 every time any player ends with anything but a Blackjack. This game is probably the most financially beneficial out of all of them, as I was able to dish out 7 Blackjacks in 13 tries. Getting 100+ tickets with 2 tokens is nothing to sneeze at.

The goal of this game is to successfully roll a token down a track into a tunnel to gain extra tickets. The pathway has no siderails so it will easily slide off into the gutters if the angle isn’t precise. Even if you do get it right and the token successfully goes all the way, the game automatically tilts the track so the same method won’t work two times in a row. This is probably the most challenging game to beat of them all. The strategic aspect of figuring out the angle to drop the token in accordance to the tilted track was quite addictive. A good 10 of my tokens were spent on this game trying to reach the tunnel.

Although afterward I dwelled on my financial irresponsibility, playing the old classics and being the proud owner of 1402 tickets certainly felt like an accomplishment. So, if you ever have $5 lying around that you don’t feel like spending on the taco truck, consider dropping by Area 151 on 1st Street in Downtown Los Altos.