We are finally less than two months away from the NBA playoffs, and a lot of basketball has unfolded before us this season. In a year full of surprises and great performances, a select group of stars have risen above to the top of the league in their respective specialties. While there are still two months left to make a final determination of season awards, here is the Talon’s pick of the top performers of the NBA season thus far.

MVP: LeBron James, SF, Miami Heat
He accomplished an unprecedented feat this season: 6 straight games with over 30 games while shooting at least 60 percent.

Defensive Player of the Year: Andre Iguodala, SG, SF, Denver Nuggets
Iguodala may not be the league leader in steals, but his defensive presence disrupts the entire perimeter play of the opposing team. He fights for every loose ball, consistently boxes out, gets in defenders’ faces, and viciously forces turnovers. Iguodala is the smartest and most committed defensive player in the league.

Offensive Player of the Year: Kevin Durant, SF, Oklahoma City Thunder
KD leads the league ONCE AGAIN in scoring, averaging 28.8 points per game. KD is a scoring machine, and cannot be stopped. He is headed for his fourth scoring title in a row. However, he does have the fierce Carmelo Anthony sneaking up behind him. Anthony is averaging 28.4 points per game, only 0.4 per game less than KD. It will be interesting to see who takes the title at the end of the season, but don’t be surprised to see KD pull into the 29’s soon.

Rookie of the Year: Damian Lillard, PG, Portland Trail Blazers
He is a veteran among first year players, leading all rookies in points and assists. In the end, Lillard is truly a future star of the league. Lillard is averaging 18.5 points, 6.4 assists and 3.3 rebounds per game.

Most Improved Player: Paul George, SG, S, Indiana Pacers
Quite simply put, he went from being the third scoring option on the team last year to an All-Star this year. He is an elite defender and freakish athlete, not to mention one who gets buckets. George is becoming an all-around great player, averaging 17.8 points, 7.9 rebounds and 4.0 assists per game. Most Missed Player: Derrick Rose, PG, Chicago Bulls
We all want D-Rose back. He’s the best point guard in the NBA (when healthy) hands down, but he has yet to play a game this year due to surgery on a torn anterior cruciate ligament  last season. We hope to see him return to action sometime in the coming months. However, Rose has stated that he won’t come back until he feels “110 percent.” Keep in mind that it could mean next season. With a former league MVP point guard on their team, the Bulls will take no risks this year with Rose’s condition, regardless of their playoff spot.

Sixth Man of the Year: J.R Smith, SG, SF, New York Knicks
J.R is a monster. He scores, he rebounds, he gets assists–and most importantly, he closes games when it comes to crunch time in the fourth quarter. A case can also be made for Jamaal Crawford of the Clippers (who leads all bench players in scoring this season), but Crawford lacks Smith’s defensive intensity and consistency.

Coach of the Year: Mike Woodson
Woodson has brought something to the Knicks that they have severely lacked in recent years: defense. The impact can be seen directly in their record. It’s simple; defense wins games.

Team of the Year: San Antonio Spurs
Once again, the Spurs have subtly slipped under the radar as the most victorious team in the league. The team has the best record in the league, along with outstanding coaching and leadership by head coach Gregg Popovich. The Spurs is not the flashiest team in the league, but certainly the most fundamental and impressive.

Shaqtin-A-Fool leader: Javale McGee, C, Denver Nuggets
Just watch the highlights. McGee’s basketball IQ is about the same as a two-year-old playing on a Fisher Price baby hoop. Despite his big blocks and athletic finishes, he has developed a reputation as a complete knucklehead on the court.

Best Dressed: Russell Westbrook, PG, Oklahoma City Thunder
Russell doesn’t really care what people think of his style. A lot of criticism can be made about his clothing selection and color combinations, but nobody can deny that Russell has the most creative sense of style. Look out, Craig Sager, you’ve got some pre-game suit competition. 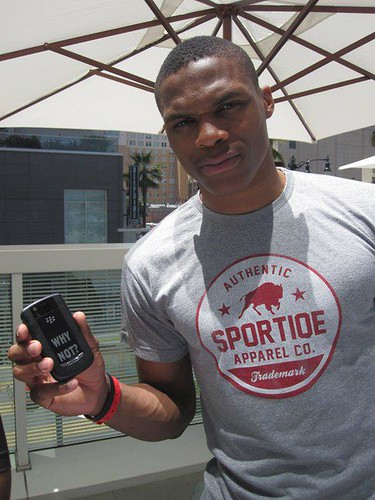