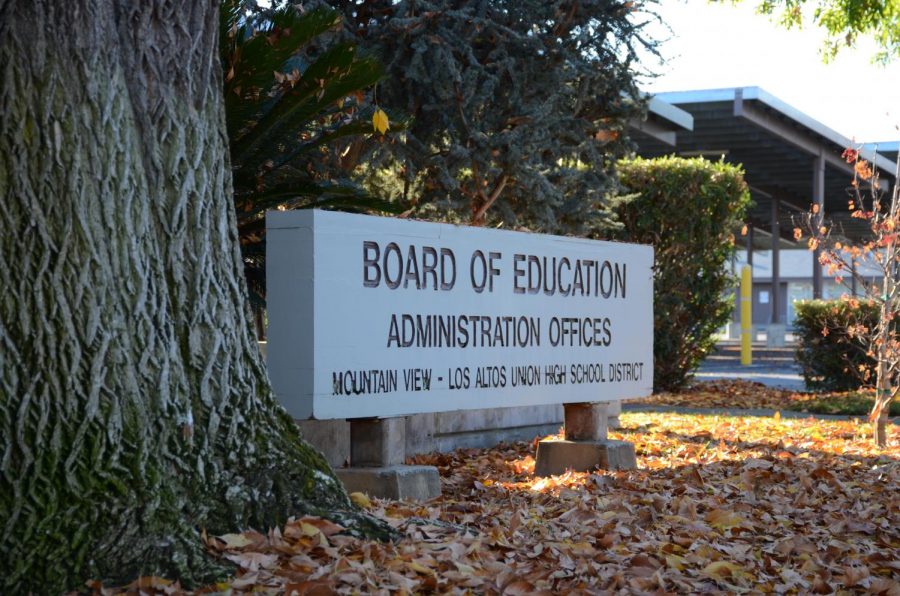 The MVLA District will begin its hybrid return once the County hits the orange tier or coronavirus restrictions.

This story has been cross-published from the Midpeninsula Post, a team of independent student journalists serving Palo Alto, Mountain View and Los Altos.

This story will be updated with additional comments and information at a later date at this link.

The Mountain View–Los Altos School District will take its first steps to a hybrid return once the county hits the orange tier of coronavirus transmission; that decision comes following the Board’s vote last night to approve Superintendent Dr. Nellie Meyer’s coronavirus “matrix,” or process for approving a return.

The plan outlines a transition for the general student body into a hybrid return at the yellow and green tiers, with the orange tier being used as a trial.

“It really is distance learning for the most part in orange, but it would really be bringing back and phasing in hybrids when possible,” Meyer said. “I see orange as being where we might determine we might want to hone in on a certain class level or a certain program.”

According to the State’s coronavirus dashboard, Santa Clara County has a 9.6 percent test positivity rate over the past two weeks. In order to fall to the orange tier, that percentage needs to fall to at least 4.9.

HOLES IN THE PLAN

While Meyer’s plan does detail the return broadly, it leaves a handful of significant decisions for later — namely, what hybrid model the District would follow once hitting the orange tier.

Previously, Meyer and Distance Learning Administrator Teri Faught presented three options for a hybrid return: “rotation,” “AM/PM” and “week-on/week-off” models. Trustee Phil Faillace expressed support for the “AM/PM” model, but that decision will ultimately be made at a later date.

“All the options are challenging, and they each come with benefits and drawbacks,” Meyer said. “When you do switch from one mode to another, there is an implementation challenge and a learning curve, and we also are making sure that safety protocols are in place.”

Board President Sanjay Dave, who dissented in the 4–1 vote, argued that the trial phase of the return should take place in the red tier, rather than in orange.

“The concern I have with this timeline is the disruption it would cause with the implementation of the hybrid program — there would be a learning curve,” Dave said. “It’s a concern of the students that when they go into a hybrid, they may not be grouped with the same teacher or classmates. … I would like to move [the return earlier] and bring students back in the red where they can begin establishing relationships with the teacher and classmates.”

Prior to the vote, Meyer assured the Board that students’ schedules would remain largely the same, unlike the Palo Alto Unified School District’s scrapped in-person return plan; that schedule swap had been a large concern amongst community members.

The return, however, faced mixed reactions from community members, with teachers cautioning against, and many parents pushing for.

Los Altos Latin and social studies teacher Krista Greksouk acknowledged a “loss of learning” in distance learning, but ultimately argued for the District to remain under the remote model.

“[In March] it took us at least a month to have everybody adjust to learning and teaching online,” Greksouk said. “If we did go to a hybrid model, I fear it’ll take a similar amount of time for everybody to adjust. Subjecting [students] to a new schedule and new model of learning when they’ve finally come to understand and be used to what we’re doing now would be a mistake.”

Greksouk, along with just under a dozen other MVLA teachers, argued that students would learn more under a continued remote program, as opposed to splitting classes and following restrictive safety protocols under a hybrid model.

The only difference, Bennett noted, would be that half the class would have their faces obscured by masks.

“This pandemic has certainly been a marathon, and at times we’ve had no idea what mile we’re on,” she added. “Honestly, now we’re so close to that finish line. As a teacher and a mom, I definitely want us to go back to normal school as soon as it’s safe to do so … but I urge the Board to wait until we can do this safely and have full classes. All the hybrid models have serious flaws which will cut into the quality of the education we’re able to give our students.”

At the time of publication, the Post was unable to reach Greksouk or MVLA Teacher’s Union President David Campbell for additional comment.

Los Altos High’s student Board representative, Riley Capuano, argued that distance learning is not as effective as it was made out to be by teachers; she also agreed with Dave in that the District should begin its return in the red tier.

“I’m obviously not a teacher so I don’t have the same views as them,” she said. “But I feel like they are kind of romanticizing what distance learning actually is. I feel like if we went back to school, even though we’d be 6 feet apart, those interactions would be so much more meaningful.”

About half a dozen MVLA parents echoed what Riley said, telling the Board that their children are “suffering” under distance learning and would greatly benefit from an in-person return.

A handful of those same parents also criticized the District for not having a more fleshed-out plan.

“I don’t think we should force teachers to go back, but it is the District’s responsibility to create a safe environment where the teachers want to go back,” MVLA parent Wendy Yu said. “How can we talk about when to reopen when we don’t even know what hybrid model we’re going to use?”

Carly Heltzel contributed to this report. This story will be updated with additional comments and information at a later date at this link.