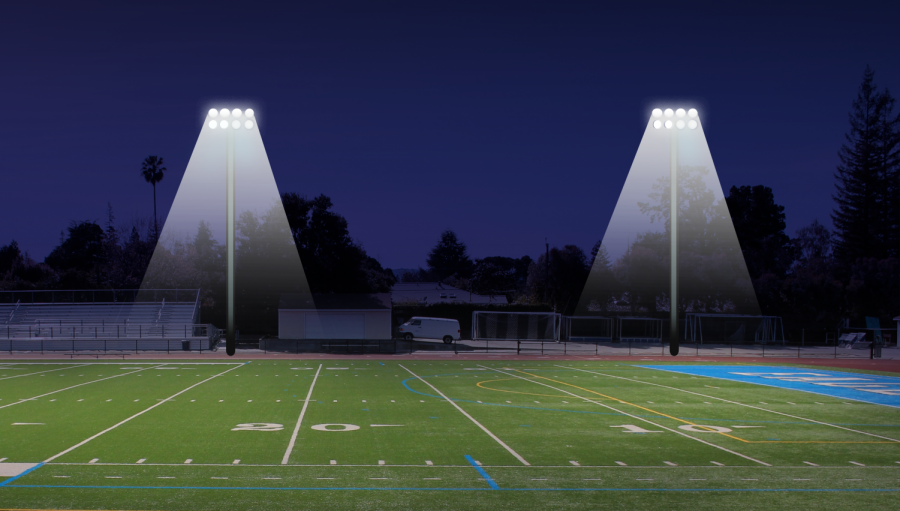 At the November 13 MVLA School Board stadium lights study session, all five board members agreed that stadium lights would provide a net positive benefit to the MVLA community despite local debate over the supposed benefits and disadvantages of the installation. The board will soon begin a five-step plan recommended by MVLA Superintendent Jeff Harding to draft a formal proposal for the stadium lights, as this must be completed before an official vote is taken.

At the meeting, many supporters said that installing stadium lights would not only benefit after-school activities like marching band and graduation but also allow for more athletic practices and games in nighttime conditions. Field sports would be able to practice in better, cooler conditions and students would not need to skip as many sixth and seventh period classes. Nighttime games would also boost school interest in home games and provide a more spirited school environment.

“We should be able to play on Friday nights like an actual football varsity team,” junior Alex Tuikolongahau said. “We shouldn’t have to play at 3:30 in the afternoon. We need lights.”

Opponents of the stadium lights, mostly consisting of residents that live near the high schools, argued that potential negatives such as noise, light spillover and excessive spending outweighed potential positives. Many voiced concerns about how their quality of life would be affected if stadium lights were installed.

“I am very concerned about the negative effects such a decision will have on our neighborhood: nighttime noise, increased parking and traffic and safety to name a few,” Los Altos resident Terry Wong said. “We can already hear the loudspeakers and the band room during the day. I’ve seen the traffic congestion during drop-offs and pickups on Valencia [Drive]. I have seen trash thrown in our backyard. Having stadium lights will only extend these issues into our nighttime.”

Although all five board members have voiced their support for stadium lights, nothing is set in stone yet. Currently, the board is planning to start drafting a stadium light policy with stakeholder groups, which is the first step of Harding’s drafting timeline. Once it’s finished, Harding will present the draft policy to the MVLA School Board trustees for approval. If the draft policy is accepted, it will then be presented to the community; if not, revisions to the policy will be made until all groups are satisfied.

Following that, a funding proposal for a light installation environmental impact report will be drawn up. An environmental impact report (EIR) is a report of significant environmental effects of proposed projects; for the stadium lights, the EIR will mainly consist of information from the opposition about noise and light pollution and possible neighborhood disruptions that the stadium lights could bring about. The EIR will also identify possible ways to minimize those effects and describe reasonable alternatives to those projects.

If the funding is approved, the board will contract a form to initiate the EIR, which is about a 38-week long process. As soon as the EIR is completed, the board will officially vote on whether or not to move forward with the stadium lights and begin the process for construction. This vote will not include MVLA board member Joe Mitchner since he will be retiring prior to the decision, but if the EIR and construction proposals are both approved, it is estimated that the stadium lights will likely not be installed for at least another two years.

“It is important for everyone to understand that the board is not choosing between what sports boosters want and what neighbors want,” board member Phil Faillace wrote in an email to the Talon. “Rather, the board has engaged the entire MVLA community in a process of ‘balancing the interests’ so that the community may [eventually] realize an optimal combination of the benefits of having lights and the benefits of not having lights.”