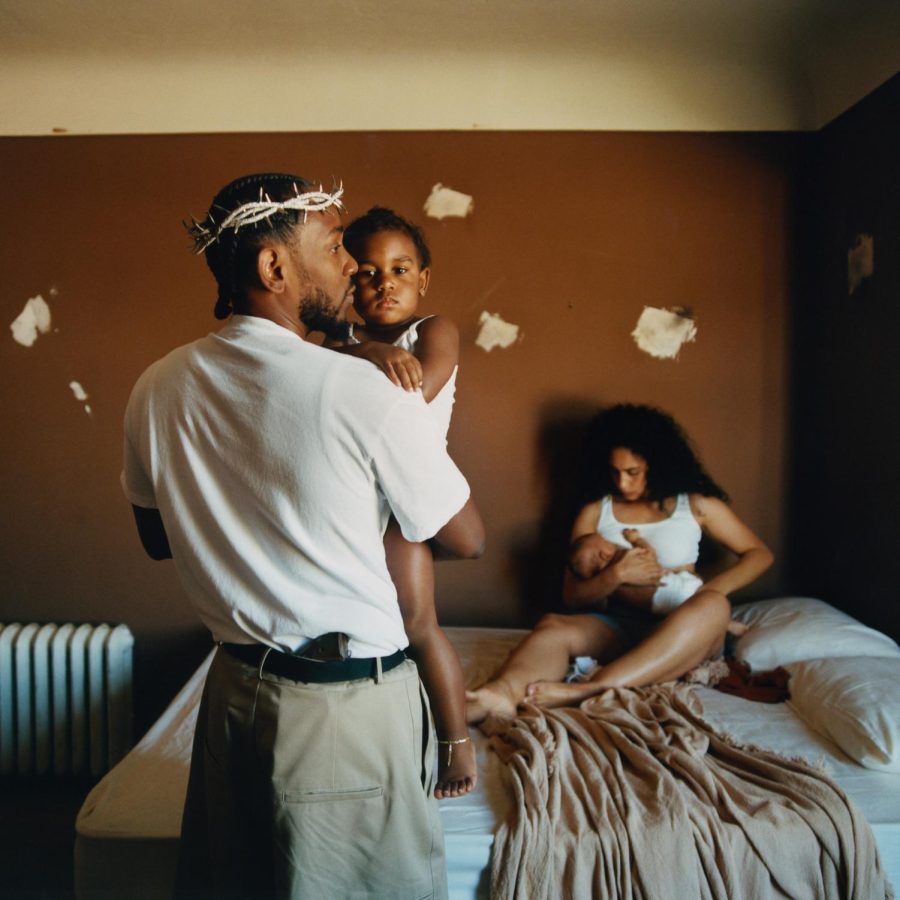 “Mr. Morale & The Big Steppers,” out today, May 13, doesn’t live up to Kendrick Lamar’s past records, but it benefits from solid production and Lamar’s characteristically introspective lyricism.

The few glimpses the world got of Kendrick Lamar leading up to the release of “Mr. Morale & The Big Steppers” predicted very different albums. Blog posts predicted an introspective, religious Lamar disconnected from modernity; verses on his cousin Baby Keem’s album “The Melodic Blue” displayed a virtuosic yet humorous Lamar willing to take risks; promotional single “The Heart Part 5” promised a socially conscious and grounded Lamar. “Mr. Morale & The Big Steppers,” released today, May 13, is a combination of all three, a hodgepodge of introspection, bangers and culture-focused cuts. “Mr. Morale & The Big Steppers” is as powerful and personal as it is scattershot or even generic, and is ultimately Lamar’s least cohesive record. It fails to reach the high bar set by his past material, but bonded with a dynamic instrumental palette, it’s an enjoyable, well-produced and honest reflection of Lamar.

Lamar’s music is traditionally marked by creative production, and “Mr. Morale & The Big Steppers” is, for the most part, no exception. Much of the album is avant-garde and innovative, and those tracks’ experimentation serves to the album’s benefit. Opening track “United In Grief” pairs calm, jazzy instrumentation with jarring percussion, providing an anxious, confused atmosphere that complements Kendrick’s fast flows and lyrics about empty materialism, depression and death. “Mr. Morale” features dark synths, sub-bass hits and vocoded melodies, lending a dark atmosphere to the track’s discussion of trauma, while songs like “Crown” and “Mother I Sober” have minimalist and classical-infused instrumentals that strip percussion back entirely.

However, many of the songs also imitate popular styles with varying levels of success. “Rich Spirit” is a soulless, boring retread of an already-mediocre strain of pop rap, but the horn-laced trap song “N95” is infectious and catchy, infusing a unique, spacey atmosphere with recognizable trap percussion. The album blends the instrumental themes of Kendrick’s past music, bringing a newfound diversity to the album’s sound at the cost of cohesion. Past Lamar albums featured complex instrumentals that created consistent atmospheres, but “Mr. Morale & The Big Steppers” rarely maintains a persistent mood for longer than one or two tracks.

Despite conflicting melodic themes, “Mr. Morale & The Big Steppers” is held together by Lamar’s writing, which truly elevates his music. Lamar’s past albums have told powerful stories about his upbringing in the Compton, Calif., hood, his view of politics and his visceral connection to hip-hop’s past. However, where past albums like “To Pimp A Butterfly” succeeded mostly through conveying social commentary, “Mr. Morale & The Big Steppers” excels in personal difficulty while falling short in social critique. “Father Time” is a detailed elaboration on Lamar’s parental issues, and “Mother I Sober” is a heart-wrenching ballad of trauma and sexual abuse that gives the album its emotional apex, augmented by Portishead member Beth Gibbons’ haunting chorus and outro. “Auntie Diaries” addresses Lamar’s experience with combating internalized queerphobia, and while its language is certain to stir up controversy, its sentiment is just as important as it is impactful. The album’s strict social commentary is less moving, though — Lamar speaks on the pandemic, so-called “cancel culture” and other societal issues without coming to any real insight, a disappointment in comparison to some of Lamar’s most acclaimed material.

Like Lamar’s past projects, “Mr. Morale & The Big Steppers” is thematically and vocally held together by a slew of features, who deliver contributions of varying quality. Most of the album’s rap features are unremarkable, and while they bring new voices to the album, they’re not impressive enough to make an impact. Kodak Black (who is, confusingly, a major part of the album) phones in his verse on the uninteresting “Silent Hill,” and Baby Keem’s chorus on “Savior” clashes heavily with the song’s instrumental. However, unexpected appearances improve the album: R&B artist Sampha delivers a smooth and gorgeous hook on “Father Time,” and the aforementioned Beth Gibbons appearance provides a perfect complement to Kendrick’s heavy bars on “Mother I Sober.” “We Cry Together” prominently features one of the most emotionally dynamic features from actress Taylour Paige, who sounds on the verge of tears while engaging in a rapped relationship battle with Lamar.

Even if “Mr. Morale & The Big Steppers” is occasionally generic and mediocre by Lamar’s standards, it couldn’t have been made by anybody except him. While the project’s quality is somewhat variable, the album features Lamar’s characteristically amazing production and songwriting, and it feels like an honest reflection of Kendrick’s mentality in 2022, just as his previous albums did throughout the 2010s. “Mr. Morale & The Big Steppers” might be inconsistent, but it’s far from anonymous.