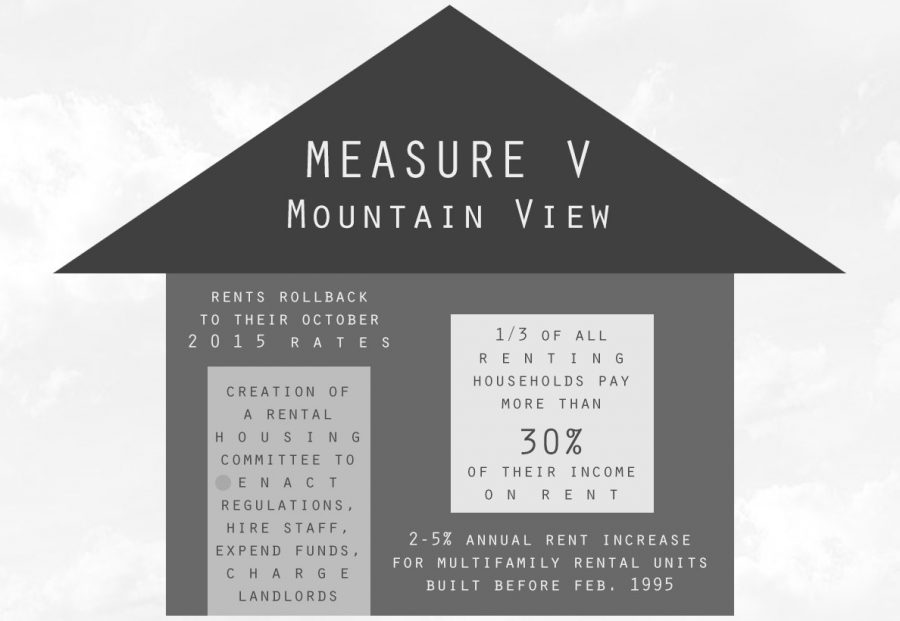 By Michael Sieffert and Haley Ecker

On the ballot last month, the citizens of Mountain View voted in favor of Measure V, which intended to curb growing rent and eviction problems across the city. Measure V passed with 53 percent in favor and 47 percent against.

Starting Friday December 23, Measure V will allow rent to only increase between 2 and 5 percent per year, based on the Consumer Price Index to follow inflation, for homes built before 1995. Rent would also roll back to the rates in place from October 2015. In addition, the measure creates a Rental Housing Committee to enact regulations and determine the rent increases or decreases based on hearings from landlords and tenants.

Recently, Mountain View’s Consolidated Plan, which outlines the needs of the city’s low-income population, discovered that nearly one-third of renting households pay more than 30 percent of their income toward rent and housing costs. Between 2011 and 2015, rent has increased in Mountain View by more than 52 percent. Groups such as the Mountain View Tenants Coalition recognize the struggles of low-income households to keep up with increasing rent and see Measure V as a way to protect citizens from this epidemic.

“Many are living in fear of unpredictable rent increases,” the Tenants Coalition Website said. “Because of a chronic housing shortage, average asking rents for a one-bedroom apartment have soared… forcing many from the city, separating friends and family members and making some homeless.”

Because Measure V is a charter amendment, Mountain View City Council cannot repeal the ballot measure unlike previous ordinances regarding rent, and it can only be repealed or revised during the next election in 2018. Previous rent control campaigns have been unsuccessful in Mountain View because of organizations such as the Silicon Valley Association of Realtors and California Apartment Association, which lobby against rent control.

To protect tenants from eviction, City Council voted 6-1 to enact an emergency ordinance at a City Council meeting on Tuesday, November 15. The measure will prohibit landlords from evicting tenants without just cause and will be in effect until Measure V is put in place on December 23.

City Council passed the ordinance due to a reported increase of no-cause evictions after Measure V passed, possibly due to a projected decrease in rent prices which may have caused landlords to increase evictions.

“Over the past couple of weeks, staff has noticed that there has been an increase in complaints about no-cause evictions,” City Attorney Jannie Quinn said during the City Council meeting.

City Council had hoped that a similar Measure W, created by City Council, would pass instead of Measure V, but the measure lost by a 704 vote margin. Measure W would have required a tenant-landlord dispute resolution program in which renters could dispute rent increases exceeding 5 percent per year. Measure W would have also allowed the council to manage the budget for this ordinance, but the Rental Housing Committee brought upon by Measure V can maintain a budget without council oversight.

“I’m disappointed… we wanted something fair as an alternative,” City Council member John McAlister said to the Mountain View Voice.

According to City Council member John Inks, rent control may present a problem in regards to the current housing crisis. Inks believes the new measure will not alleviate housing costs in Mountain View and will only hurt the housing market as landlords find it harder to rent with lower pricing.

“Most economic think tanks… point to negative aspects of rent control,” Inks said. “It actually shrinks the housing supply over time that necessarily leads to increased costs… It leads to disincentives to invest in rental housing and that tends to weaken the market.”

Despite Inks’ argument, advocates of Measure V still believe that the measure will benefit the economy because residents will have more money to spend on items other than rent.

“This is a victory,” Measure V advocate Maria Marroquin said to the Mountain View Voice. “This is our time; this is our campaign.”