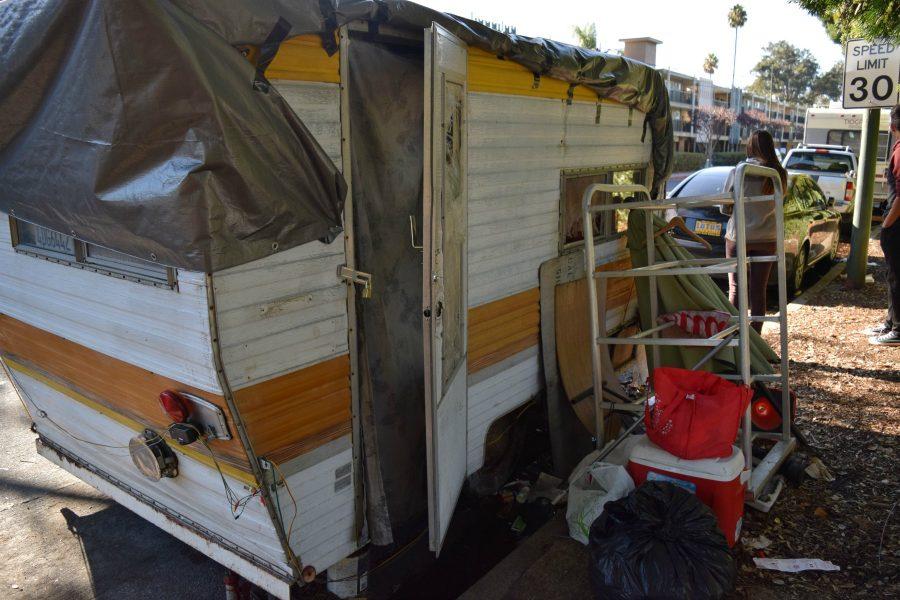 A RV idles on Crisanto Avenue, which is home to a majority of the 126 RVs around Rengstorff Park. Mountain View City Council recently allocated $196,000 to improving quality of life for RV owners. Photo by Francesca Fallow.

Al, a Mountain View resident who wanted to keep his last name anonymous, left his home in Dallas, Texas, six or seven months ago to take care of his mother after his brother died. Unable to renew his security guard license in California to secure a job in the new area, Al couldn’t make enough money to rent an apartment in Mountain View. He currently lives in an RV that he purchased here while he waits to turn 62, when he predicts he will have enough financial security via social security benefits to leave the city and its high cost of living.

“After my mom broke her hip… I had nowhere to go,” Al said. “Money ran out, and it’s an arm and leg just to live around here.”

To help residents like Al, Mountain View City Council passed a motion in October to allocate $196,000 to the RV park, addressing the estimated 126 households living in RVs on the city’s streets, most of them around Rengstorff Park. The motion involved a list of measures designed to improve the quality of life for individuals and proposed steps such as funding ongoing research into the problem, hiring case and outreach workers and providing personal hygiene services such as showers and laundry for the homeless.

In a survey of RV owners before the motion passed, 43 percent of people polled identified Mountain View as the location of their last permanent home, and the majority reported economic factors and rent as reasons for losing their houses. The survey also estimated there are about 10 children among these homeless individuals.

These makeshift RV parks have sparked some controversy in the area, and recent complaints have been filed about the height of the RVs and the effect they have on the look and safety of the neighborhood.

Some parking restrictions have been implemented by the city, but inconsistently. Various driveways around Showers Drive have been marked “No parking,” while others have not. Along Crisanto Ave, thin metal strips sit suspended along lampposts where restrictive-parking signs had been put up and then taken down.

The City Council passed the motion six-to-one, councilmember John Inks being the only dissenter. He argues that making it easier for individuals to live in RVs is not a long-term solution to the problem.

“[The city] restricts these driveways and not the others, and says ‘Let’s spend some money to get the showers and the laundry,’ and in the meantime, the RVs are still there, so the surrounding neighbors are no more satisfied,” Inks said. “So that became the reason for me to say no, we shouldn’t just throw money at it.”

Mountain View’s lenient laws regarding sleeping in cars overnight — in relation to nearby areas — makes it a relatively attractive place to camp out. Inks said that the police department and park rangers have taken a hands-off approach to enforcing the rules, and as a result, some individuals have been able to call the streets of Mountain View home for years.

The motion also included possibly contracting “Dignity on Wheels” services one half-day per week. Dignity on Wheels is a program created by the non-profit WeHOPE and provides showers and laundry services to the homeless around the Bay Area. According to another RV dweller, this isn’t exactly what the RV owners need.

“What people really need is water,” a RV owner who requested anonymity said.

The RV owner and her husband drive weekly to a site in Redwood City to dump their gray water — dishwater, shower water, etc. — and black water — sewage — and refill the tank that feeds to the shower, toilet and sink in the back of their RV. Other individuals on the street hire United Site Services, a portable restroom and sanitation service, to come to Mountain View and replenish their water. According to her, however, it’s an expensive service.