MMEH Club: A Relaxed Approach to Art and Crafts 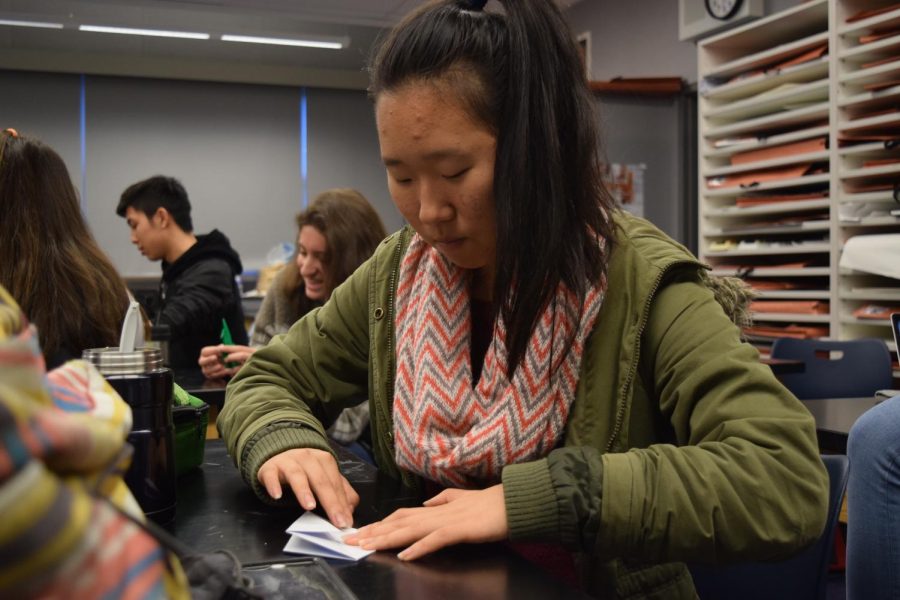 By Priya Dixit and Daphne Ih

A cheerful group of students enters the art room and begins to fold colored paper from a stack on the central table. Even after they settle down, the room is lively as they begin folding and creasing paper squares. Before long, the space is transformed into an origami menagerie of cranes. Other students opt to fold pinwheels and kangaroos, amidst the gentle chatter.

This is the Multi-Media-English-Housing Club, or “MMEH” for short. Club presidents juniors Emily Cheng and Jerilyn Lee didn’t originally have a meaning for the acronym portion of their name, as they intended the club to serve as a casual gathering place for students looking for art projects to work on in order to destress.

“Jerilyn and I just wanted to name our club ‘meh,’ but we needed a reason,” Emily said.

At weekly Monday meetings, members can choose to participate in activities like painting succulent pots and embroidering, or instead pursue individual crafts using the club’s supply of art materials. MMEH’s flexible structure is purposefully similar to that of Freestyle Art, one of Emily and Jerilyn’s favorite summer camps from elementary school.

During the week-long session, camp counselors introduced them to the unique styles of famous artists and challenged them to incorporate those techniques into their own renditions of well-known art pieces. But although projects and materials were always provided, what they enjoyed the most was that they were free to come up with their own craft ideas as well. Emily and Jerilyn wanted MMEH to take after Freestyle Art in that students would have a platform to create what they wanted while also enjoying themselves.

“[Freestyle Art] had a main project of the day, but [if] we didn’t want to do those projects, [it] was fine,” Jerilyn said. “For me, that was really interesting because I was never told that I could do what I wanted in art class.”

As technology continues to advance, the duo has noticed that STEM-centered careers have been dominating over art subjects and humanities. Surrounded by tech giants in the Silicon Valley, involvement in STEM fields has become the common local success stereotype, and all unrelated occupations are assumed to end in failure.

“If you aren’t on a science or math track, people [think] you’re going to end up [as a] broke beggar-of-an-artist on a street and [that] you’re never going to go anywhere in life,” Emily said. “That’s really not true, [and] we’re trying to promote the idea that taking an art or English major — or any liberal arts major — is not condemning yourself to living in poverty.”

As of right now, MMEH is only a 15-person club. But, after receiving a PTSA grant for purchasing art supplies, they now have the funding to expand and support many more students with art supplies for more extensive projects.

“It’d be horrible to invite people into our club and not be able to have the materials they need,” Emily said. “Now that we have money, we can do a better job of trying to recruit members and spreading the message about our club.”