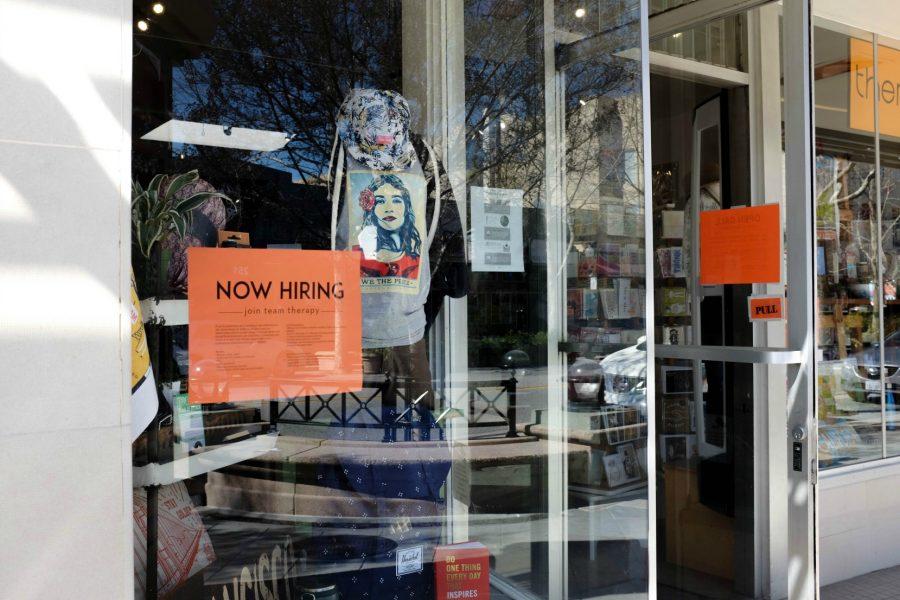 A sign on the window of boutique store Therapy in Mountain View reads "Now Hiring." Signs like this have popped up around businesses in the area as low-wage workers move out due to rising housing prices. Mountain View has increased minimum wages at an accelerated pace to combat this issue. Photo by Michael Sieffert.

In recent months, “Help Wanted” signs have cropped up in the windows of Mountain View restaurants. Businesses have been hit hard by a shortage of low-wage workers, which, according to Mountain View Mayor Ken Rosenberg, stems from increases in housing prices. To help alleviate this issue, Mountain View’s minimum wage rose this January from $11 to $13 per hour as part of a larger mandate to reach $15 per hour by next January. However, business owners have begun pushing back as a result of the decreases in profit that have accompanied the wage increases.

While California has implemented the same minimum wage goal of $15 per hour across the state by the later year of 2021, the rapid departure of low-wage workers in Mountain View has forced the city government toward more immediate action. The high cost of living and maintaining a job in Mountain View, Rosenberg says, can be alleviated by providing higher wages to workers.

“I believe that the high cost of living in Mountain View (and regionally) is affecting lower wage employees,” Rosenberg said in an email. “There is anecdotal evidence that Silicon Valley is losing people… [and in Mountain View] we are… increasing the minimum wage [to help with that].”

In terms of labor shortages, according to Ramen Izakaya Yu-Gen manager Kotaro Komori, the wage increase has helped create an influx of workers from other cities with lower minimum wages.

“My kitchen guys sometimes come from South San Jose, and they come on the Caltrain or something,” Komori said. “It’s because the minimum is up right now. Now, at $13, there’s more good money than in San Jose.”

Yet from a business owner’s perspective, the wage increase may not look so rosy. In order to sustain higher wages, many businesses have been forced to increase prices.

“From the customer perspective, the wage increases have meant multiple price increases,” Red Rock Coffee general manager Jean Boulanger said. “Everything is getting squeezed here , so the prices have to go up. We do the best we can to manage, but it’s not easy.”

Komori expressed similar concerns. His restaurant has raised prices by $0.50 due to decreased profits, and nearby restaurants have raised them even further. He expects he will have to follow suit.

“I’m so scared, because the minimum wage is going up,” Komori said. “I think about everything that is bad for the restaurant. Labor costs, food costs, everything is up. For the customer, the price is up.”

According to Rosenberg, one business, called Home Consignment, has cited minimum wage increases as a reason to close its doors. While he believes the increased wages will help low income workers, he noted that recent complaints over negative impacts on businesses are likely to increase with next January’s hike to $15 per hour.

“The city’s Economic Development Office has been hearing from various small business owners communicating that while the most recent minimum wage increase is affecting their business, the real impact is going to be the next increase to $15 per hour in approximately nine months,” Rosenberg said. “If the economy begins to wane, we expect to hear more concerns.”

Boulanger feels that, on a more general level, wage increases have been implemented too quickly for business owners to keep up financially.

“I had advocated that [Mountain View] let the minimum wage increase happen more gradually,” Boulanger said. “To go from $10 per hour to $15 per hour in just a couple years is a big adjustment. This is also happening at a time when rents for businesses are skyrocketing. Unfortunately, [Mountain View] decided not to listen to the business owners and managers, who wanted to phase in the change more slowly.”