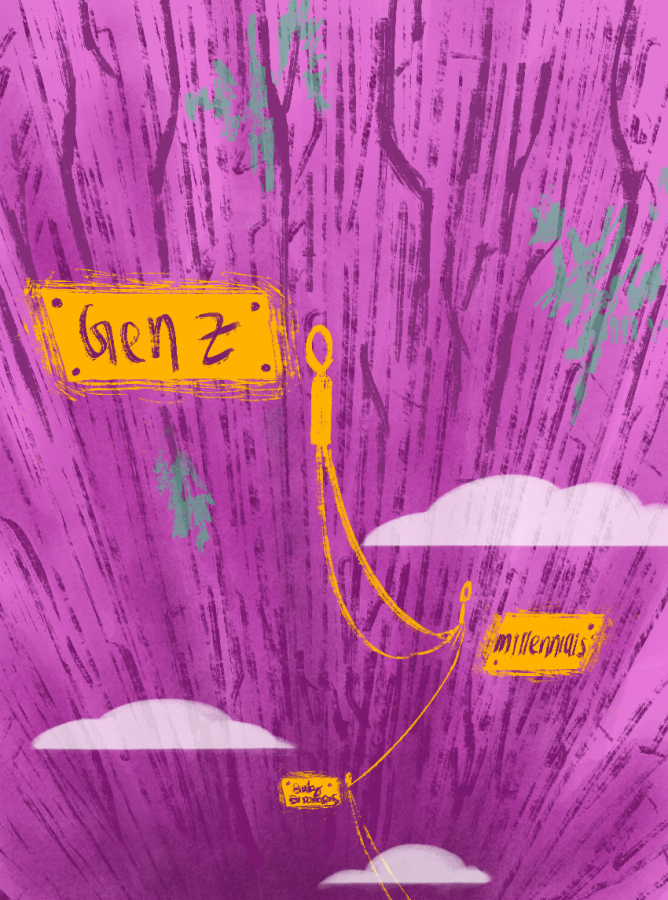 We were waiting in the checkout line at Costco when my male relative pointed and smirked at the cashier’s chest, commenting on her body image. I scolded him and told him to stop.

“Don’t tell me I’m wrong. I mind my own business and you mind yours. It’s natural to think and do things differently—it’s the generation gap.”

This excuse is often misused.

This wasn’t the only time I have noticed such odd and rude behavior. There had been other instances where he spoke out about how homosexuality is against nature and that women are naturally meant to be dependent on men.

I have already tried arguing with him. I have already tried convincing him that those past beliefs aren’t true and that his words will hurt others if he acts upon them. And I have learned that I have no control over whether or not he changes his mind.

But that same response resurfaces in every disagreement we have, and I am sick of it. It’s true that the generation gap represents our conflicting lifestyles and opinions but it should never be used as an excuse. People like him need to stop blaming their actions on the generation gap.

This gap poses a problem not only in my life but also everywhere ranging from the inside of a family’s home to the political world across a country. And currently, our nation is politically led by a white, 72-year-old Baby Boomer.

Our current president grew up in a world where women, queer and colored people had significantly fewer rights than they have today. There are definitely many other members of the same generation who have adapted and changed their perspectives as societal norms shifted, but there are also many—such as Mr. Trump—who still hold old-fashioned mindsets about minorities. Consequences of these shared opinions can include various mental health illnesses such as depression, anxiety and borderline personality disorder in those affected by the hate.

I do understand that members of older generations have wisdom through past experiences and I respect them. I also understand that they may be trying to preserve culture, religion or traditional ways of thinking. However, religion isn’t perfect, nor is a culture or a tradition. We are growing up in a world radically different from theirs. We have technology, medicine, media and more accessibility to information and education, and these traditions may not fully apply to our world anymore.

But when we hear–from them–that women should be treated like objects, homosexuality is unnatural or that Mexican immigrants are “criminals” and “rapists,” it hurts. It hurts because we hear these things from those we love and respect. It hurts because we are trying to live freely and those words are suppressing us.

Let’s also not forget the 64 million homeless LGBT+ youths out there. This number accounts for 40 percent of all homeless adolescents in general, and homosexuals account for about 7 percent of the population now. The proportions are way off and this discrepancy is caused by the many LGBT+ teens running away or getting kicked out of their homes. These youths who deserve a home like any other are being discriminated and rejected only because their parents or guardians refuse to admit that their religious beliefs or opinions aren’t always right.

Some teens are constantly reminded that they shouldn’t exist, that they’re not enough, that they weren’t born the right way, that they aren’t human or that their behavior or body image is unnatural or wrong. As teens and young adults, we are still growing and it’s hard not to believe what they say and not to blame yourself.

I’m not saying that members of the older generations are the only ones oppressing us with their depreciative opinions. These actions are terribly wrong and abusive from anyone from any generation.

However, my disagreement with some members of the older generation is that I do not think the generation gap excuses their degrading actions. Some of them think they have the right to emotionally and physically abuse us just because they know we think differently than they do. They may be right in the sense that the generation gap creates a rift in our opinions collectively, but they are wrong to assume they are always in the right and that being right is worth enough to damage our mental and physical health. And sadly, sometimes it’s no use to try to convince them to think otherwise–those people will not change until they want to.

But it’s not just them. Blaming your actions on others is an act of irresponsibility. There is no such thing as a perfect human, but that doesn’t mean we should stop trying to better ourselves. If it weren’t for those before us fighting for liberty or for equality we wouldn’t have the freedom we have right now. It is our turn to step up and fight the injustices in today’s society and our job is to make the word “right” even more so.

Don’t stop fighting the unjust, old-fashioned ways. We’re doing a great job protesting sexual assault with the #MeToo movement. We’re fighting for gun control. We’re standing up for same-sex marriages. The progress may be slow, but we are the future leaders of the world. We need to learn how to stand up for justice and for others before we take positions of power.

We are the future. The world is moving too fast and it’s up to us to catch up with it. It’s not a matter of who thinks what is “right” or “wrong” anymore. The meaning of “right” shifts with the world, and it’s time for them to go if they are slowing us down and hurting us for the sake of being “right.”

But also learn that you aren’t always right. Let yourself become vulnerable for a little bit and connect with those around you. Be responsible for your mistakes–don’t blame your domestic abuse on your childhood trauma. Don’t blame your past bullies on your own bullying. Don’t tell me it’s okay to objectify women because it was okay back then. Don’t drown in a cycle of your own guilt.

The future is ours, not theirs. If they don’t change for the better, the best we can do is to speak for ourselves and understand younger generations when it’s their turn to lead the world.