Matt Eberle Is Taking His Talents To Pomona 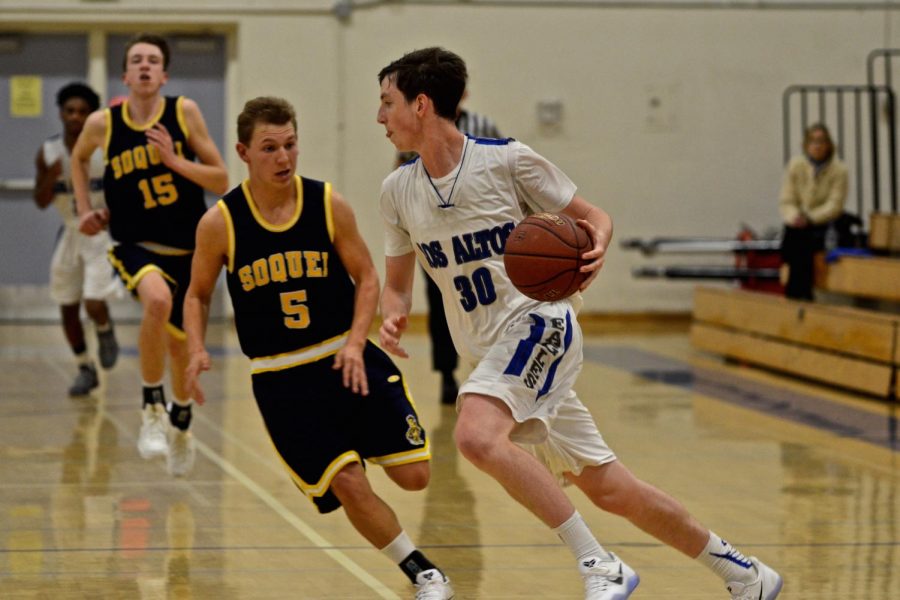 Eberle faces off against a Soquel player in a match last season.

Number 30 calmly dribbles up the floor. At 6-foot-5, he’s taller than most guards and quicker than most forwards — a nightmare of a matchup. He sizes up his poor defender with a couple of slick dribble moves, as if he is toying with him. Then, without hesitation, he elevates for a three-pointer.

Swish. The crowd erupts into cheers.

Anyone who has watched varsity boys basketball games over the past few years knows about senior Matt Eberle. While he may come off as a friendly, studious classmate who would be nice enough to let you borrow a pencil, on the court, he’s a merciless assassin.

“If I had to compare Matt to an NBA player it would be Klay Thompson,” senior teammate Nolan Brennan said. “He is an amazing shooter that also finds creative and crafty ways to score. What makes Matt stand out is his determination and drive in both school and basketball. I know that he has worked very hard in school and it has clearly paid off considering he will be playing at one of the top academic schools in the country.”

Driven by his passion for the game, Matt has invested copious amounts of time into improving his skills since the fourth grade. And it’s shown on the court, too. He’s a huge part of Los Altos’ basketball success; he’s been on Los Altos’ varsity team since he was a sophomore, and he became a co-captain of the team during his junior year.

“I remember I had the opening three versus Mountain View last year,” Matt said. “It was just a fun game to play in. I [also] had some game-winning free throws last year, and I remember I scored 25 points against Gunn. That was a big moment for me last year.”

Last summer, Matt attended a basketball camp at Brandeis University, a Division III basketball school where he caught the attention of many college coaches. Fast-forward a couple of months, and he’s now committed to Pomona College.

“[At the camp], I played pretty well and got some attention from probably 25 D3 schools,” Matt said. “I’ve kind of just been narrowing down and taking visits since then, and I decided on Pomona. I really like the campus, I love the location, I really like the coaching staff and the program.”

While Matt’s commitment is quite an achievement, it doesn’t come as a surprise to those who know him well. Many have helped him throughout this process, and he attributes most of the support to his dad and the coaches he has had through the years.

“I’ve really enjoyed the opportunity to coach Matt for the last year and a half,” Varsity Coach Trevor Naas said. “Matt worked hard to put himself in this position and it’s exciting to see him accomplish his goal of playing college basketball at a high[ly] academic school. The smile on his face says it all, he’s thrilled to be going to Pomona to play basketball and I couldn’t be happier for him.”

Matt takes a two-plus hour break from schoolwork everyday to train at the gym, and he can’t wait for what’s in store at Pomona. He’s itching to play in his first college basketball game, and he’ll be playing alongside former Eagle Daniel Rosenbaum ‘15. On the other hand, he’s excited about Pomona as a highly academic school and the educational opportunities it can offer for him.

“[I’m] definitely lifting weights and getting stronger,” Matt said. “That’s the major difference because I’m 18, and I’ll be playing against some 21, 22 year olds. I’m looking forward to just kind of getting that college basketball experience. But most of all, Pomona’s a great school, and I want to see how that liberal arts education helps me learn.”