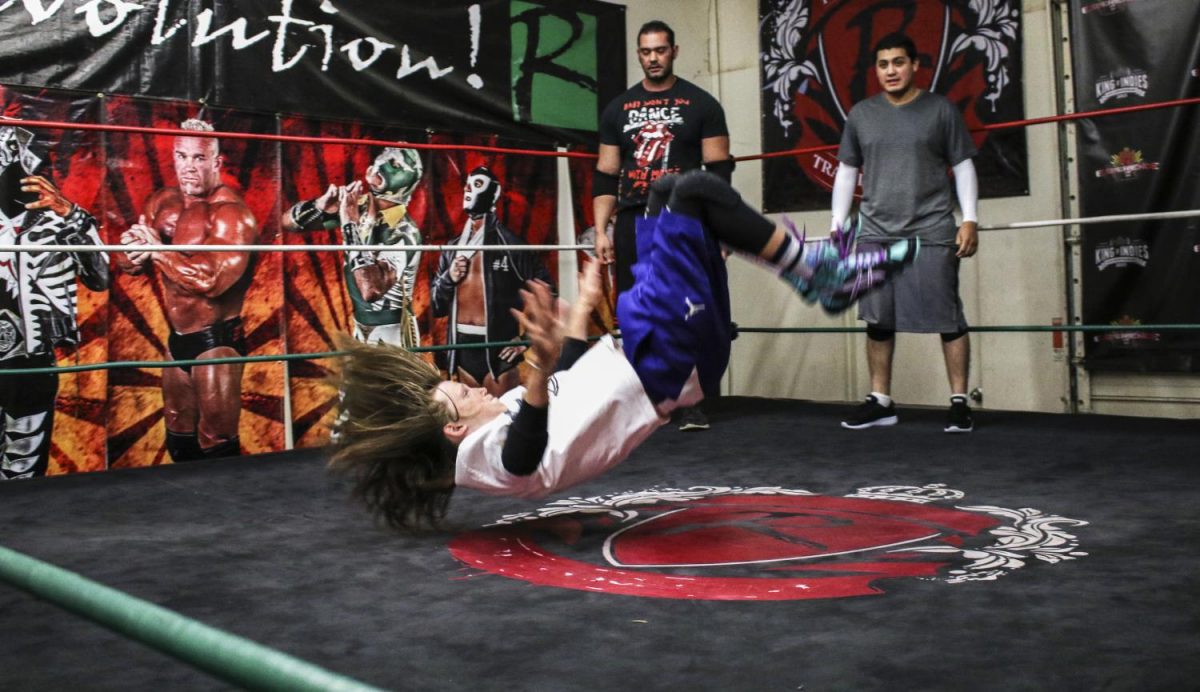 By Anisha Desai and Mayu Alten

Forearms raised to block their faces, two boys slowly circle each other. Grouped around the ring, fellow wrestlers shout words of encouragement. The audience, humming with anticipation, watches as the two mouth a few words to each other. All of a sudden, one of them charges at the other, ducking his head and slamming into his torso. The boy, Mason Kennerly, stumbles back into the ropes around the ring. He uses his momentum to fly at his opponent, arm retracting. With the rest of his strength, he smashes it into the other’s face.

Mason, a senior at Los Altos High School, has found an uncommon career to match his unique personality: professional performance wrestling. A veteran of both Broken Box and the wrestling team, the niche sport is the perfect combination of his two passions.

Unlike regular wrestling, performance wrestling is all about pleasing the audience. As each move is executed, the wrestlers inconspicuously whisper commands to each other in order to make a show of the fight. Since the acts are planned from beginning to end, it is made to tell a story. At the base of every one of them, there is a “good guy,” whom the audience roots for, and a “bad guy” that people want to see beaten. Although the results are predetermined, this doesn’t take anything away from the excitement around each match.

“The energy of wrestling fans is unlike any other… wrestling fans, I think, are the most passionate fans on the planet,” Mason said.

To him, part of the appeal of becoming a professional performance wrestler is the reaction he receives from the audience. He loves the overwhelming passion fans feel for the sport and how it translates into the matches. As a result, his lifelong dream is to qualify to perform at Wrestlemania, the top show in the wrestling industry.

Unfortunately, a large disadvantage he faces is his lack of experience. Even now, he regrets not starting official training sooner. Because he thought it was impossible for him to practice until he turned 18, Mason had to pave his own path toward his goal by taking acting classes and working out while continuing to research opportunities online.

“One day, at 3 a.m., I was looking at wrestling schools,” Mason said. “I found one in San Jose, so I looked, and it said that you can come if you are under 18. My entire life just flipped upside down in a matter of a day because I’ve always thought I can only really start my life [once I start wrestling], which [would be] after college.”

Determined as ever, Mason immediately began attending the Pro Wrestling Revolution Training School. However, beginning official training opened a whole new door to issues he hadn’t anticipated, including the pain he’d have to endure. The ring’s wood-paneled surface, which seems comfortably padded, can easily injure wrestlers even when they have their moves planned out. As a result, wrestling trainees devote much of their time to learning how to bump safely. Bumping safely requires the wrestlers to hit the mat at specific angles, spreading out the impact so that no specific body part takes the full force of the fall.

“The first bump [or fall] I ever took knocked the wind out of me so bad I had searing pain all through my midsection, my head got rocked, my tailbone is stinging,” Mason said. “Then you have to get back up and do it fifty more times.”

Troubling physical injuries forced Mason to question whether he wanted to follow through with his dream. Wrestling is one of today’s most dangerous sports because it is so mentally and physically demanding. Yet, Mason has persevered, even with the looming threats of serious injury. He stresses the importance of fearlessness while in the ring as it is his largest mental block. Because of this, he was moved to the advanced class less than a month after joining and began his even more difficult training.

Although performing at Wrestlemania continues to be an important goal for Mason, he is driven by a reason deeper than fame. Being able to use Wrestlemania’s platform would mean that he can reach a wider audience and inspire them by showing them that if he can take such an intense physical beating on a daily basis, they can endure their metaphorical ones too.

“It’s my meaning and my purpose to get to a level where I can inspire as many people as possible,” Mason said. “Wrestlers in a lot of ways have looked at superheroes and super-villains, and that’s why they’re so inspiring. Seeing real life superheroes battle in front of you — you just want to be a part of that, and you want to get inspired by that.”