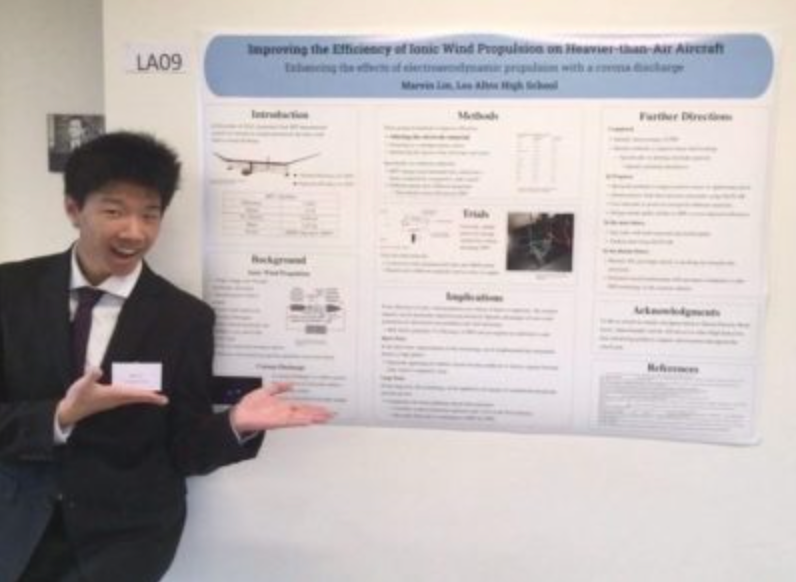 Class of 2020 graduate Marvin Lin researched aerospace engineering and sustainable energy, specifically ionized wind propulsion to create a more efficient plane design for his project. Unlike other students who focused more on biology and chemistry based approaches, Marvin involved both physics and engineering in his research in an attempt to improve a plane design created by MIT.

What brought Class of 2020 graduate Marvin Lin to ASI was the creativity and originality that came with the class. There, he was able to research topics that could potentially impact the world outside of the classroom setting.

“I like going through the process of trying to discover something new in the scientific field rather than reading what someone else did in a paper,” Marvin said.

His project was based on a plane design created in 2018 by MIT that had no propellers, turbine blades or fans. Instead, the plane used ions to generate enough thrust to get the plane airborne for an extended period of time.

In an experiment conducted the same year, MIT’s efficiency was calculated to be 2.56 percent, the efficiency being the ratio of outputted energy compared to the inputted energy.

In Marvin’s smaller scale research, he planned to verify whether the alteration of certain variables of the plane would yield various efficiencies and to build a more efficient replica of MIT’s original plane based on those variables. Marvin also looked to improve the plane’s efficiency by ultimately finding a way to input less energy, while outputting more.

Due to the limitations of COVID-19, Marvin had to work around being unable to do any physical research at home. He had access to articles and papers concerning his research, but he had not been able to physically create any part of his project during quarantine because his supplies were all still at school.

Additionally, conducting his experiments on campus was also safer with Dressen and other trained professionals standing by, as well as extra protective gear. For instance, Marvin’s project used 400 kilovolts of electricity to power the electric field, which could be harmful to the human body if physical contact is made.

Leading up to the virtual presentation, Marvin was unsure how his research would be received since he had fewer tangible results than his peers. The experience, however, ended up going much better than he anticipated.

“I felt like my project was going to be underwhelming compared to the other ones, but everyone respects the research others are doing,” Marvin said. “Since each person researches their own project for the entire year, there’s so much depth to the presentation, which makes every project interesting.”

Marvin’s presentation had great results despite his challenges, and he left ASI with a new outlook on the researching process.

Even though Marvin’s research was cut short in high school, he hopes to continue researching in the aerospace field at the Boeing Company near where he plans to attend the University of Washington in the fall.