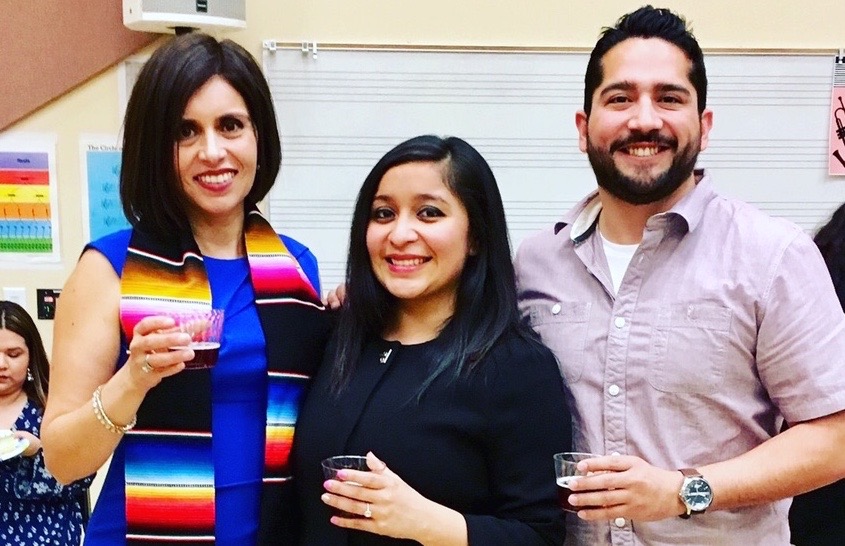 Margarita Navarro celebrates at Capuchino High School’s Latino Senior Celebration, where she was given an award for her outstanding contributions as an assistant principal. She poses next to one of her former AVID students who gave the Keynote speech praising Navarro for her efforts toward aiding Spanish-speaking families. Next school year, Navarro will become the Associate Superintendent of Los Altos High School.

From spearheading programs like AVID to teaching her peers in high school and college as a tutor and teacher’s aide, new Associate Superintendent Margarita Navarro has searched for ways to assist others throughout her life. Navarro’s dreams of becoming a teacher began when she was a 9-year-old in third grade. Instead of climbing the playground or playing tag, she wanted to teach her friends math.

“Whether it’s teaching math using chalk on the sidewalk or looking for ways to support my peers in high school and college, I always look for ways to help others,” Navarro said. “Teaching and helping others is ingrained in me. It’s part of my DNA.”

Navarro attributes her desire to help others and her work ethic to her parents, who immigrated from Mexico in the 1960s as immigrant farm workers. But her parents knew that they wanted their children to have more opportunities than them, so in 1985, her dad opened a restaurant in Half Moon Bay named Tres Amigos that he still manages today.

“My parents always wanted to seek higher heights, higher places, because that meant that they could better provide for their family,” Navarro said. “The more successful that they were, the more successful their children were going to be. To this day, they’re in their 70s, and they’re still working hard.”

As a teacher at Woodside and administrator at the Sequoia District from 1996 to 2010, Navarro facilitated the implementation of an AVID program with another staff member, which became an enduring success and a large portion of her legacy. The program aided typically underrepresented first-generation students and became a resource that increased access to higher education.

A few months ago, one of Navarro’s former AVID students reached out to her over social media and helped her with a mentoring and job-sharing project for current AVID students. Her student had majored in law and public administration at Berkeley and Harvard, and recently passed the bar to join a prestigious law firm.

“She was a first-generation student to go to college, and we supported her 100 percent, and look at the heights that she’s been able to reach,” Navarro said. “Now she’s mentoring my students, and I love that it’s come full circle. It’s amazing… I think my legacy at Woodside is that I know I’ve had a huge impact on the lives of students there.”

As an assistant principal at Capuchino from 2010 to 2017, Navarro increased parent involvement for Spanish-speaking families by streamlining the implementation of a Parents for Quality Education (PIQE), which is a nine-week program that teaches parents about the college application process and how to engage in their children’s academic lives. Previously, parent engagement had been low due to a lack of resources and language barriers.

“I remember there were only six people at a special meeting just for Spanish-speaking families, even though Spanish-speaking students are 40 percent of our school population,” Navarro said. “I asked myself, ‘How is it that out of 600 people, six people come?’”

Navarro’s success at building a robust program at Capuchino has made her less needed there, but she views this in a positive light — it means that she’s left behind a permanent structure that will continue to change the lives of students.

“I feel like I’ve implemented change and transformed and been part of something transformative,” Navarro said. “I’ve hired great people who will carry on my legacy and leave these great systems in place, and it’s like I’ve become obsolete, which is great. I want people to function outside of me, independently, to be self-sustainable.”

Because of her program’s permanence at Capuchino, Navarro wanted to find a new place to continue her mission to help others. When San Mateo Union School District Superintendent Kevin Skelley saw an opening for an associate superintendent at MVLA, he recommended it to Navarro based on her past successes.

“When Dr. Skelly brought the new position to my attention, I was very excited because MVLA’s already doing some amazing things, but it’s great fertile ground for me to design, implement and evaluate new programs,” Navarro said.

MVLA Superintendent Jeff Harding believes Navarro will be a strong contribution to the school district, gradually taking over former Associate Superintendent of Educational Resources Brigitte Sarraf’s role and collaborating with her as Sarraf remains as a part-time worker.

“[Navarro’s] very intelligent, extremely articulate and passionate,” Harding said. “She has a long track record of student success as an AVID coordinator and teacher coach, and has worked at similar schools to ours.”

Drawing from her experience, Navarro plans to come into the district with an open mind and learn about current programs before giving input. For her, a foundation for an informed rationale is a priority that will better her to help students, and everyone else, reach their highest potential.

“I want to talk to students, parents, teachers and support staff to be a good listener… and learn about the community,” Navarro said. “I know that this is a hard job and that associate superintendents have to make some pretty tough decisions, which is a responsibility I take very seriously. At the end of the day, these decisions have an impact on the lives of kids, families, teachers and staff.”