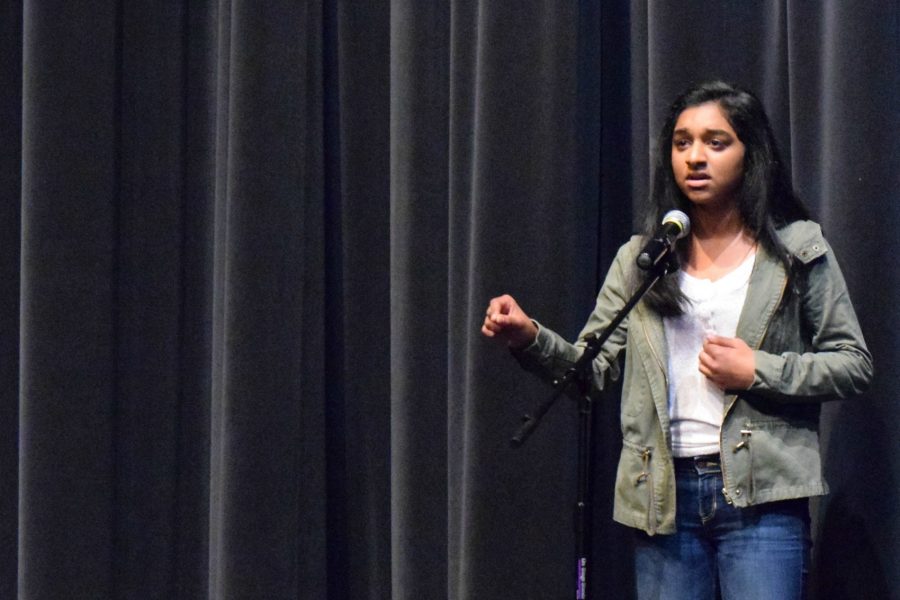 By Priya Dixit and Yolanda Spura

“Worth” — something freshman Mahita Bobba has struggled to feel throughout her life, and the name of the slam poem that she performed at the Freshman Poetry Slam in February, in which she won first place.

“The basis of my poem was feminism ,” Mahita said. “[A woman] doesn’t need a male figure to deem her worth. She is powerful, she is beautiful and she is worth something regardless of who she’s with or regardless of who makes her powerful.”

Mahita feels that sexism and traditional gender roles have strongly impacted her throughout her life. Ever since her mom had to quit her job to take care of her and her sister, taking on the role of a stay-at-home mom, Mahita felt the imbalance between women and men in society, as her father could have just as easily done the same.

Watching her mom, who she saw and still sees as her main role model in life, give up something she loved made Mahita realize that she wanted to fight for gender equality.

“My mom had to quit her job to take care of me and my sister [even though] my dad could have done it,” Mahita said. “I understand he loves to work, but so does my mom, and she was willing to give up her job [to take care of us]. Sometimes I see her, and she’s working really hard at home. She does a lot for us, for my sister and me. It’s sad to see that she had to give up her life for us.”

Despite the fact that her mother sacrificed her career as a software engineer to take care of Mahita and her siblings, she supported and inspired Mahita to embark in stereotypically male-dominated activities and endeavors, such as starting Lego Robotics at the age of 6 in an otherwise all-male team.

“There [is] one thing she always [wants] me to do in life,” Mahita said. “She… wants me to be equal to the boys… I was the only girl because my mom was like, ‘I want you to be equal, I want you to show them that you can do it too.’ And I think that all those instances in my life built up to who I am today.”

In addition to guidance and support from her mother, Mahita believes her strong investment in feminism and ultimate inspiration for the values behind her poem came from her sister as well. When Mahita was in fifth or sixth grade, she asked her sister what the meaning of feminism was.

Mahita demonstrated her support of these ideals by attending the Women’s March on Inauguration Day and has become involved in a new club recently formed on campus.

“I’ve been working with Ms. Adler, who recently started a club called FUSE, which stands for Freedom Unity Safety Equality, and one of the big things we’re going to tackle is women’s rights,” Mahita said. “We want to attend protests, we want to be very active in our community.”

Though inspiration for the poem was not difficult to find, Mahita grappled with a lack of self-confidence in her journey to the performance.

“I’ve struggled with feeling that I am not worth a lot… The first step for me to go and present that poem [at the poetry slam] was to get confidence in myself,” Mahita said. “If I hadn’t had the confidence, and if I hadn’t taken that first step, I probably would have chickened out… But I was like, ‘You know what, I need to go out here, not only for myself, but for everybody who can’t speak for themselves.’”

Despite some nerves before her performance, Mahita went through with performing due to her dedication to her message. She feels that the central theme of feminism in her poem is an important one for others to hear and become educated about.

“You don’t need any validation,” Mahita said. “No one needs to stamp your resume. You can do whatever the heck you want… We’re always seen as the weaker sex, we’re not as strong… In the sense of education, and women being political figures, we are equal… We can be equal… We are the same. That’s an equal playing field… That’s what I wanted to get across because I’m a huge believer in equality for all.”