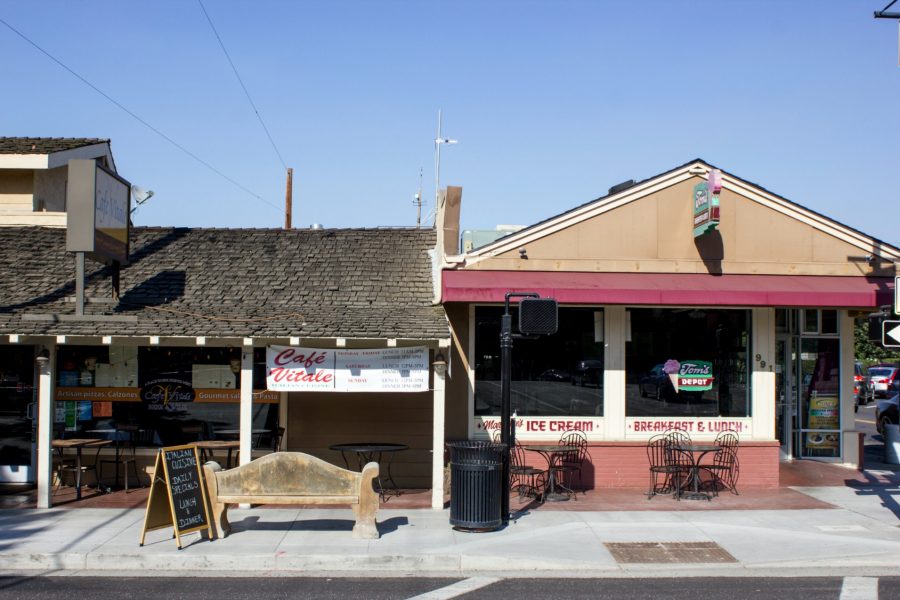 Tom's Depot and Cafe Vitale are a couple of the businesses that still remain in Loyola Corners. A meeting was hosted at Tom's Depot this May to discuss zoning laws that could determine the economic vitality of the area. Photo by Kimia Shahidi.

Most people in Los Altos regard Loyola Corners as a small shopping district with a few restaurants, a bicycle store and other businesses that exemplify the small-town feel of the area. However, after a local Safeway left the area in the 1990s, Loyola Corners lost many of the businesses that used to serve neighboring residents. The City Council plans to revitalize the area through a development plan update that attempts to increase business by reforming height limits on buildings and encouraging businesses.

“We looked back at what else had been done and realized…not much has taken place in Loyola Corners in the last 26 years since the plan was adopted in 1990, so we thought it would be a good idea to update the plan and get the community’s input and feedback again on what they thought the plan should include,” Community Development Director Jon Biggs said.

While multiple plans have sought to help the area, City Council largely left the area alone for the past couple decades. This February, City Council authorized the current update, which it aims to finish by the end of the year. City Council will then present the finalized the document to the public and send the plan to the Planning and Transportation Commission.

City Council is still deliberating on the issue of zoning laws, which concern the height and story limit of the area’s buildings. The topic divided residents and business owners, who differed on how much development should take place to allow for growth while keeping a neighborhood feel. The current height and story limit for buildings in Loyola Corners is two stories and thirty feet.

Residents were not receptive to increased development as many were concerned about buildings becoming too tall for the area. Business owners, on the other hand, expressed interest in being able to add extra stories to their buildings. For Drawn2Art owner Robin Sulic, the new developments represent a way to grow her business and encourage residents to shop in the area.

“I believe higher structures would not diminish the quality of the area, but might enhance it with more striking buildings which [would] help the public want to be [in Loyola Corners] and explore the businesses,” Sulic said.

Both business owners and residents had the opportunity to share their thoughts with the community at a meeting at Tom’s Depot, a restaurant in the Loyola Corners area. Around 80 to 100 people participated in the meeting this May. The City Council wanted to strike a balance between what residents and business owners would like to see in the area.

“Naturally, there’s a little bit of a rub between what the property owners in Loyola Corners would like to see and what the residents would like to see,” Biggs said. “We’re really trying to achieve a balance between the two, and at the end of the meeting there was an understanding between folks of what each was trying to accomplish.”

The meeting signified a progression in the development of the plan, as both residents and business owners came to an understanding on the topic of zoning laws.

“There are a number of strong feelings about this historic area, and it will be interesting to see how it all develops,” Sulic said. “Hopefully everyone will be able to come up with a plan and implement it so that most, if not all, of the residents and business and property owners are happy with the results.”

The update also prioritizes pedestrian safety and aims to fix sidewalks with uneven or cracked surfaces and color inconsistencies. Other changes include beautification by placing benches or street trees throughout the area.

“[The plan would serve as a] guidepost to do improvements to the public way [to] really identify Loyola Corners as a place to stop in and explore,” Biggs said.

The plan will still go through changes as various consultants and the public express their views on the update. An ongoing traffic circulation study will determine whether altering certain streets will make traffic circulation more efficient, and further economic analysis will show Loyola Corners’ ability to function as a shopping district.

“One thing that may cause some change in our thinking at this moment is just the results that come back from the traffic analysis and the economic study,” Biggs said. “We’ve got the majority of the work done on the plan, [but] it’s still subject to some potential changes before we are able to release it to the public.”