The Instagram meme account going by @losaltoshighmemes has recently made waves within Los Altos High School’s social ecosystem. The Talon was able to organize an exclusive interview with the creator, who has chosen to remain anonymous. 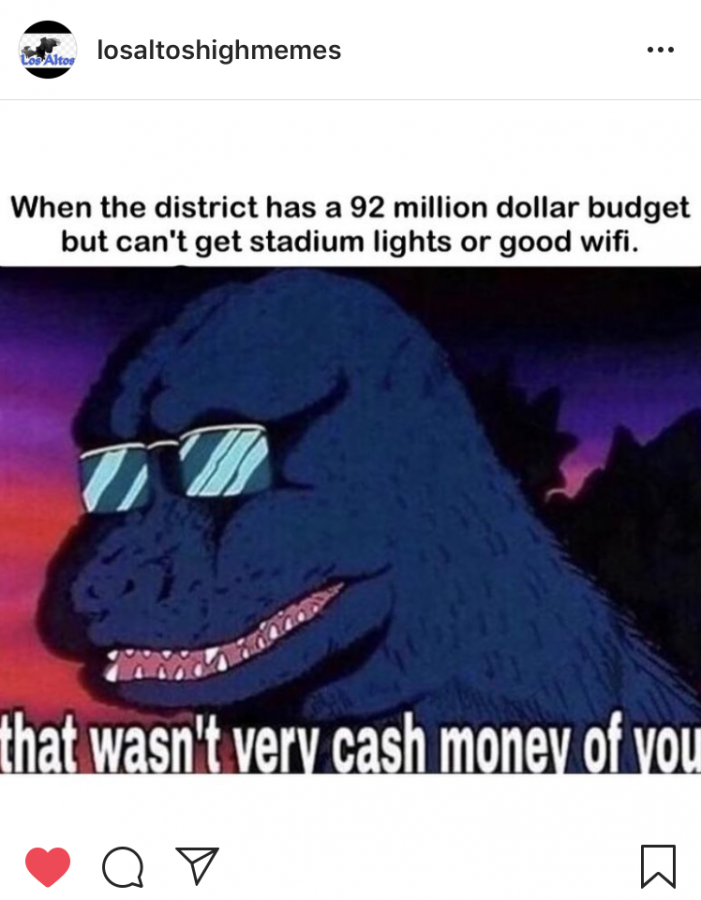 In the last few weeks, @losaltoshighmemes has racked up over 900 followers and established itself as Los Altos’ most popular meme page to date. The page purposely caters toward Los Altos High School students using memes that mainly focus on notable teachers, classes, campus occurrences, and school-wide inside jokes.

“That’s the joy of it,” the creator said. “It’s a little special thing [that] you can only really understand if you go to Los Altos.”

Initially, the creator made the account just to have a good laugh. But as they started gathering followers, it soon became more than a personal source of humor.

“It’s honestly just for sh*ts and giggles,” they said. ”At the beginning I was like, ‘I want this to make me laugh,’ but now that it’s making other people laugh, it’s kind of like a benefit.”

According to the creator, @losaltoshighmemes avoids dark humor or “edgy memes” in order to keep the overall impact of the account positive. They fully acknowledge that these memes can be funny as long as they don’t take things too far, but a small fear of administration reprimand keeps them from using these memes.

For this reason, they wanted to stay anonymous. Anonymity is a common practice among online meme accounts to protect the administrator from public backlash.

“Say I do get exposed— I don’t want admin to find screenshots and rescind my letter of recommendation or something,” they said. “This was supposed to [be] a low stakes thing. I don’t want to make this something bigger than it is.”

According to the creator, maintaining a secret identity has a larger purpose in uniting students. They see a divide between different social cliques in the school and are attempting to bridge that with humor and mystery.

“Maybe I’m digging too deep into this, but I think [that] as a school, we [often] make judgements [about] people and I think it’s really nice to just not have to worry about where something you can enjoy is coming from,” they said.

Anonymity also has much to do with the sudden popularity of the account, according to Los Altos senior Kai Moos.

“[Anonymity] adds more mystery and interest,” Kai said. “This person could be your best friend or your worst enemy. That’s facts.”

Los Altos is not to fear for lack of juicy memes in the future however. The hype on campus and the net positive impact associated with the page may keep the account running, according to the creator. When asked if they would consider passing the page on as a legacy, they were very excited about the prospect of a legacy page.

“I think that would be cute and fun, I mean, why not?” they said in our interview, “If it’s still popular… by the end of the year, yeah I’ll definitely hand it off.”