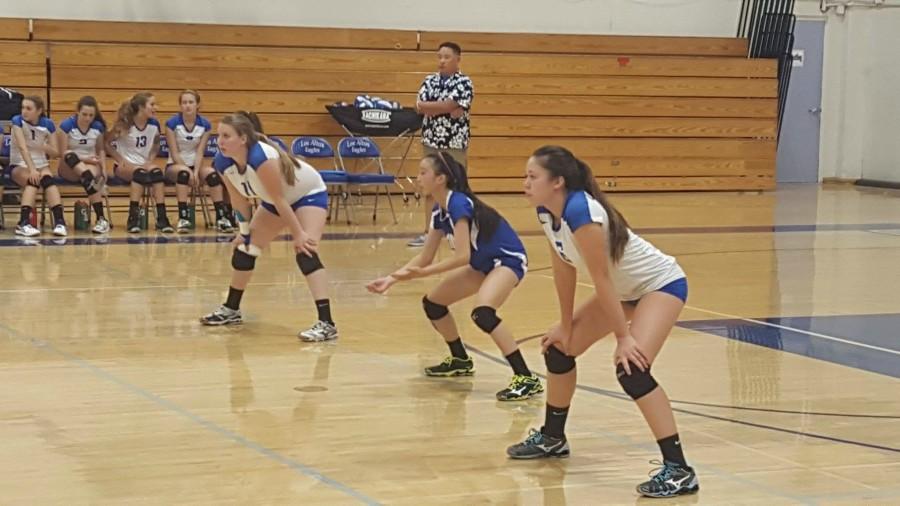 The Eagles started out strong in the first set, jumping out to a 4-1 lead. Saratoga gradually began to score, but Los Altos was already firmly in control. A quick run put the Eagles up 14-7, forcing the Falcons to take a timeout. However, Los Altos maintained the momentum out of the stoppage, winning the set in a commanding fashion, 25-10.

The Eagles continued to perform during the second set. Saratoga called another timeout after the Eagles rocketed ahead to a 9-1 lead. The Falcons picked it up, but Los Altos held a stable lead thanks to great defense and solid blocking.

“We’ve been working on [blocking] a lot,” junior Katherine Mumm said. “[We have] definitely been putting in the hours during practice.”

The Eagles rode the defense to another easy set win, this time 25-14.

However, the third match proved to be a challenge.

The beginning of the set started out close, with both teams tied at 5-5. Then, Saratoga went on a run to bring the score to 15-20, but the Eagles refused to give up, going on a streak of their own to tie the game at 20-20. After trading points, sophomore Hanadi Nassif gave the Eagles the lead with a short spike, making the score 22-21. Los Altos added another point to the lead, but the Falcons came back and ultimately won the set 25-23.

The fourth and final set started out promising. Los Altos jumped out to a three point lead, but Saratoga caught up to tie the score at 4-4. Saratoga then took the lead by one, and the teams went back and forth. Finally, Los Altos took a 10-9 lead and never looked back. With some impressive saves and more solid blocking, went on a 7-0 run to put the game out of reach. Senior Megan Wilhelm sent the final ball off the block and out of bounds to finalize the 25-16 win.

The win gives the Eagles a 4-1 record in the De Anza League. Their next game is Monday, October 12 at home against St. Ignatius.