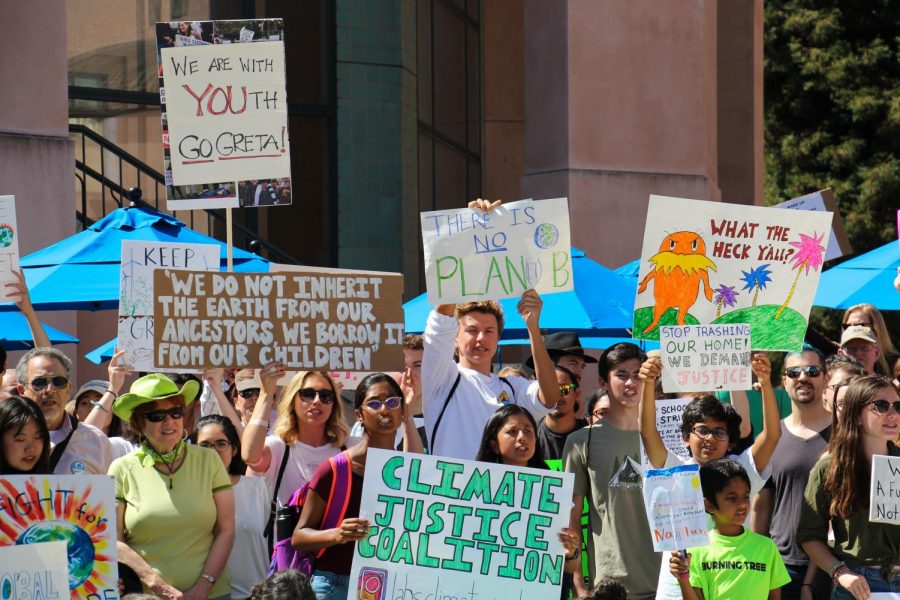 By Kaavya Butaney and Nina Crofts

The student protestors were inspired by a fellow high school student, Greta Thunberg, a sixteen-year-old Swedish environmental advocate and founder of the Climate Strike movement. Climate change is a global issue that will raise the global temperature, thereby causing rising ocean levels and reducing biodiversity.

The Climate Justice Coalition was founded at the end of last year by seniors Vivienne Coy, Lia Tsur and Anna Fletcher with history teacher Seth Donnelly as their advisor. According to Vivienne, it was not a club made to support and fundraise, but one made on the will to protest as a community of students and activists.

“More people need to know about this issue [and] be educated about it,” freshman Trishla Dedhia said. “By striking out of school, we bring this issue to the attention of so many other people.”

Most of the students didn’t want to skip school, but they felt it was the best way to take on the issue.

“We want to make our voices heard,” senior Lexi Crilley said. “We can no longer save the world by playing by the rules.”

Students participating in the march met in the quad at brunch and began to march to Mountain View City Hall, accompanied by Donnelly and history teacher Katherine Orozco. Along the way, they shouted chants such as “This is what democracy looks like!” and “Hey-hey, ho-ho, climate change has got to go!” At around 11:10 a.m, the group reached Mountain View City Hall and the students gave speeches about their views of the climate crisis. An independently organized strike at the CalTrain station joined them at the plaza; the group claimed their strike was motivated by student activism.

According to Orozco, this march did not have a political purpose but rather a humanitarian one focused on the idea that climate change affects everyone, regardless of one’s political views.

However, despite what the intentions may have been, President of the Conservative Student Union senior Ethan Clarke, who participated in the march, thought it targeted Republicans, specifically President Trump.

“I saw people’s signs saying, ‘burn the GOP, f*ck Trump,” Ethan said. “That is not tolerance.”

Furthermore, although the march was for the environment, not everyone agreed on what the best solution was.

“Everything from Exxon Mobil to all these other large corporations, they’re just being selfish and not caring about the planet that is around us,” freshman Logan Kim said.

While many, like Logan, advocated for increased government environmental regulations, Ethan had a different view. His solution was for the government to provide monetary incentives to corporations and individuals who implemented environmentally friendly practices.

But when it came to the reasons behind the strike, many students felt the same way.

“I wish we could do things by the book,” senior Trevor Prunty said. “But that’s obviously not working. We need to be loud and disruptive. We need to let [the government] know, we need to prove to them and show them that what they have done has screwed us and other future generations over.”