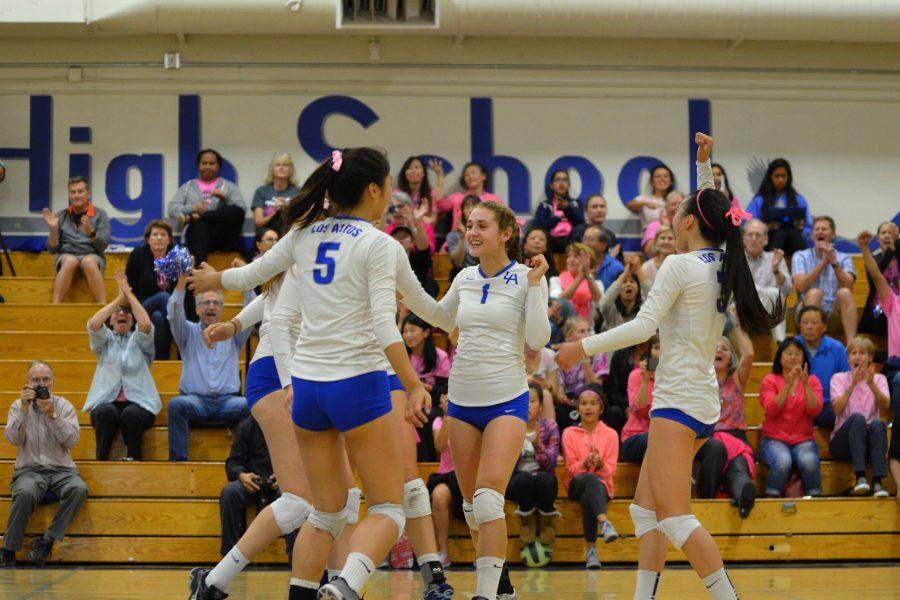 The Eagles started the first set slowly, letting Palo Alto get ahead of them with easy points. After a three-point serving run by senior co-captain Kate Carlson, Los Altos maintained a tight but consistent lead, and won the first set with a score of 25-21. In the second set, Paly stepped up its game, but Los Altos was more energized as well. Senior Kat Mumm and junior Hanadi Nassif blew the crowd away with 9 total kills, and junior Jamie Kesten and Kate clinched the set at 25-22 with a solid block.

However, the Eagles lost their focus in the third set, letting balls drop straight to the floor without anyone diving and unsuccessfully blocking. Los Altos’ lack of communication led Paly to pull away the third set 24-17. In order to win the whole match, Los Altos needed to claim the fourth set. They did so with renewed vigor. After several long rallies and a four-point serving run by junior Aevia Trainor, the Eagles’ win was secured after a missed serve from Paly.

Senior and co-captain Lauren Limbach was pleased with the outcome.

“It was really awesome to beat Paly,” Lauren said. “They’re undefeated and first in our league, so it was a really huge step up for us to beat them. We lost to them the first time around and we really wanted to come out here tonight, especially it being Dig Pink, and get this win.”

The fundraising goal for last night’s game was $3000, and it was 70% completed even before the game started. Donors can either give a set amount of money or contribute a certain amount for each “dig” (when a team returns the ball after an opponent’s attack) during the match.

Senior co-captain Kate Carlson appreciated the community aspect of the event as well.

“People from the community who wouldn’t necessarily come are here, and that’s awesome,” Kate said.

The Eagles’ next home game will be against Lynbrook, on Tuesday, October 18.