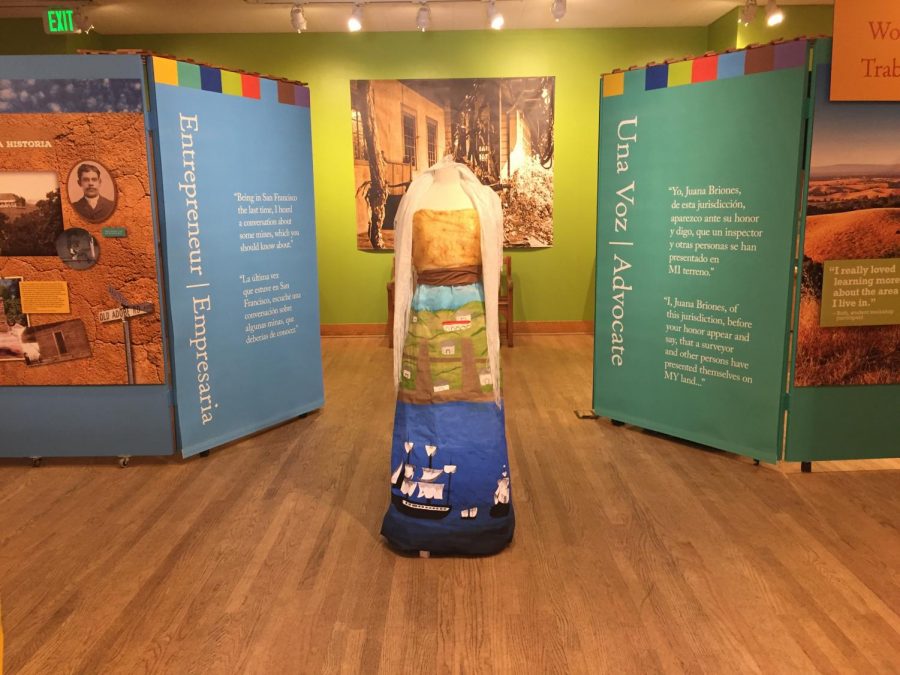 By Cathy Wang and Daniela Gloster

Juana Briones was an immigrant that built a prosperous life for herself through hard work and courage in 1840s California. Born in Santa Cruz in 1802, Briones’s mother came with the Anza Expedition in 1776. The story about this first generation Mexican American a triumph and all too familiar to the many immigrant families in America today.  just like her, their struggle and bravery have remained largely undermined and forgotten. The Los Altos History Museum is trying to remedy this fact through their new exhibit, “Inspired by Juana: La Doña de la Frontera.”

Briones was an independent woman who started and ran a prosperous business, tended a farm in what is now present-day Los Altos Hills, and raised a family of eight kids on her own after divorcing her abusive husband. During a time in which women and minorities were not well respected, Briones was able to and become well-respected and successful.

“Inspired by Juana” aims to capture Briones in her entirety through the four sections of the exhibit, each labeled in both English and Spanish. The four panels explore Briones’ role as an entrepreneur (empresario), healer (curandera), advocate (una voz) and matriarch (matriarca). Supplemental facts and works of art are displayed alongside the panels, working together to create an accurate representation of Briones’s life and the period she lived in.

Various pieces in the exhibit are made by a group of teenagers who participated in the museum’s teen summer program. The aim of the program was to educate the participants about Briones so that they could create pieces using what they learned in order to help educate the public. The program used a combination of lectures taught by college professors, primary documents and activities. Los Altos senior Nayelli Rodriguez, who participated in the program, felt especially connected to Briones and her story and learned much more than just facts.

“After discovering Juana, I felt more empowered in everything I did,” Nayelli said. “I felt that I had a voice and that I could share my thoughts with people without being judged. Juana Briones was a single mom like my mom. She filed a divorce by herself and made her own business. I want to [use] her as a role model and focus on [my] future so I can be my own businesswoman and a strong woman.”

The bilingual exhibit aims to celebrate Briones’s cultural heritage to help traditionally underrepresented people like Nayelli feel seen and empowered. Moreover, through “Inspired by Juana,” the Los Altos History Museum is educating the local community about a woman who once owned and operated an important part of our area but was, more than that, an unapologetic powerhouse of a woman that would have been rare in the time she lived.

“You should definitely come to the exhibit, it’s really nice and there’s so much to learn about her,” Nayelli said.

The exhibit is open Thursday through Sunday from 12 p.m. to 4 p.m., at the Los Altos History Museum. The Juana Briones exhibit is up through March 31.