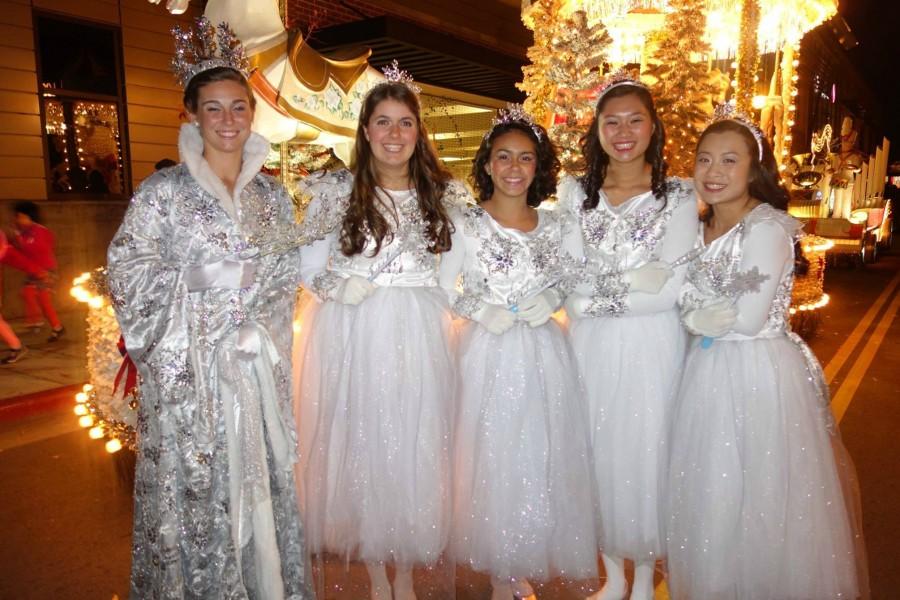 The Festival of Lights is a Los Altos tradition that has been welcoming the holiday season for the past 38 years and gives people from all age groups the opportunity to connect with other generations.

The parade, which takes place downtown, allows people of all ages to enjoy music from local high school marching bands, as well as floats and characters that fall under the theme of “A Child’s Holiday Fantasy.” Characters featured in the parade range from Peter Pan to The Wizard of Oz. The parade also gives high schoolers the opportunity to complete school-required service hours by helping out.

“We use teenagers and high school students who help us bring the characters out,” board member Nancy Schneider said.

Additionally, students also have the opportunity to march in the parade, as many organizations are involved with the community event.

“It was really fun, but a little nerve-racking to be in front of so many people,” drum major senior Rory Maclean said. “I think the parade is appealing because the whole town is there, and many people have friends in the parade.”

The festival gives the opportunity for people of all ages to connect over a common experience.
“We helped set up and prepare for the parade, and then we watched it afterward,” junior Krishna Brunton said. “All the lights and floats were beautifully decorated, and we had a great time. It was cool to see so many people working hard to put together this one event.”

As a way to give back to the community, five girls are chosen to walk in the parade as “snow princesses.’

“I was chosen to be a snow princess, one of the five girls who walk alongside the first float in the parade,” senior Kelsey Moran said. “The ‘snow court’ is made up of five high school senior or older girls who have demonstrated extensive service to the Los Altos community. This year, my jump rope team, Sol Jumpers, also performed in the parade with light up ropes… so I switched out my princess costume for my Sol Jumpers uniform and ran back to jump the last block with them.”

The parade began when merchants Hope Higbee, Jack Huston and Marion Jackston wanted to create a light parade to introduce holiday spirit for the city of Los Altos. This led to the creation of the volunteer organization, coined the Festival of Lights Association, that runs the parade. Over the years, the parade has grown in size and remains a yearly highlight for community members.

The Festival of Lights Association maintains the costs of the parade through community support, donations and grants. Not including costumes or new floats, the operating expenses to run the parade is about $20,000 each year.

“We have our own floats that we own, and people are sponsors so they give donations to put their signs [on the floats],” Schneider said. “Individuals can put [signs] on a float if they want to, as long as it meets the criteria for safety and size.”

There are numerous challenges involved in planning the parade.

“One of our challenges is people setting up early downtown,” Schneider said. “The merchants downtown get upset because the sidewalks are clogged. [Another] challenge is to redo our old floats. We just did a float this year that used to be the drummer boy, and it’s 20 years old.”

With the challenge of aging floats comes inspiration to make the parade relatable to new generations of viewers.

“[This year] we designed Captain Hook’s boat,” Schneider said. “It’s really cute, and it’s going with our other characters from Peter Pan. We want to keep [the parade] fresh and exciting. People like to see old familiar floats which is important to maintain, but they also like to see something new. It’s such a wonderful event for the kids and community.”

Some parade-goers come to support their friends who perform in the parade.

“The [number] of LAHS students in the parade encourages high schoolers to come,” alumna Karen Zellers ‘15 said. “The parade would be more appealing if even more high school clubs got involved.”

With each parade, the group celebrates its successes, while evaluating areas for improvement.

“Right after the parade we have a critique session,” Schneider said. “We get together and say this is what we liked about the parade and this is what needs improvement… After the parade on Sunday is when it’s fresh in our minds and [we] see what we can do better [for next year].”