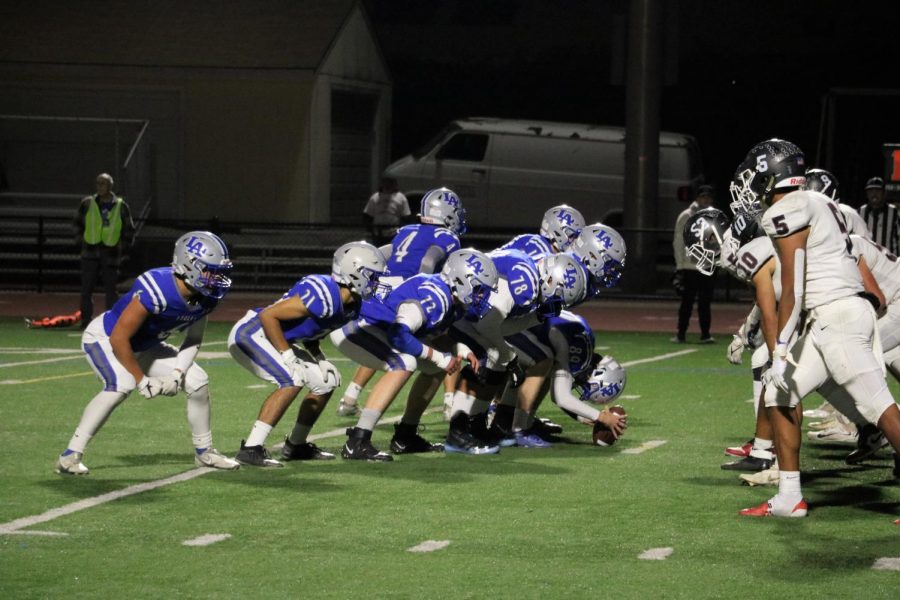 The Los Altos football team prepares for a snap. The Eagles ultimately lost 56–35 against the Sharks of St. Francis Salesian College Preparatory, capping off their season.

The Los Altos High School football team ended its triumphant season at the Central Coast Section Division V semifinals against St. Francis Salesian College Preparatory last Friday, November 19, in a 56–35 loss. Despite the defeat, the season marks the first time the team has won a playoff game in 15 years.

The Eagles put on a show with neck-to-neck action in the first two quarters of the game. Running back seniors Mingaang Park and Greg Schumann led the first two Eagle touchdowns after Mingaang recovered a fumbled ball and Greg received a handover. But the Sharks fought back and earned two touchdowns, evening the score at 14-all.

Wide receiver and safety junior Zach Fagin then ran a lightning fast 95-yard touchdown; however, that lead was soon matched after the Sharks made another touchdown, making the score 21-all. With 16 seconds left in the first half, Zach then pulled the team ahead 28–21 with his second touchdown.

As the fog and rain settled down over halftime, the game tipped in the Sharks’ favor. Zach’s touchdown early in the third quarter and wide receiver senior Cole Rafferty’s touchdown in the fourth weren’t enough to keep the Sharks from scoring five touchdowns to gain a 21-point lead by the end of the game.

With some slipping passes, it seemed like the rain played a considerable role in the Eagles’ loss; in fact, this was the team’s first and only rain game of the season. Despite this unforeseen weather, Zach explains that it wasn’t the main reason for the team’s setback.

“Yeah, water gets on the gloves and it gets a little slippery, but it’s definitely not an excuse,” Zach said. “I think the real main issue is that we were missing a lot of tackles on defense.”

Although the Eagles’ run ended earlier than they had hoped, the season was still “spectacular,” according to lineman sophomore Peter Very. He credits the team’s success to a combination of both star players and harmonious teamwork.

“Once we realized that playoffs were a real possibility, we were playing for the seniors,” Peter said. “Other than that, we played for the guys around us and improved everyone’s attitude … We also have a wonderful quarterback, probably one of the best quarterbacks in our state to be honest.”

That quarterback is sophomore Jimmy Flynn. He credits Head Coach Dave DeGeronimo for helping him grow as a player ever since last year.

“He took me under his shoulder from JV and really stuck with me,” Jimmy said. “We worked it out during the summers, and I have to give it to [DeGeronimo] for all those times he took me in.”

With players like Jimmy returning next year, the team looks to continue progressing and competing at a higher level in the playoffs — and that starts by getting back to work immediately.

“Next year we’re going to dominate,” Peter said. “We’re going to come back out and play harder than we did this year.”

Ben Chua contributed to the interviews in this report.